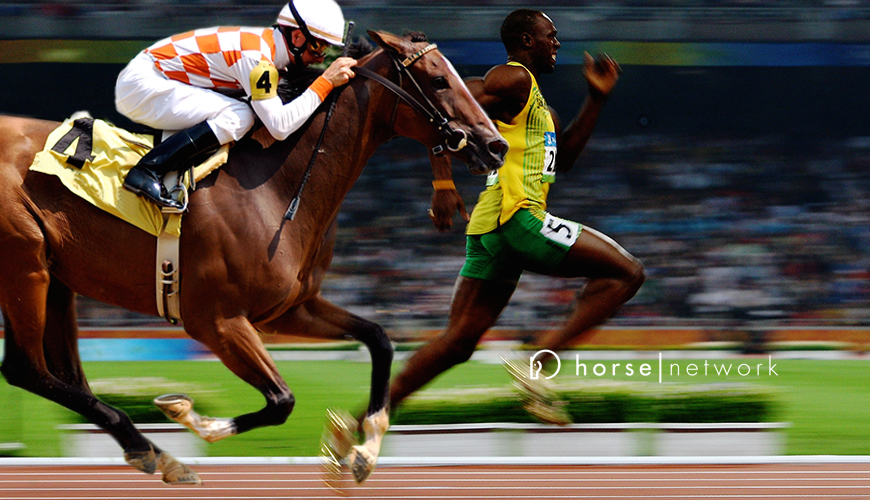 The enduring relationship between human and horse is one of the world’s most significant developments. Once domesticated, horses literally changed the course of human civilization. Even in the modern mechanized world man and beast continue a proud, cooperative co-existence. Nowhere is this more evidenced than in the sporting sector, where we humans utilize keen horsemanship to harness the power, athleticism and grace for the ultimate goal: RIBBONS! Oh, and cash. And high-fives from your peers.

It’s a partnership of compassion and competition; human and horse united against the field, the clock, the panel and each other.

But what happens when humans compete against horses?

Pretty simple, really: the average thoroughbred racehorse at full gallop can cruise at 30-40mph and maintain such a pace for extended distances. Conversely, the world’s fastest human, Usain Bolt, has been clocked as high as 28mph during a 100m sprint. 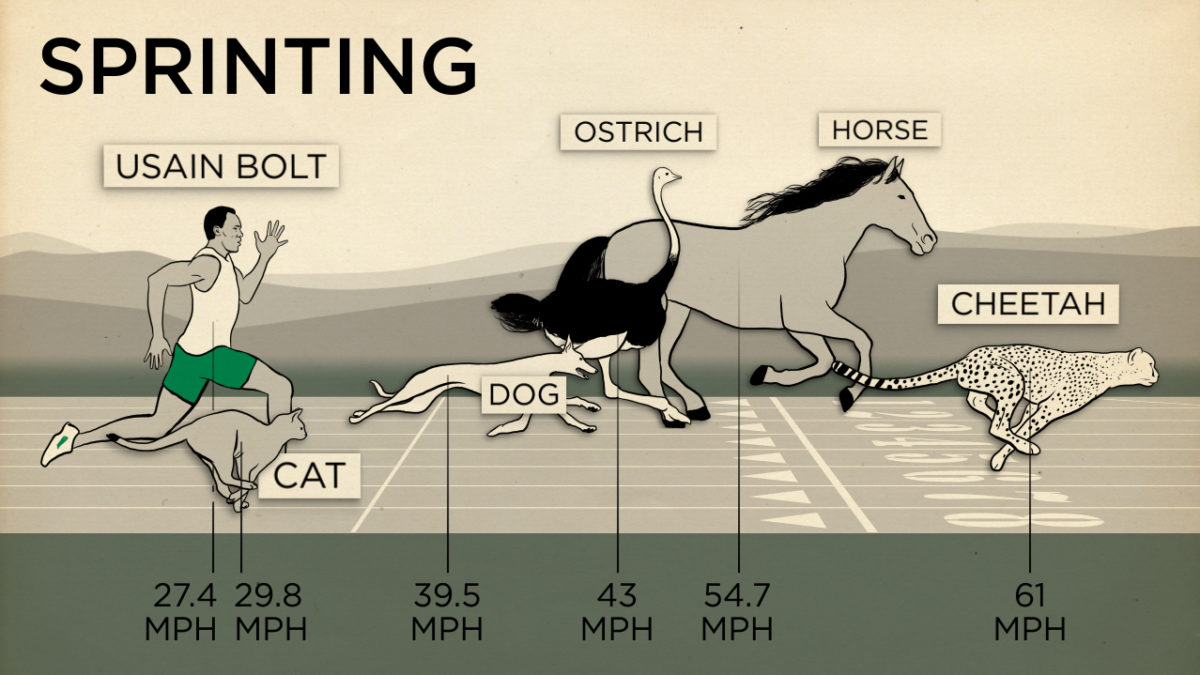 Racehorses are literally bred for speed and stamina, while humans are bred for speeding while texting. Clearly, any sort of speed competition between these mammals would be an exercise in futility—the human’s preferred form. 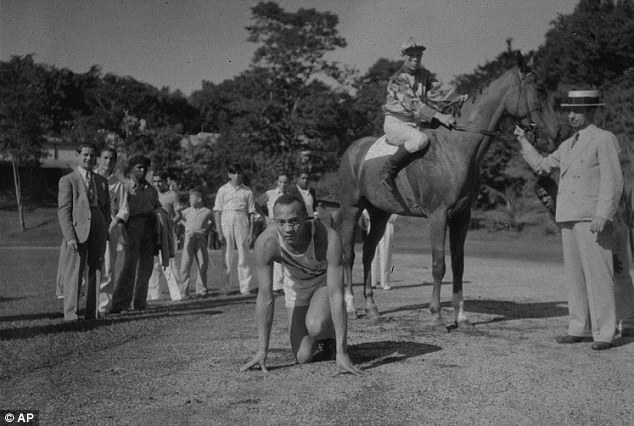 Jesse Owens is one of the most celebrated Olympians in history, but what you may not know is Owens raced numerous horses in paid promotional gigs around the world. One such race went down in Cuba, where Owens was given a slight head start in a 100 yard dash, overcame blatant cheating yet emerged victorious because that’s what heroes do.

Well past his prime but eager for the challenge, former world champion sprinter Jamie Baulch lined up against a tiring racehorse named Peopleton Brook in a 100m contest for charity at Britain’s Kempton Park in 2010. Strong out of the blocks with a good head start, Baulch looked like he might just pull it off…for a second or two, anyway.

Former pro football player Chad Johnson utilized his incredible size, speed and toughness to become a standout in the NFL, and in 2007, the loquacious wide-receiver put his speed to the test in a charity stunt with a racehorse named Restore the Roar. Johnson was spotted a 100m cushion in the 1-furlong sprint, which incredibly, proved to be enough, and Johnson won for fun. Rigged? Perhaps. Impressive? Well yeah. 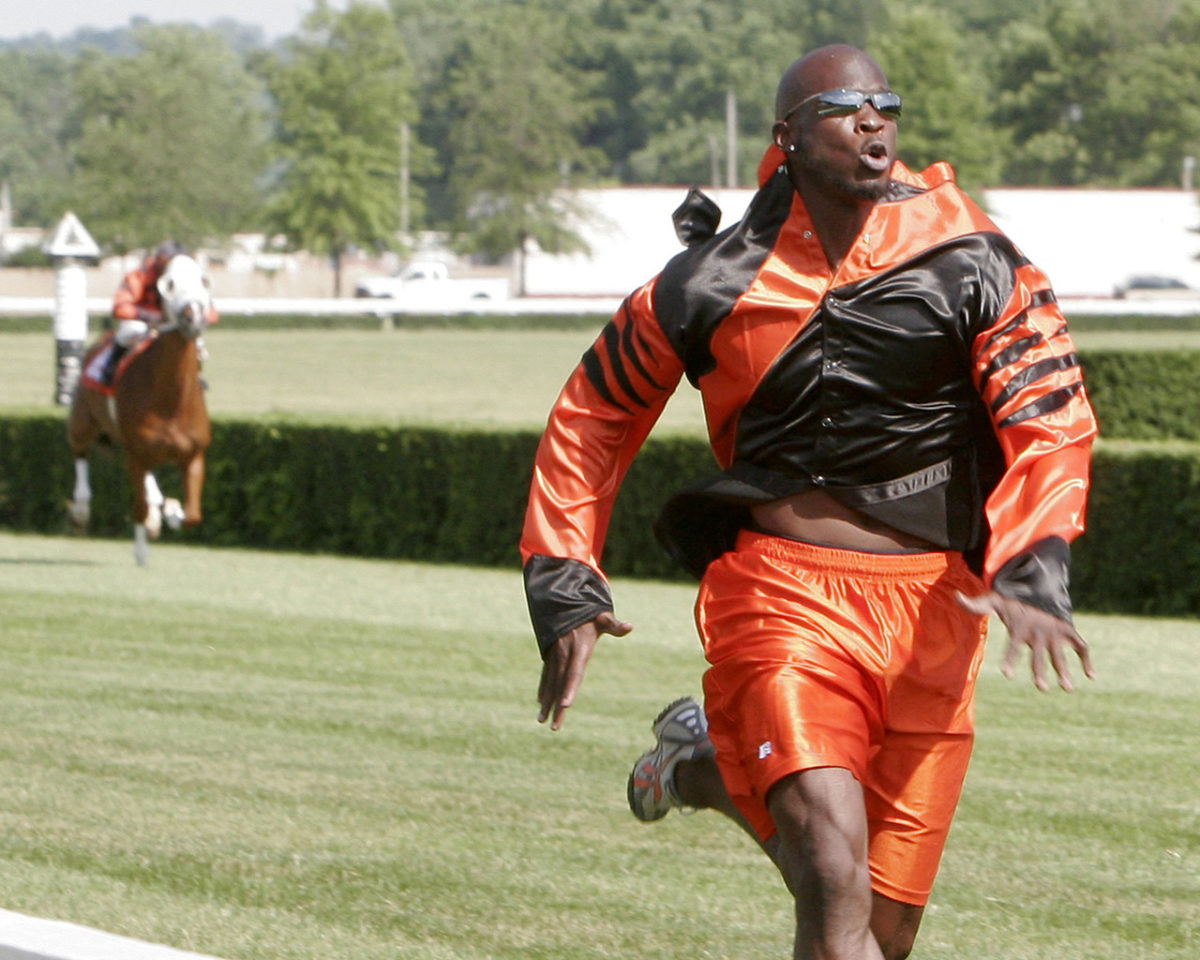 What would happen if humans were not given a head start, and had to break from the starting gate alongside an actual racehorse? Thanks to Edmonton’s Northlands Park, we have the answer, and it’s hilariously predictable.

Every racetrack has its own set of rules, but there is one universal law we can all agree upon: the horses run on the track, while the humans watch from the stands. This is a good rule, but rules, as well all know, were made to be broken. 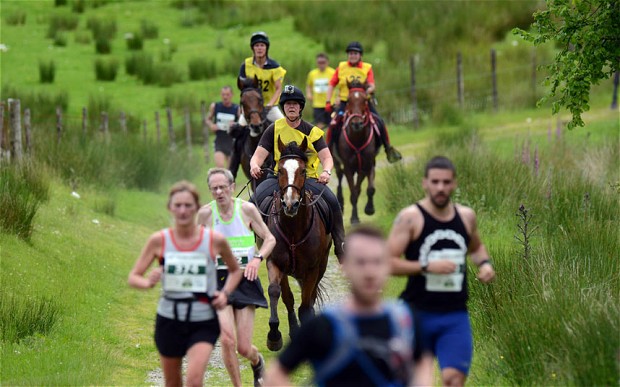 Would you believe there exists an annual endurance race pitting humans against horses? Of course you would because as a fellow human you are fully aware that human foolhardiness is boundless. Since 1980, ambitious athletes have flocked to Wales for the Man Versus Horse Marathon, a 22 mile stampede through the rugged countryside, where runners compete against riders on horseback. AMAZINGLY, a human has defeated the horses in TWICE, in 2004 and 2007. I suppose it’s an advantage when you can bypass the vet-checks, but still, that’s aggressive.

So what have we learned here?

1. 4 legs are faster than 2, unless handicapped by ridiculous head starts and/or delayed by vet checks.

2. Slow thoroughbreds are much faster than the fastest humans.