So Much #TerribleHorseAdvice, So Little Time

Home > Blog > Horse Play > So Much #TerribleHorseAdvice, So Little Time 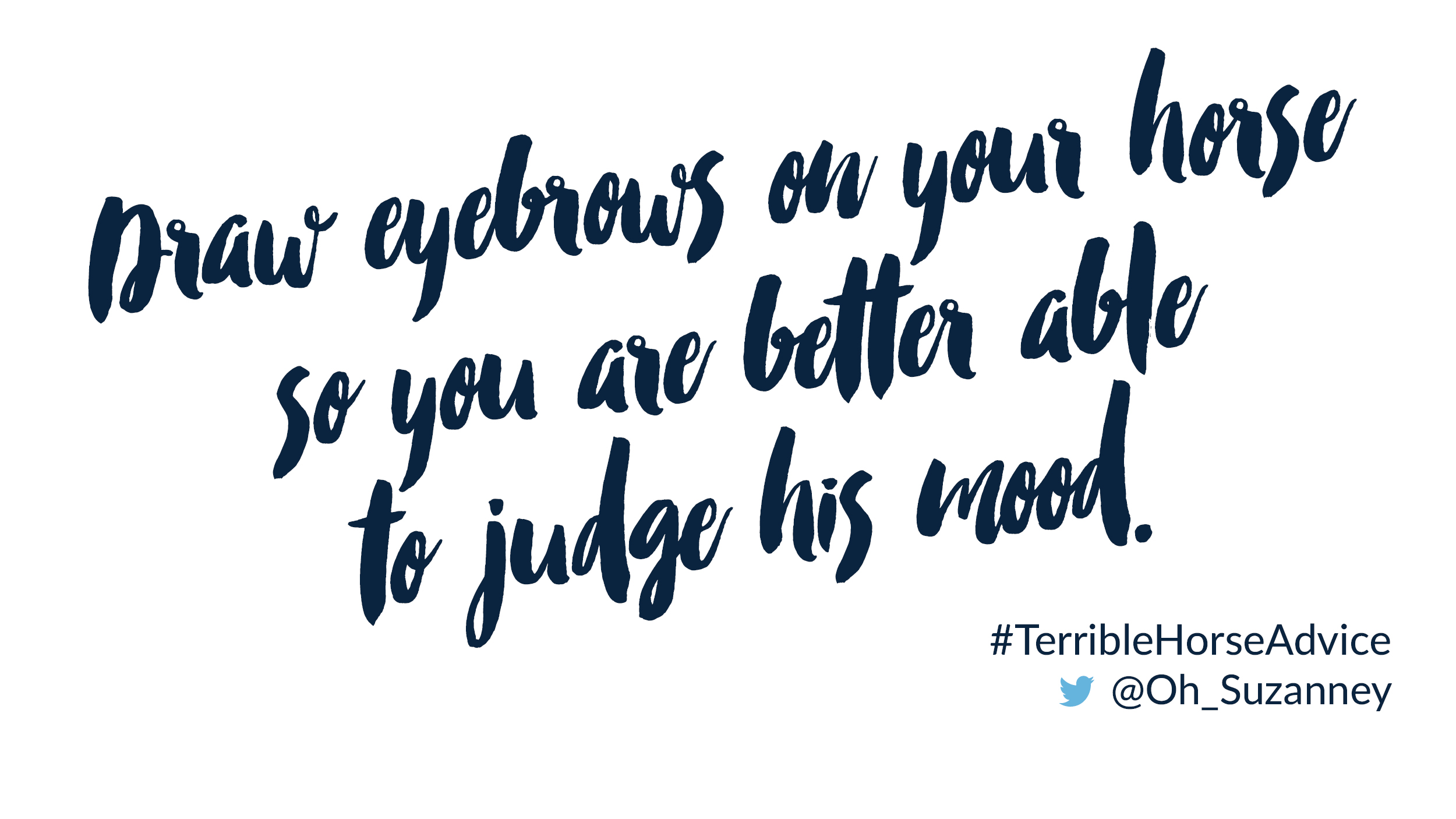 Whether you have a question about horse care, are looking for a proven training tip, or want to up your horse show game, excellent advice from reputable sources can be found on the Internet. This is not that.

Horses can adapt to anything quickly, they're really laid back and have very strong digestive systems

Oh all your polos are dirty? Just use standing wraps! #TerribleHorseAdvice

it's very time-efficient to walk under your horse to switch sides when picking out their feet! #TerribleHorseAdvice @HorseNetwrk

Keep bugs off your horse by spraying it thoroughly with RAID. #TerribleHorseAdvice

Any saddle can fit your horse if you layer enough saddle pads.#TerribleHorseAdvice

Bathe your grey in bleach to make it extra white! Horses get bitten and kicked all the time, won't feel a thing!#TerribleHorseAdvice

That protruding nail in the stall is too high. Won't be a problem. #TerribleHorseAdvice

Draw eyebrows on your horse so you are better able to judge his mood. #TerribleHorseAdvice

The pretty red ribbon in that horse's tail is just his way of expressing himself.#TerribleHorseAdvice

#TerribleHorseAdvice
Teaching your horse to rear is a great way to improve your bond!!

#TerribleHorseAdvice helmets actually do more harm than good when you fall off, don't wear one!

Run your horse on the barrels everyday! It will keep them calm and sane!! #TerribleHorseAdvice

"Science has proven the inside rein is the key to lead changes. The harder, the better."#TerribleHorseAdvice

"My trainer says I don't need any dressage lessons because we do jumpers."

if u don't see a distance, just drop your leg n lean up your horse's neck- I promise they'll save your butt every time! #TerribleHorseAdvice

On buying a horse…

Green riders should buy green horses so they can learn together. #TerribleHorseAdvice

You don't need to try the horse before you buy it. Just look at the pictures #TerribleHorseAdvice

If you're buying a horse, make sure to choose your favorite colour! #TerribleHorseAdvice

"Judges really love it when you take fashion risks"

If you're feeling nervous before your round goes, drink a bottle of wine beforehand. #TerribleHorseAdvice

You should totally wear all neon in the show ring ! The judges will love it ! #TerribleHorseAdvice

if you don't do well in your current division, you should move up #TerribleHorseAdvice

If your trainer says you're not ready to move up, they're trying to hold back your talent. Time to get a new trainer!#TerribleHorseAdvice

"7yo young jumpers is for kids, right?"

And just about everything else…

If it has a uterus, breed it.#TerribleHorseAdvice

Everyone in the horse industry is trustworthy and they're all in it solely for the love of the animals & the sport!#TerribleHorseAdvice

It's very easy to get rich by working with horses.#TerribleHorseAdvice

The advice is terrible. The laughs are real.