Sunday Silence: A Fighter ‘Til the End

Home > Blog > History > Sunday Silence: A Fighter ‘Til the End 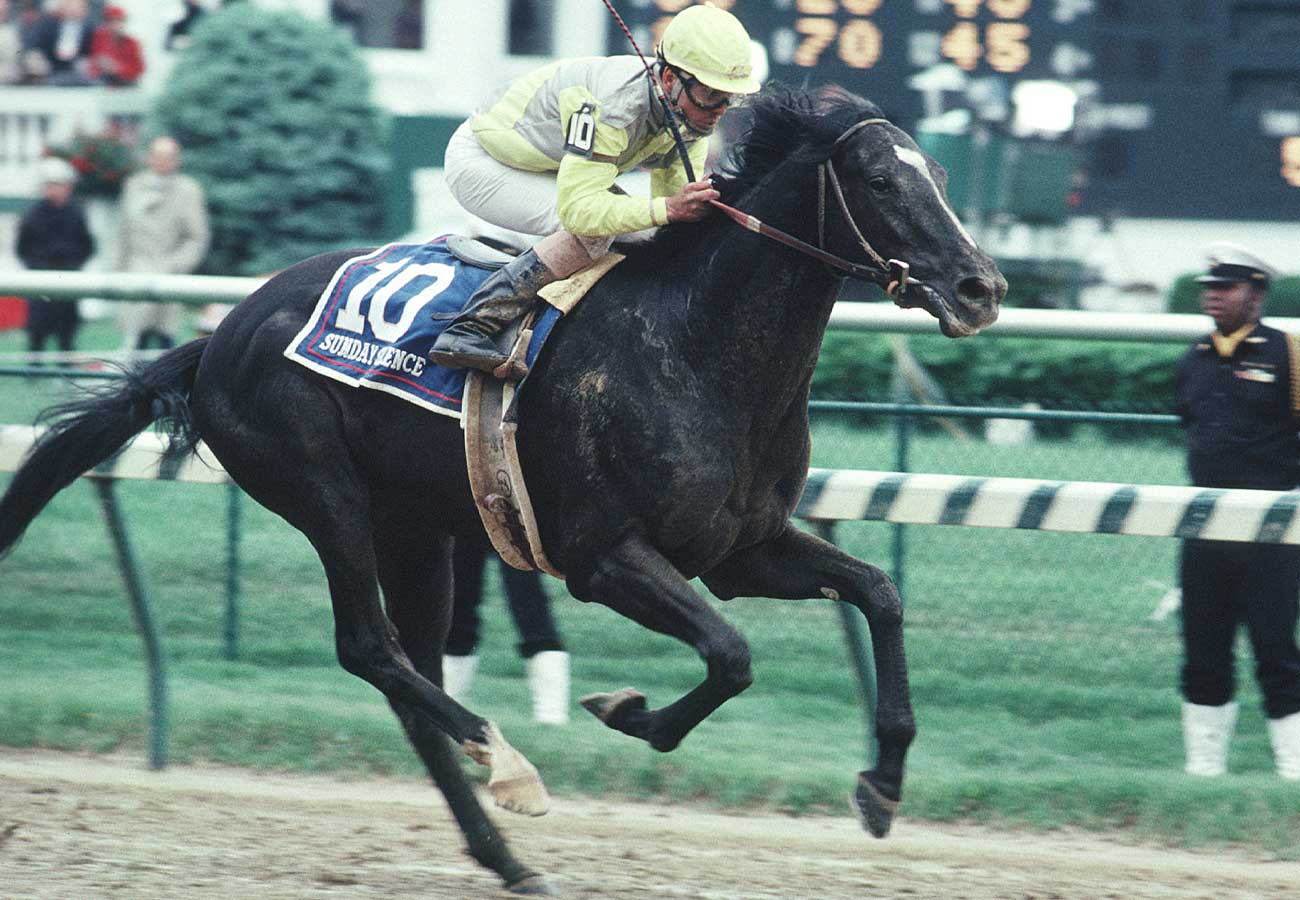 He arrived 30 years ago today. Undersized and bow-legged, no one could have predicted back then this charcoal son of Halo would soon reach the pinnacle of his sport. That he would defy conventional wisdom, transcend expectation, vanquish all comers and captivate the world in a brief but extraordinary career. Who could have imagined this horse no one wanted would be remembered forever? But that’s horse racing. It’s no ordinary sport, and Sunday Silence was certainly no ordinary horse.

The fact he ever made it to the races at all is miraculous. He was born on March 25, 1986, at Arthur Hancock III’s budding Stone Farm in Paris, KY to a mare named Wishing Well. It’s a slice of bluegrass that has produced numerous winners through the decades, but at first glance, this newcomer did not exhibit the appearance of the next one. As a weanling, he contracted a virus that nearly cost him his life. However, he fought back and pulled through—a harbinger of things to come.

Despite his conformational shortcomings Hancock brought Sunday Silence to Keeneland’s July Yearling Sale on behalf of the colt’s breeder, Oak Cliff Thoroughbreds. Overshadowed by a catalog of bigger, straighter and superiorly bred bloodstock, Sunday Silence slipped through the auction largely unnoticed. With no bidders Hancock plunked down $17,000, and back to the farm they went.

The following year, Sunday Silence shipped out to California for a 2-year-olds in training auction. Once again, his appearance did little to sway buyers, so Hancock wrote a check for $32,000 and arranged to bring the colt back to Kentucky.

Halfway through the van ride home on a desolate Texas highway, the driver suffered a fatal heart attack which sent the van barreling off road and into a ditch, flipping over and tossing around everything it contained. Somehow, Sunday Silence emerged from the wreckage frightened but largely unscathed. An unlikely winner, once again.

Hancock wasn’t quite ready to give up on his homebred, and in reality, he couldn’t afford to. In building up his thoroughbred operation, Hancock found himself overextended and on the verge of insolvency. He began searching for partners and eventually convinced legendary California trainer Charlie Whittingham to buy a share in the colt and bring him out to his barn.

It didn’t take long for Sunday Silence to flash his potential. Whittingham famously called up his friend in Kentucky with a simple message: “That black son of a bitch can run a little bit.”

Sunday Silence made his debut in October of 1988 at Santa Anita Park. Proving his connections right, he overcame his inexperience and finished 2nd. His next effort came just a couple weeks later at Hollywood Park, where he put his raw ability on full display, smashing the field by 10 lengths. Whittingham gave the colt a few months off to fill into his growing frame, and fill in he did.

By March, Sunday Silence was blossoming into a force. His hind legs were slightly askew and his temperament testy at best, his raw ability and grit could not be denied. Off the track he was a handful. Fiery and independent, but once he hit the track he knew exactly what he needed to do and raced with a head full of vengeance. He turned corners like a barrel racer and once he got the lead, there wasn’t an animal on the planet that was going to pass him by. It was as if he was aware of the doubters and carried a chip on his shoulder each time he entered the gate. He wasn’t just running to win, he was running to make sure everyone else lost.

“He was the perfect example of an ugly duckling that turns into a swan with age,” said Hancock. “Like the skinny teenager that develops into a big strong athlete, some horses are just a little late in maturing.”

After sweeping the 3-year-old stakes at Santa Anita in the spring of ’89, Sunday Silence was once again headed back home to Kentucky, only this time the destination was Churchill Downs for the Kentucky Derby.

It was here in Louisville where the rivalry was born and the legend of Sunday Silence truly took hold. Here, he would lock up for the first time with the horse for which he would become synonymous, Easy Goer. It was East Coast vs. West Coast. Affirmed vs. Alydar, 2.0. The aristocratic Phipps Stable homebred Easy Goer, a perfectly put together chestnut son of Alydar and the 1988 Champion Juvenile who was drawing comparisons to Secretariat, against the “ill-bred” shipper from California where they raced hard and fast but rarely held up at the classic distances. It was the western cowboy style of hard riding and harder living of jockey Pat Valenzuela against the steady, careful and devout living Pat Day.

The 1989 Kentucky Derby was supposed to be Easy Goer’s coronation, but no one told Sunday Silence.

As the gates opened it soon became clear: this wasn’t so much a horse race as it was a duel.

The first Saturday in May belonged to Sunday Silence. Just as he’d done as a weanling when he battled the virus, and as a two-year-old who escaped certain death in the back of an overturned horse van, the colt no one wanted would not be denied.

By now, Sunday Silence had the world’s attention. Still, his doubters did not back down.

It was a fluke. The muddy track gave the speedier Sunday Silence the advantage over the classier Easy Goer. The tables would be turned at the Preakness.

To this day, the 1989 Preakness duel between Sunday Silence and Easy Goer is the greatest stretch duel in racing history. Nose to nose, eye to eye, stride for stride the whole way home. Even as they crossed the finish line seemingly in synchronicity, the ferocious black streak with the big white blaze and the towering chestnut, you just knew Sunday Silence got his nose across first. He was a winner, after all.

Easy Goer would show his brilliance by spoiling a Sunday Silence Triple Crown at his home track in the Belmont Stakes. Still, it did little to devalue the ability of Sunday Silence, but rather validated the once-in-a-generation talent both colts possessed.

There was one more showdown to be had, later that fall in the Breeders’ Cup Classic. Again, Sunday Silence hushed his doubters and bettered Easy Goer by a neck. It was a cherry on top of an historically great season in which Sunday Silence won 7 of 9 starts, earned over $4.5 million and was named the 1989 Horse of the Year.

Sunday Silence returned to the track for a brief curtain call in 1990, but a ligament injury in his leg forced an early retirement. In 14 career starts, he’d never finished worse than 2nd.

Even in retirement he was doubted. His track record unquestioned, American breeders remained skeptical of his ability to produce sound, sane offspring. But Sunday Silence was an international star, and so it was, Japan’s Shadai Stallion Station soon came calling with an offer no one could ignore. And just like that, Sunday Silence was off to the island of Hokkaido. Over the next decade, he became the foundation upon which Japan built its footprint in the international racing industry. A true sire of sires, he fathered the likes of Deep Impact, Hat Trick, Zenno Rob Roy, and Dance in the Dark, ensuring his legacy for many years to come.

In the summer of 2002, Sunday Silence was diagnosed with laminitis. For months he fought valiantly but despite around the clock care from top veterinarians the infection spread from his leg and into his heart. This was a battle even the great Sunday Silence could not win.

A fighter ’til the end.