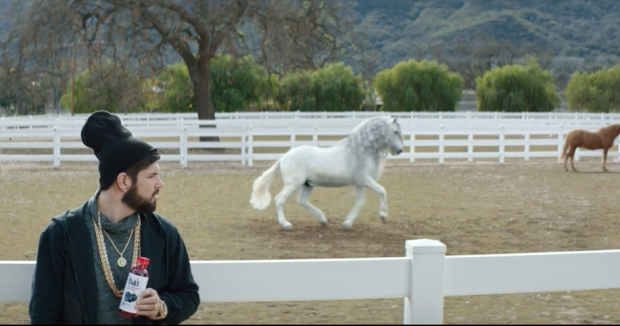 For thousands of years, humans have been using horses to sell products during the Super Bowl. Why not? It works. You think The King of Beers was just born into the throne? Of course not. It got there on the backs of its Clydesdales, who much to our collective disappointment, were relegated to benchwarmer status for this year’s big game.

Your loss, Beer King, because another beverage maker, Bai, ponied up the $5million fee and doubled-down on success. This ad ran during the game in just a few select markets, so many of you likely missed it, which is good or bad, depending on your artistic tastes.

If you’re confused by what you’ve just watched, you’re not alone. In fact, that’s the whole idea. The tagline behind the drink is that it doesn’t make sense for something to be so delicious yet healthy, and thus, we have this Ali G/Slim Shady hybrid character in the role of Horse Whisperer extraordinaire.

The ad sparked a flood of opinion on social media of course, because it’s a thing, and it’s online. Opinion! Offended! Outrage!

that bai commercial needs to take a seat tho

A horse ad! (For bai). Makes no sense, like most of tonight's ads. But–horses! Two thumbs up!

Admit it, the Bai commercial was kind of funny.

Serious what was up with that racist Bai commercial, @TheKmacOfficial?

I don’t really have an opinion other than I believe this was a commercial, and I have never tried a Bai, and I went to high school with like 10 of those dudes and that’s a really pretty Andalusian with some sweet moves.