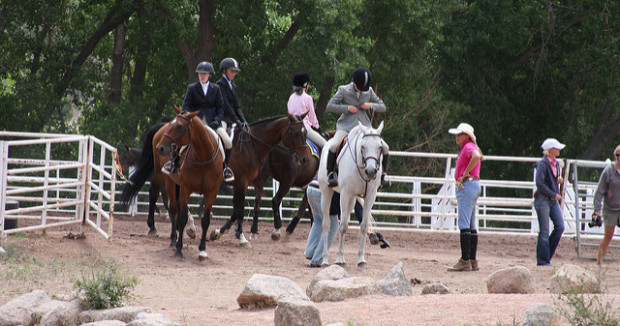 No one ever said the schooling ring wasn’t terrifying. There are no training wheels for this arena, where the fast-riding pros have just one thing in mind—prepping their horses for the next day—and little time to waste on the amateur, trying to curl herself into the fetal position across her saddle in the corner. Maybe Nelly’s horse is green. Maybe she’s never been to a horse show before. Or maybe it’s just some first-day jitters. Whatever the case, you know that Nelly’s fear, like a bad case of Mono in college, is quickly infecting her normally quiet horse, and things are beginning to escalate rapidly.

The verdict? Give her some space, and maybe a reassuring smile. Call it your good deed for the day.

Do you know Paul? Because everyone else does, and he’s about to remind you of it. Paul’s a fine professional who’s well known around these parts for his easygoing program and gregarious personality. And he feels right at home on the horse show circuit. Like “MOM—THE MEATLOAF!” at home. Paul’s young horses are sought after for their bombproof dispositions, since you know they’re well accustomed to shouting, inattention, and handling most of the navigation while Paul rides around the rail, back-clapping, shaking hands, and generally making off like the mayor of the schooling ring.

The verdict? Paul’s harmless, but consider bringing some ear plugs along to the ring for you AND your horse.

Jenny embraces deep breathing, yoga, and clean living, and the horse show schooling ring is her ultimate test. That scary-ish coop in the corner that you’re trying to jump? She’ll be parked in front of it for the next 10 minutes, patting her horse and practicing her Ujjayi breathing. Jenny doesn’t so much ride in the school ring as she inhabits it. For Jenny, riding begins in the mind, and this process can sometimes take a lonnnng time to accomplish. Because you can’t rush inner peace.

The verdict? Jenny is in her own head and isn’t likely to bother you. If she’s in the way, just ask her nicely to move.

Sometimes the Schooling Ring Ghosts just get to you. And today, they’re getting to Matt. Maybe it’s his trainer, screaming at him in the corner to sit up. Maybe it’s that stride he just left out in the line for the second time, or his horse, who’s clearly feeling his wild oats. Maybe it’s that Matt forgot his coffee this morning, or that Venus is in Retrograde, or that the Bills haven’t made it to the playoffs in 16 years, and that fact is just catching up to Matt now. Whatever the case, Matt’s having a moment, and things are looking to get a lot worse before they get better.

The verdict? The closer you get to Matt, the better your chances of getting run into, kicked, or verbally assaulted for no reason. Let Matt do Matt—you can do you at the other end of the ring.

5. Rachel, the Rebel Without a Cause

Plenty of people stress about what they’ll wear to the horse show. They agonize that their breeches aren’t fancy enough, or that their shirt is wrinkled, or their horse’s mane is lying on the wrong side of the neck—but not Rachel. Rachel’s permanent schooling ring uniform is a black T-shirt, but she never checks the temperature. Her horse’s mane stands on end and he could probably use a body clip, but she just thinks he looks a bit “Rock and Roll”. As a rule, Rachel loves most things to be at least a little Rock and Roll, and everything she owns is either black or covered in sequins. Because if you’re blending in, you deserve to come in last: winners are born to stand out.

The verdict? Rachel’s fine, and rides well, if not a bit unconventionally. Just take care not to stare too long at her blinged-out browband when you pass. It might blind you.

Nobody rides better than Karen, but she’d be the last person to toot her own horn. She shows up early, schools her eight horses, teaches her students, and keeps her aisle immaculately. You could get a riding lesson just by watching her, but she’s enough of a pro to keep an eye out for the amateurs as she’s jumping around the schooling ring—though she never misses her distance. Nothing is loud. Nothing is rushed. Because Karen knows the ultimate schooling secret: you get a lot more from a horse by doing less whenever possible.

The verdict? Watch and learn from Karen. She may not be the flashiest rider in the schooling ring, but she gets the job done every time with finesse.