How I Got the Shot: 5 Questions for Bill Gore, Endurance Photographer

Home > Blog > Life > How I Got the Shot: 5 Questions for Bill Gore, Endurance Photographer 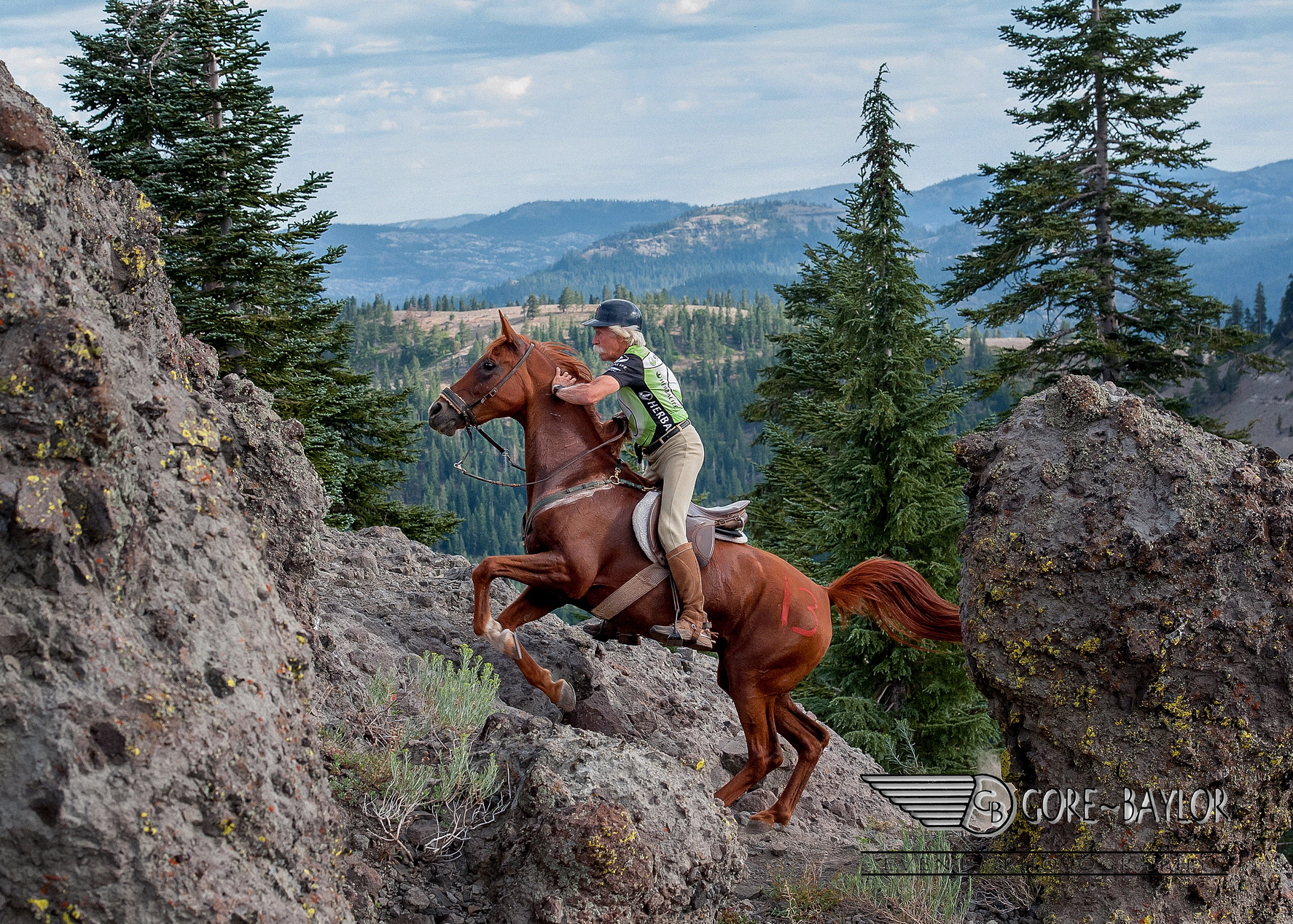 If you’re a fan of endurance riding, then chances are you’ve seen this breathtaking photo of the 2015 Tevis Cup winner, 72-year-old Potato Richardson (who has won the Auburn, California event three times) and his Arabian mare, SMR Filouette. But the story behind how the photo was captured is equally fascinating.

Photographer Bill Gore has been shooting endurance rides for 18 years, and took over the photography for the Tevis Cup’s famous, Cougar Rock outcropping back in 2011. What’s it really like to photograph one of endurance riding’s most challenging hazards? We caught up with Gore to find out. 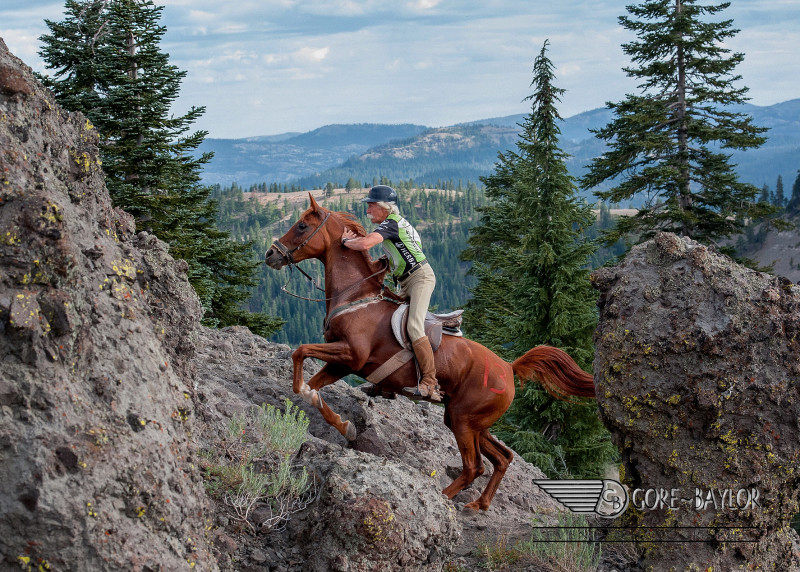 1. How did you get started in endurance photography?

The first endurance ride I shot was in 1997. Up until that point I had never heard of the Tevis Cup, even though I had grown up within 30 miles of Auburn. After hearing about this famous 100-Mile One Day Ride, I was intrigued with the idea of taking photographs of my friend [who was competing]. I contacted the Western States Trails Foundation and asked, particularly about Cougar Rock, as I had heard that it was the iconic “shot” from the ride.

I was put in touch with Charlie Barieau, who had been shooting Tevis since the beginning, and I explained my interest in shooting during the ride. Charlie offered to show me where some of the [prime photography] locations were, and we loaded up into my 4×4 pickup and away we went. I had the pleasure and honor to bounce around the mountains for about nine hours that day with Charlie. I didn’t realize the treasure of information that he shared with me. It wasn’t until years later that I realized what an intricate role in early endurance that Charlie had—plus, he truly was a “class act”. A few years later, I learned Charlie was living at an assisted living facility, so I contacted him again to see if he wanted to go with me to look for a spot for me to shoot at that year’s Tevis Cup. I already knew where I was going to shoot, but I couldn’t help myself with the opportunity to bounce around the mountain and hear all of Charlie’s stories.

A lot of the rides are about 1-2 hours, one way, from my home with the longest being about 7 hours. I usually have a good idea where I will shoot, which is a good thing due to our work model. I shoot with a partner, Rene Baylor, and we try to set up to photograph somewhere between 8-12 miles of the start. In a perfect world, this will put us shooting in an open area with the perfect lighting.

We need to shoot early because after we are done, we drive into the nearest town—sometimes just minutes away and sometimes hours away. We get to the nearest 1-hour photo and download our files to be printed and say a little prayer that the 1-hour photo lab doesn’t quit working. Then it is off to breakfast to wait until our photos are printed. If Murphy [of Murphy’s Law] has left us alone that morning and things run smoothly, we can be on the road back to ridecamp with, say, 1,000-plus photos in under 2 hours, but Murphy very seldom leaves us alone. All too frequently there will be an issue somewhere along the way that will set us back. We have had flat tires, vehicle breakdowns, [we’ve been] locked behind gates, having to wait for escorts through property.

“I stand with my left foot on one rock, and my right foot on another, and I can look down about 20 feet to the rocks below. I have had horses ride right up to me, where I put my hand onto the horse’s shoulder while the rider and I had a calm conversation as to the best way to proceed from that point.”

Hughes Photography had been shooting Cougar Rock for 31 years, but in 2010, one of their photographers [was] seriously hurt while shooting at that particular spot. Cougar Rock is a challenge, not only [due to] the difficulty of getting there, but the close proximity to the edge of the rock where the photographers shoot from. There is also about a 2-mile hike from where we camp to Cougar. It takes two photographers. The photographer that shoots from the rider’s left side is located within a couple feet of a drop-off of about 30 feet. I shoot the rider’s right side, and I stand with my left foot on one rock, and my right foot on another, and I can look down about 20 feet to the rocks below. I have had horses ride right up to me, where I put my hand onto the horse’s shoulder while the rider and I had a calm conversation as to the best way to proceed from that point. To say the least, Cougar Rock is an exciting place to shoot, and you frequently hear a rider start to cry tears of joy as they make it over.

Lisa Chadwick [a fellow photographer and Gore’s partner this year] shot the Cougar Rock photo of Potato. Probably the most important thing on Cougar Rock is timing, because you really only have one shot to get that iconic image.

4. What do you like about this kind of work?

The endurance community is like an extended family. Everyone looks out for each other and if someone is in need, there is always someone to help. I would say my favorite part about shooting endurance is the people—the riders, volunteers and ride management—they are a great group.  I display my photos for everyone to look at, and there have been numerous times when I had to leave my display area only to return and find money clipped where the photos had once been. Other times, while shooting, I will have a rider tell me as they are riding by that they owe me money from some previous ride.

“I think each and every Tevis attempt is worthy of a story.”

5. Do you ride yourself?

I have ridden endurance. My first ride was on a mule named Lulu. Lulu had a reputation for hurting people. I never had a problem with her. I knew who was in charge and man oh man was she fun to ride, especially on single track trails out in the desert. I rode Lulu on the first and last day of the Death Valley Encounter in 1999. My ride on December 31, 1999 was one I will never forget. [It was] Y2K, the end of the world, [and I] came across several preppers out in the desert just waiting for the end. What a party that day was. A lot of “Hot Damn” for me, and a lot of single track trail in the desert for Lulu, and it couldn’t have been a better day. And yes, I think the preppers were disappointed. A few years later, I bought a little mare that I liked to refer to as an “E Ride” at Disneyland—hard to predict what she was going to do, but a lot of fun.

In 2003, I decided to attempt Tevis on my mare. Up until I set my sights on Tevis, I couldn’t quite understand the hype of getting your horse to this famous ride. After setting my goal, I realized what all the hype was about, and you learn that Murphy is around every corner and under every rock, just waiting to mess with your Tevis [training]. I rode the ride in 2004 and finished. I think each and every Tevis attempt is worthy of a story, and I will just say, I spent most of the daylight hours looking for possible locations for photographing the ride.