I Got My Boy Back 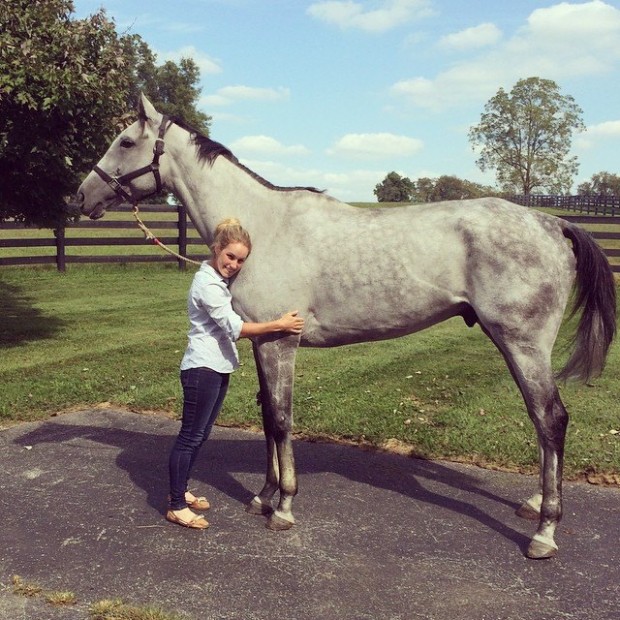 “He is now 8 years old and has career earnings of $430,000, but only $1,500 of that is from this year. He has only one win since the Excelsior in 2012, and yet, he will start on Saturday with a claiming tag of $12,000 at Parx for his 36th race…I have contacted numerous people in the pursuit of Larry, letting them know that he would have a forever home if and when he’s retired…I hope to one day have some closure for this story and that it does not end with tragedy or grief.”

–Carleigh Fedorka in “My Boy Larry”

The month of September is always the longest of the year – it is the Keeneland September Yearling Sale – 4000+ horses and 3 weeks of 4am mornings. Needless to say, last Saturday I was dragging just a little bit when my phone rang while standing in a fillies stall babysitting her as she threw herself against the wall. I pulled my phone out of my pocket and saw an 859 number that I did not recognize – but knowing it was a Kentucky number I answered wearily – awaiting for it to be a reminder to pay my cable bill or insurance for my truck, but instead I heard the four sweetest words to ever reach my ears:

“The horse is yours.”

Literally feeling like I was walking through a haze, I asked quietly “what?”

I was shocked into speechlessness, and just motionless as I continued to hear him ramble on.

“That horse, Marilyn’s Guy, he came out of that last race a bit sore and the owners said you can have him. For free.”

My heart began to race and my palms began to sweat. This was the call I had been waiting for for almost 6 years. Larry was coming home. I asked Will-B to hold on for a moment and quickly called Larry’s breeder, Drew Nardiello, and told him the news. His reply was short and sweet:

“Tell Will-B to put him on the next Brook Ledge van and bill it to the farm.”

I told Will-B the news while Drew cleared it with Brook Ledge, nearly shaking with excitement and just bursting with the news – I had to tell someone – so I called first my mom, and then conferenced in my best girlfriends. All three of them nearly in tears, knowing just how much this means to me.

Marilyn’s Guy, or affectionately known as Larry, arrived at Chesapeake Farm this morning. His nylon halter was removed, his shoes were pulled, and he was tossed six flakes of hay in the same stall he was located in when I met him in 2009. I raced to the farm the minute my classes were over and threw myself around his neck with tears in my eyes. We had our emotional reunion, spent with snuggling and grazing, hugs and kisses. Tomorrow he will get to be turned out for the first time in who knows how long, and for the next few months, and even years, he will get to JUST BE. 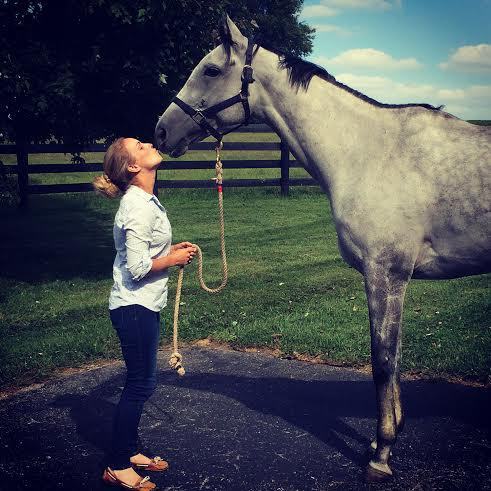 At the age of 8, “Larry” has run 42 times and won almost $450,000, a true War Horse if there ever was one. I hope to throw a leg over him in a few months and hack him around the farm that he will live the rest of his days on – and if he can fit into my trailer (doubtful), I hope to maybe even take him to hack off of the property one day and pop over a fence or too – but that it not what is important, what is important is that he is HOME, and he is SAFE. There are so many people I need to thank for this journey to end with a smile instead of suffering and tears.

To Drew Nardiello, the owner of Chesapeake Farm and the breeder of Marilyn’s Guy – thank you for being one of the “good guys” who follows his horses and ensures they end up in a good home. Drew has been with me on every step of this journey, contacting every owner and trainer right alongside of me. He paid for Larry to ship home from Delaware, and he is also who Larry will live out his days with on a gorgeous farm full of lush grass and amazing care, and for that I am forever grateful.

To amazing friends in the industry like Garth Waterfield who responded to my plea to find someone located at Delaware where Larry was exercising, who immediately responded that one of his best friends was training out of Delaware and gave me his number without hesitation.

To nearly strangers like Will-B VanMeter, who Garth recommended I call in hopes of reaching Larry’s trainer. I had only met Will-B once or twice, and yet he took on this endeavor of securing aftercare for Larry like he was his own horse. He played liaison between myself and the trainer for WEEKS, answering my pestering texts and phone calls. He also mediated the entire end of the story – getting Larry secured on a van safely and shipped home. Will-B did this for his love of these horses, and I can assure you, if I ever own my own racehorse – they will be placed in his care. Anyone with that much heart and enthusiasm for these animals deserves the credit he is due.

And finally, to all of my friends, family, and strangers who reached out after the first blog was posted and offered their time, money, trailers, and shoulders to cry on, in the hopes to get Larry home – THANK YOU. I had offers of THOUSANDS of dollars to be given to me to claim him, and I can’t even begin to tell you how much that means to me! I hope that you take that money and donate it to other horses who are in need of aftercare, as Larry’s safety is ensured!

I had prayed that the day would come where I could give an uplifting update on this horse, but had feared for the past few years that that day would never come – or even worse, that it would be a story of grief and anger. But Larry is home, in my arms, where I can see him whenever I want, and loved. And for that, my faith in this industry is restored.