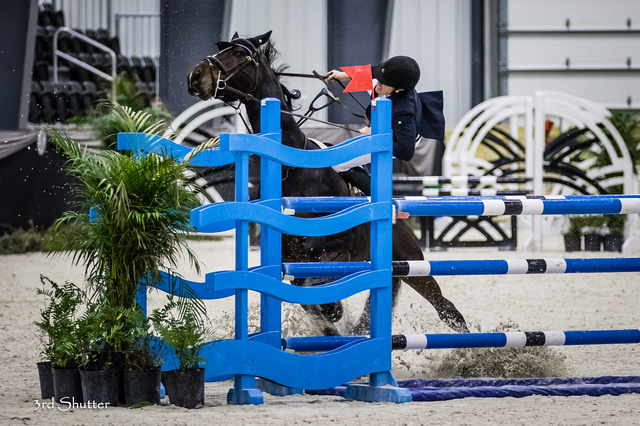 For better or worse, it had been a while since I’d fallen off a horse.

But having taken a tumble mid-lesson a few weeks ago—and setting off my airbag vest for the very first time—I stood up from the sandy ground and found myself in a strange, new world.

Let me tell you something about falling off then as compared to now. Things have changed.

Maybe it’s the fact that I’m the mom of two young kids. Or that the pallor of future osteoporosis is somehow visible in my semi-permanent, middle-age-pushing, under-eye circles. Whatever the reason, everyone seems way more concerned about me than they used to be.

Perhaps they’ve come to realize what I myself have been working hard to forget: I’m a full-fledged adult amateur. And I’m old(ish).

Things were not always this way. As a tween-aged kid riding way too-young, way too-green horses, I fell off all the time, and no one batted an eye. Quite the contrary, I think my trainer eventually became a little annoyed by the whole affair, and I can’t blame her. You can only say, “Keep your eyes up, keep your heels down,” so many times before someone decides to value their own life and take you seriously.

During my most recent fall, off a horse I was riding for the first time, I landed like a downy feather onto the arena footing (yes, thanks to my airbag vest, HUGE fan), missing all the poles on my way down.

But the concern on everyone’s faces when I did emerge, a little bashful on account of the two-bit yard sale I’d just made out of the long-run oxer, was something new altogether. If only I could have put my leg on a little harder, a little sooner, I thought instantly. If only I’d stayed more in the backseat.

But there was no help for it now.

My trainer looked utterly horrified. The poor horse I’d just come off, equally so. My trainer’s mother, who’d had both the vantage of the ringside pavilion and the apparent ability to fly on the wings of angels when she so chooses, was already in the ring, checking on me.

I’m pretty sure my own horse, who’d been watching from his window in the barn, was thoroughly mortified by the whole affair. Whether for my pride or his own as my regular partner in crash-dummying, I can’t be sure.

Were falls in the past this dramatic? It sure feels like they weren’t, especially given some of the hum-dingers I’ve been known to take.

One in more recent memory saw me tumbling off in the schooling ring in my best coat and dress whites into a fresh pile of manure, just minutes before my turn in the jumper classic. That particular dismount was, as you’d expect, a source of great amusement for my trainer, manager, and barn friends watching from the sidelines. (Yes, I did compete in the class. No, I didn’t have time to change. Feel free to use your imagination.)

Then as now, standing there, Mr. Kool-Aid-man-style, in my fully inflated body protection, there was no disguising what had just occurred. And no graceful way to talk about it, either. Which brings me to another point.

Why don’t we have a better lexicon for falling off horses? We all do it. Most of us, when it happens, would rather that it hadn’t. The only exceptions might be a semi-planned athletic dismount off a bonkers young horse, in which case you might say, “I bailed out,” which is only slightly more Maverick-sounding than “I jumped for my life.”

And of course, there are every longtime rider’s cabinet of war stories, which given a little time and perspective, eventually take on a life and vocabulary of their own…

“I spun through the air and landed on the split rail fence. The actual fence.”

“I took out the whole jump, wing standards and all. Oh, and I mention, I did it with my head?”

“I landed on my feet—the judges called it a perfect +5.”

But for your average, ho-hum, unplanned dismount, “I fell off today,” comes up a little short. Or at least, feels like we’re failing to tell the whole story.

Maybe that’s because, as ammie riders, falling off is usually an indication that somehow we’ve screwed up. Didn’t get the job done with our leg, for instance. Missed the distance. Pulled when we should have released. Essentially, we sh*t the bed.

Pro riders? Not even in the same league.

For one thing, it’s rarely their fault when things go south. For another, they just know how to cover it better.

Take Kent Farrington’s famously theatrical dismount just seconds after clearing the timers with Gazelle at Old Salem Farm at the 2016 American Gold Cup. Farrington landed on his feet—even bowed for good measure—and if that’s not a bit of badassery, I don’t know what is.

I’m not sure how Kent describes what happened on that day, but, “She got me in landing,” or “I crushed my Yuchenko double pike vault” would have been equally appropriate. Did I mention he won the class?

Ditto for that maniac Conor Swail, and however many luck-of-the-Irish lives he had to cash-in to stay in the tack on Vital Chance De La Rogue when the gelding bucked in the landing at CHI Geneva, causing Swail to lose his headstall before galloping around, bridle-less, like the GD Man from Snowy River. And he stayed on.

Seriously. The guy seems like he’d be equally at home running brumbies as he is winning five-stars, and maybe that’s just what it takes these days. I know one thing is for sure, though. I can’t do that.

And so, for the rest of us mere mortals—and vaguely geriatric ones at that—I suppose we should take our boring, injury-free falls when we can get them. Stand up, brush off the dirt, and give that shaky, embarrassed thumbs-up sign as we emerge, like caveman into the sun, from that once-upon-a-time oxer. We wave, chuckle awkwardly, apologizing to everyone within ear shot, but especially to our trainers, whose future life expectancy we’ve no doubt shortened by at least five to six months.

Because, yes, we may have just bitten the dust, gone for a dip in the liverpool, or taken a digger/ header/ spill. But let’s thank our lucky stars we’re still able to cowboy up, get back on, ride—and, yes perhaps fall—another day.

Even if we don’t have the words to describe it.

Feature image: Me, falling off horses in younger days. Absolutely no one cared at this point. (c) 3rd Shutter Photography