Etalon Is on His A-Game 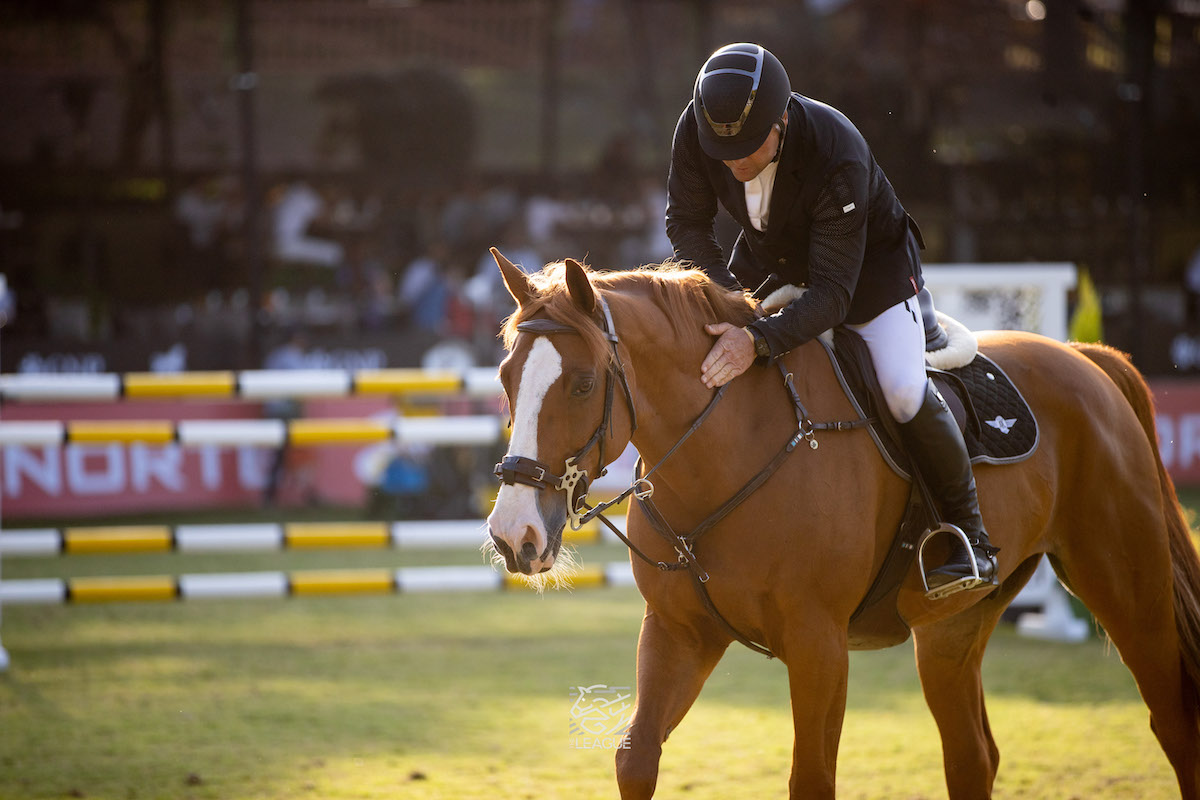 When Kyle King (USA) and Etalon galloped through the timers in the Vector Empresas CSI5* 1.50m Jump Off at Major League Show Jumping Monterrey II on Thursday, they were the only combination to leave all the poles up and stop the clock under the 40 second mark.

But you wouldn’t know it from the smattering of applause.

Just moments before, hometown hero Eugenio Garza (MEX) was leading the class, followed immediately by countryman Carlos Hank. When the Roadrunners’ rider bumped him from the top spot it was met with polite disappointment.

“It was funny. I think I took off the favorites of the horse show because I didn’t get many claps when I went through the timers,” joked King. “I wasn’t sure what happened. I looked up and it was pretty silent. Those two boys are hometown favorites.”

King, you could say, is a perennial favorite.

The win is his second with Etalon in as many weeks at Major League Show Jumping Monterrey, topping a 42-horse field in the Gregory Bodo (FRA) designed track. The 13-year-old gelding, like his rider, is never one to be underestimated in the jump off, even if King still sometimes does.

“Honestly, when I walked the course today, it was substantially harder than last week, I thought, for the first round. This horse, I always underestimate him. He was just fantastic.”

If King is sometimes surprised by Etalon’s winning nature, it’s due to historical prejudice, not lack of belief in the horse. Etalon was originally purchased as a three-foot amateur hunter for Christine Maclean but has a “hard jump” and was sent to a professional to train.

“Another good rider had him and came up to me with a broken collarbone and asked me if I would ride him. I was like, ‘That horse [pointing at his collarbone]?’ And he said, ‘He’s a really good horse. He just jumped me off.’

“He’s just been a great horse ever since,” said King. “I started in the 1.30m and then moved him up and, honestly, I would say right now he’s my ‘A’ horse on my team.”

Etalon’s Jumpr App stats support that contention. The personable chestnut has a 59% top 10 finish rate in 27 rounds at 1.50m. But while he’s a fighter in the ring for King, he is also at times in the bridle.

“I’ve learned with him that it’s better not to [adjust too much]. Let him do it. Just trust him,” continued King, agreeing that the horse “can jump hard, two parts a little bit sometimes, and hard.”

“He doesn’t like much help anyways. I pretty much grab mane when I leave the ground on him most the time. It’s just kind of his style. He loves to gallop. He’s best on the gallop and he’s come through and won some good classes for me, especially his last two seasons.”

The California-based rider credits a bridle change at the shows for helping them find the middle ground in their partnership.

“I went to [a hackamore] last year. He’s always had not the best mouth,” he said. “So, I stuck him in it and it really works. I only ride him in it when I show.”

King’s expectations for the former hunter prospect are only rising.

“He’s probably going to get tested on this season. He just grows. He’s one of those ones with his heart and his desire to be a good horse. He’s got the right miles now. So I think we’re going to keep trying. He’ll do some of the bigger three and four stars in Thermal [this winter].

“From this point on, he’s going to have to step up, I think, because he’s shown me he can do it.”