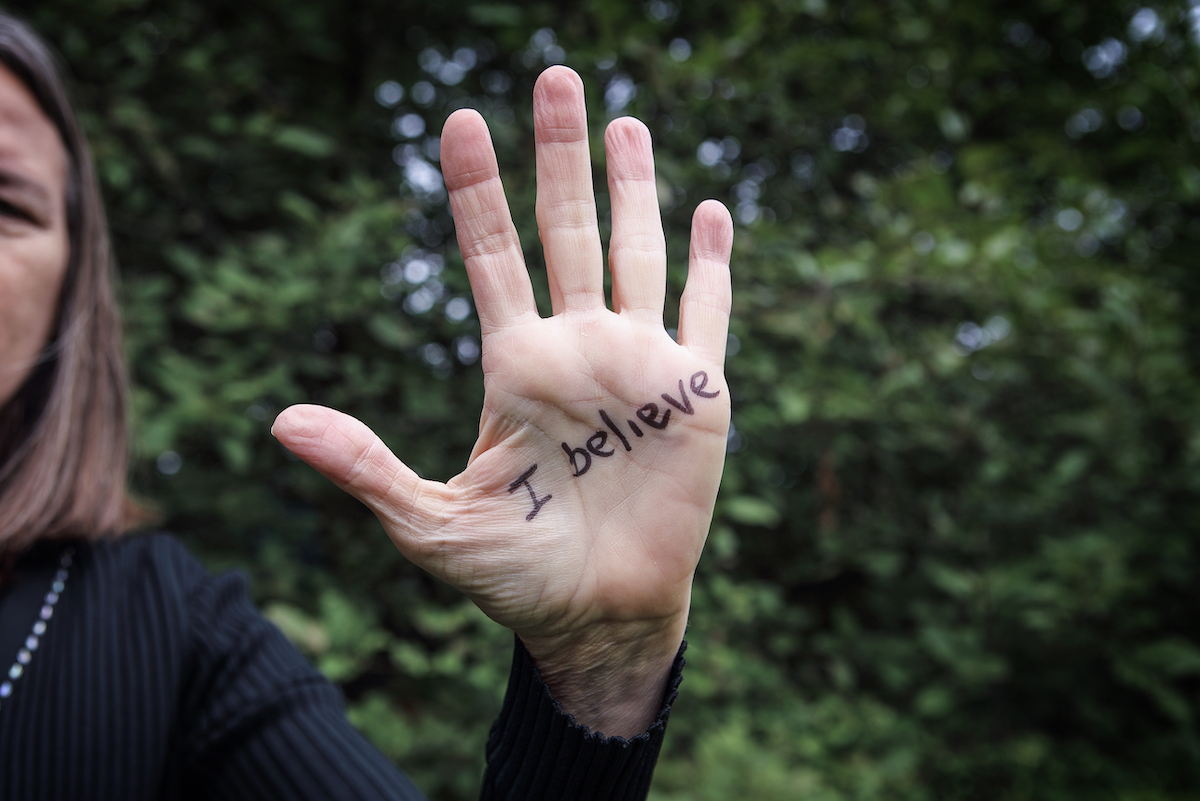 Human beings are hardwired to be bad lie detectors when it comes to strangers.

You may think, Pfft, not me. I’m excellent at spotting a liar. And you’d be wrong.

Even those trained in advanced lie detection techniques, such as police detectives, have just a 50% success rate in studies examining this specific skillset, reports New York Times bestselling author Malcolm Gladwell in Talking to Strangers (2019).

Gladwell argues that the reason we’re so bad at detecting lies in people we don’t know is that it’s human nature to default to truth. Simply put, when someone’s mannerisms align with their words, we’re biased to believe they are telling the truth.

This same bias may explain why we default to untruth when it comes to sexual misconduct.

When a victim, typically a woman, comes forward with an allegation of sexual assault, the common response to immediately question the claim. We scrutinize her words and behavior in an effort to determine if she’s being truthful and it is often the case that the victim appears to comes up short in that assessment.

She waited too long to make a report.

We project an idea of how a victim should speak and behave and when he or she fails to meet our expectations, we default to doubt.

Or worse. We default to disbelief.

And that’s problematic. Because empirically speaking, most survivors are telling the truth.

Studies and an increasing number of reports in the media indicate that sexual violence is alarmingly common in sports. According to stats collected by Childhelp, 40% to 50% of athletes have experienced anything from mild harassment to severe abuse. That’s roughly the same odds as flipping a coin for heads or tails or drawing a red card or a black card from a full 52 card deck.

In other words, it’s an entirely plausible outcome.

Despite the dismaying prevalence of sexual harm, few victims will ever make a report to authorities. According to RAINN, more than two out of three sexual assaults go unreported, while the SafeSport Survey found that 93% of individuals who experienced sexual harassment or unwanted sexual contact did not submit a formal report/complaint of it.

Of the minority that do make a report, only about a sixth will lead to an arrest and a mere fraction—less than three percent—will result in a conviction.

Those are excellent odds. For abusers.

If those statistics were not sobering enough, the overwhelming majority of reports to authorities are true.

Multiple studies show that false reports account for two to 10% of sexual assault claims, according to the National Sexual Violence Resource Center. That percentage is believed to be inflated due to non-standardized police terminology used to categorize a report as “false” or “unfounded” and shrinks further still when two or more victims come forward against the same individual. All of which is to say false claims are a problem, but the fear of one wildly outweighs the actual risk.

The take away here: sexual harm is common in sport (affecting up to 50% of athletes), most sexual assaults go unreported (66%) and the vast majority of reports (90 to 98%) are found credible.

In short: you have every reason, statistically speaking, to believe a survivor.

There’s another, perhaps even greater, reason to take survivors at their word. While only one third of victims will make a report to authorities, you can bet that the silent 66% are listening and watching how you respond to those reports. What you say, do and post can make or break their decision to expose a predator in your sport—and prevent future victims.

So, when someone discloses that they’ve been sexually assaulted, default to truth. Because in all probability it is the truth. And how you respond matters.

Learn more about what you can do to support survivors and prevent sexual misconduct in sport at weridetogether.today.