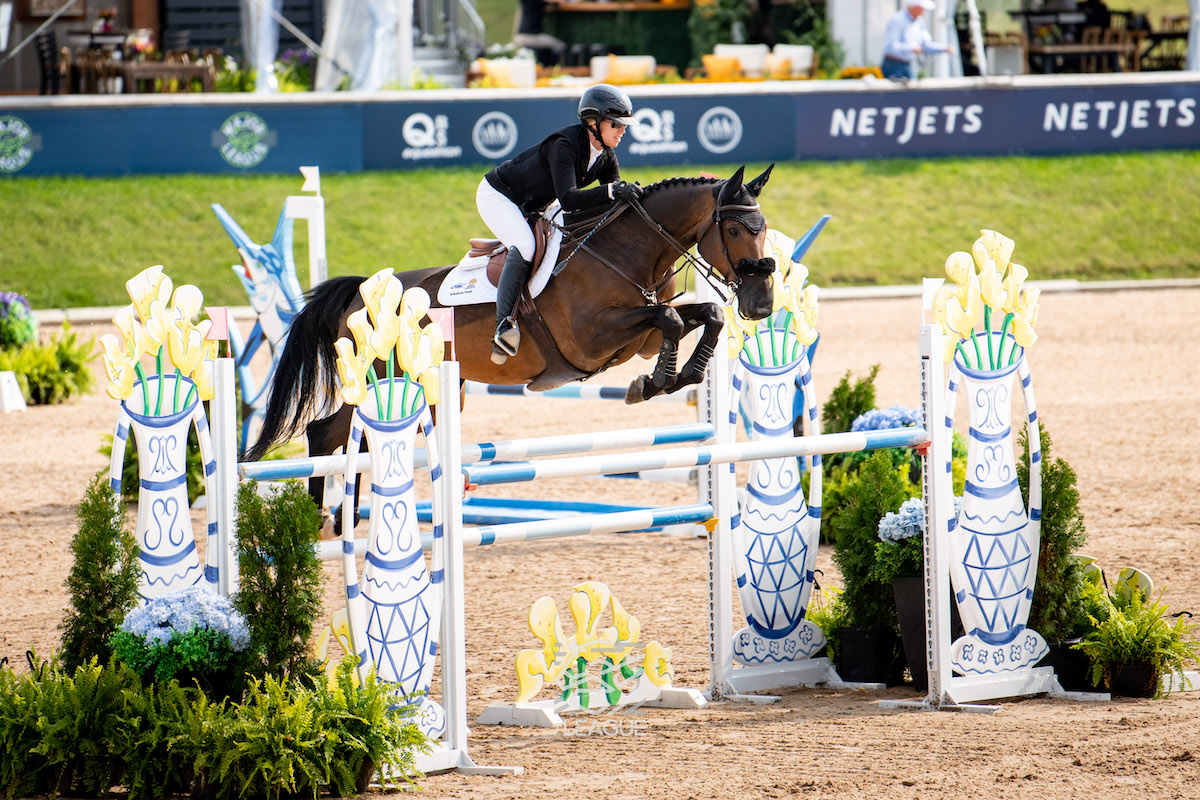 Albert Einstein once famously said, “When you stop learning, you start dying.”

After multiple decades at the highest level of show jumping sport, it’s a mantra that Eye Candy’s Amy Millar (CAN) is actively taking to heart.

Currently ranked just outside the top 100 in the world, the Canadian Olympian was recently part of the all-female Canadian “soldier” squad that finished 10th at the 2022 FEI Jumping World Championships in Herning, Denmark aboard Truman. She’d done her homework to get there.

“I spent a lot of time in Europe this summer, and a lot of time with [Olympic individual gold medalist and Canadian chef d’équipe] Eric Lamaze and my Canadian team. It was fantastic, and we practiced [a lot],” Millar says. “Eric showed me a couple different things with my position, and different strategies about how to get the horses to jump better.”

And who better than the notoriously speedy Lamaze to advise on the principles of carriage and aerodynamics in the ring?

“One of the biggest things he showed me is how to be lighter on my horse. My dad [10-time Olympian Ian Millar] is my main trainer, and he always talks about how the horses have to carry you. So we work very hard on making them go without much leg, which is really important,” Millar explains. “But I had gotten into the habit of using my seat instead of my leg, and so that was the big deal.

“[It was] stop using your seat, stop using your leg, and then you can really closely monitor the forward and back actions of the horse, and put their feet in the right place.”

It may sound like a minor adjustment, but it’s been paying off three-fold for Millar in competition.

Just this month, the Canadian rider rode anchor in the $600,000 BMO Nations Cup during the prestigious CSIO5* Spruce Meadows ‘Masters’ tournament in Calgary, Canada and earned the best result for their team. Millar and the 13-year-old Selle Français gelding Truman were one of only six double-clears in the competition, helping Canada to a fifth-place finish overall. She also took home two, top-ten CSI5* placings in 1.50m and 1.55m, respectively, with Truman at the MLSJ Ottawa and won the opening class and posted a double clear for team Eye Candy in MLSJ team event at MLSJ Toronto with Christiano in late August.

The trend is continuing too. On Thursday, she and Christiano added the first 5* class at MLSJ Traverse City to that list.

According to Millar, her time in Europe was key to filling in some subtle gaps in her game, especially when it came to adjusting to the different personalities on her string.

“Every horse is different. So, you might master riding a certain type of horse in a certain style, but maybe that style doesn’t work on a different type of horse. And then there’s the fact that the sport is also evolving and changing. You go to Europe, with those careful, careful jumps, and the width that they jump over there, and you just have to make little adaptations to your riding to be successful.

“There’s always new things to learn, you just have to [be willing to] make [those adjustments] to be successful,” Millar reflects. “That’s the thing that keeps people going in this sport for so long, is that there’s always room to improve.”

Catch all the action at MLSJ Traverse City live on MLSJ TV.