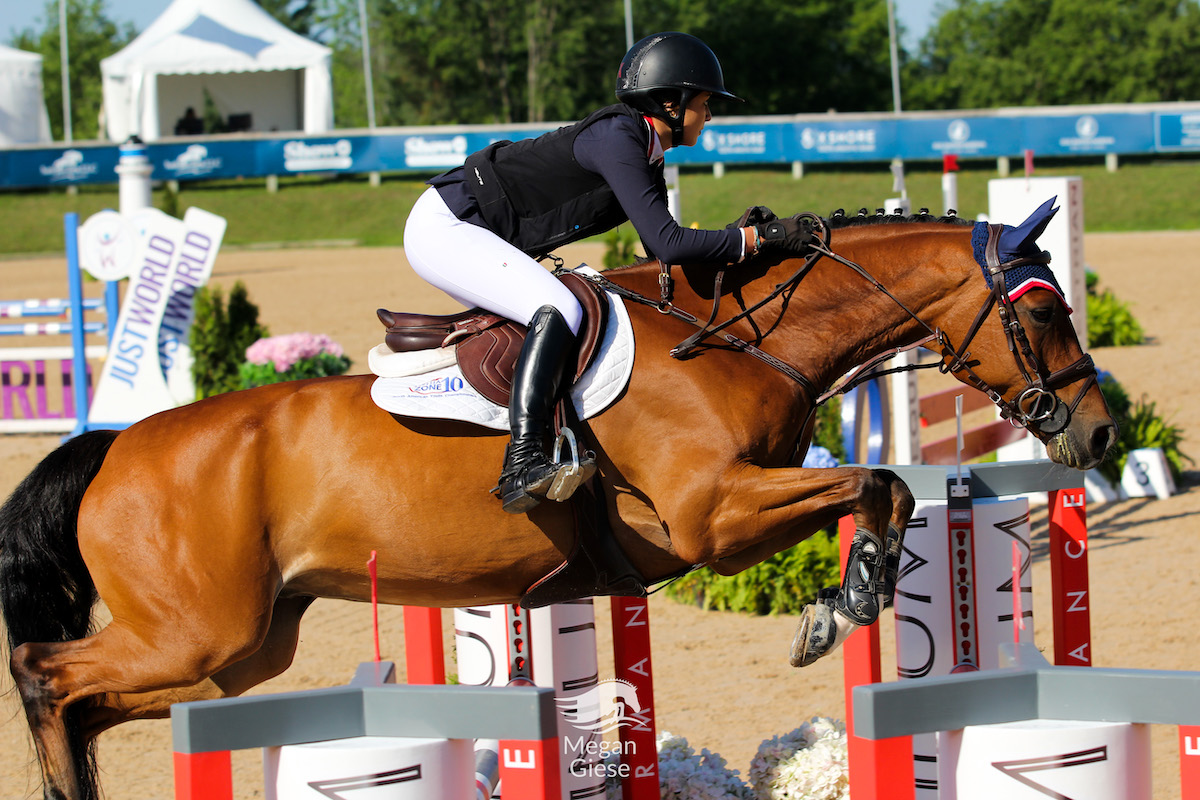 Knowing what to expect—and how to adapt—made all the difference for the Zone 10 rider.

“We walked the course, and then we watched the first girl go, [Zone 7’s] Campbell Brown. She was so fast, and I was like, Oh my God. That really changed my plan.

“I knew I had to get [going] from the get-go, and kind of get a good angle to the first fence. I gave [Quind] a few kicks before the first fence, and then I just kind of knew [we were on it] in that moment, because he’s so quick.”

Quind was quick—quick enough that the pair’s clear time of 56.70 seconds landed them squarely on top of a competitive Pre-Juniors leaderboard. “He has a really big stride [and] he really likes to just get on a good gallop and keep going,” Diab said of her mount of a year and a half. “This course really set him up well for that.”

Ironically, though, it wasn’t Quind’s big stride but his big personality that made him stand out when Liab went horse shopping a couple of years ago. “He’s just bubbly and [enjoyable] to be around. He’s one that you always want to have in your barn,” Liab explained. “[Quind is] a love bug. He’s kind of nosey but that’s what makes him great.

“He really tries his heart out, he’s honest, and he always wants to help you get to the other side.”

After watching Brown’s round, Liab knew she could use Quind’s competitive nature and athleticism to her advantage on course, riding one less stride in more than one line than she had originally intended. “[Even then], the lines felt too short half the time!” she said.

Adapting one’s plan in a key moment is the kind of confident show jumping call that only comes with experience. For Liab, that experience was earned, in part, thanks to her 2021 Team Gold medal-winning finish with the Zone 8/9/10 Children’s squad.

The biggest difference this year? A growing comfort with the unique team aspect of NAYC competition.

“The ‘team’ part is what’s most nerve-wracking, because you don’t want to let down your teammates, especially because you’ve all worked so hard to get here,” she said. “Having that [NAYC] experience last year and [doing] the [FEI Jumping Nations Cup Youth] earlier this year helped me, because you learn that we’re all going through the same thing. Going out there with the right state of mind is the best thing for your team, rather than stressing about going clean, or being fast.”

It’s an approach Liab plans to use again when she and Quind return to the ring on Thursday in the NAYC Pre-Junior Team Final. “When I focus on it being a big championship, that’s kind of what makes me the most nervous, and makes me ride differently than what my horse is used to—and [also] what makes us a good match.

“I think just having [us] feel like we’re all here, doing the same thing that we always do, [is a] mindset that helps center me in the ring.”