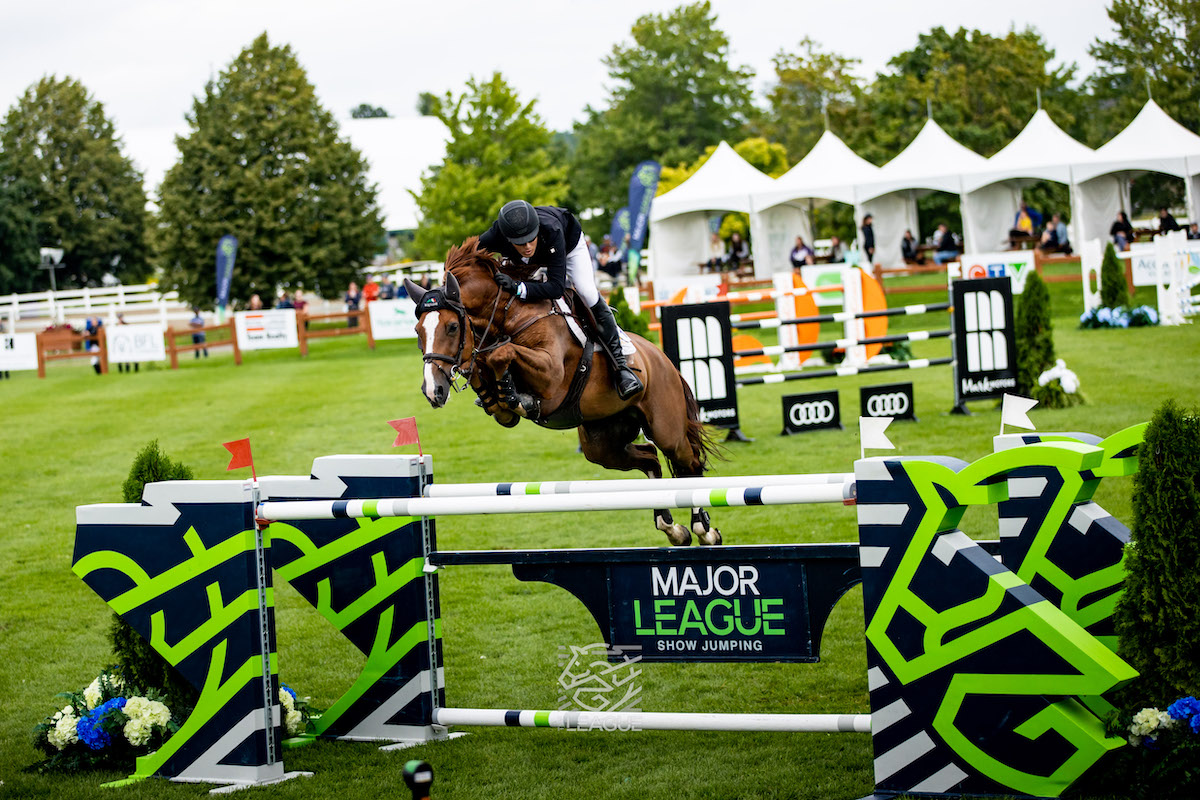 Quinn 33 has made a few trips around the block.

At 12, the German warmblood has had 12 different riders over the course of his international career—and jumped 1.45m or higher with ten of them.

Spy Coast Spies Tanner Korotkin is the latest in that roster. But in just three weeks of showing, they’re already among the most successful. In four international classes the pair has earned two 5* wins.

Friday at Major League Show Jumping (MLSJ) Ottawa, hosted by Wesley Clover Parks, was the setting of their most recent win. Koroktin and Quinn 33 topped a 12-horse jump off in the Saniton Plastics 1.50m CSI5*—and with minimal effort.

“For the jump off, I knew my horse is so insanely quick and all I had to do really was [let] go with my hands a little bit and just focus on being a bit tighter. And I knew we could do it,” said Korotkin.

That “little bit” of room to run translated into over a second faster through the finish timers ahead of Roadrunners’ speed specialist Kristen Vanderveen (37.6 vs 38.86 seconds).

“To be honest, I didn’t know Kristen was in the lead. She’s a very, very fast rider. And so I just had my plan let go of my hands and let Quinn do his job and he knew exactly what to do,” he continued.

Owned by Rupert Winkelman, Quinn may be new to Korotkin’s string but the partnership has been quick to form.

“I love this type of horse and I love the way he goes. We’ve clicked very quickly, it feels like it anyway,” shared Korotkin.

“He’s definitely a bit of a quirky horse, but loves to jump, has lots of blood, lots of character, loves his job [and] has probably has the biggest heart of most horses I’ve ridden. And, he wants to win.

“You get on and he’s always ready to go. He’s bouncing up and down, ready to go, ready to jump. Just a lot of energy and adrenaline going. To be honest, that’s his strength—his quirkiness and his blood.”

“I can get spaced out pretty easily and, you know, get caught up and excited to go into the jump off and excited to try to win and stuff like that, as any young rider does,” said Korotkin when asked what his trainers, Shane Sweetnam and Chris Pratt, advised him going to the ring.

“They told tell me to remember what we walked.”

Catch all the action from MLSJ Ottawa live on MLSJ TV.