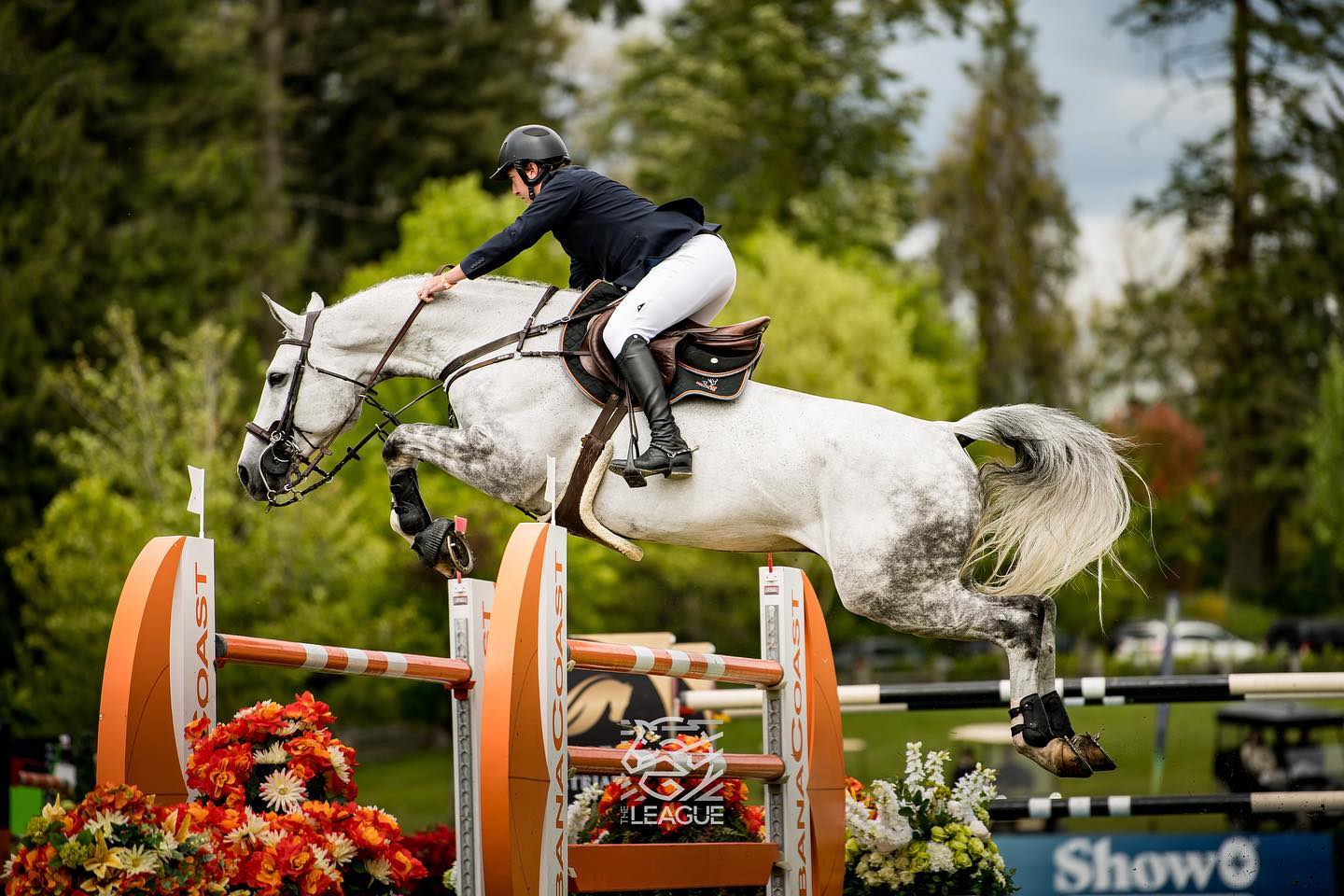 On Sunday, Coyle and the 11-year-old stallion kept with their Major League luck and took another, albeit planned, victory lap around the Fort Grand Prix ring at Thunderbird Show Park in Langley, BC.

Stage 1 of the 10-stop tour saw the Spy Coast Spies rider top the MLSJ CSI5* Grand Prix 1.55m, a class that presented the most competitive field of the MLSJ tour yet with many seasoned veterans qualifying for the 10-horse jump off. He and Ariso crossed the timers in 45.89 seconds, ahead of Nayel Nassar (EGY) and his Tokyo Games mount, Igor Van De Wittemoere (46.56).

“Nayel on that horse is very, very fast. We had Kent [Farrington], one of the best in the world, in my opinion, at everything,” said Coyle.

And what of his brother, team Eye Candy’s Daniel Coyle (IRL), who finished just tenths of a second behind Nassar in 46.81 with the 12-year-old mare Legacy?

“Uh, and Daniel [Coyle], I suppose you could say he’s not bad also.”

Jumping off against the likes of veteran combinations Beezie Madden with Breitling LS and Kent Farrington aboard Gazelle, it was Coyle’s elaborate strategical design that gave him the cutting-edge advantage. So what was it?

Okay, so maybe it’s true that there are some things better kept in simplicity. For Coyle, the reason is twofold; he believes a straightforward plan is what secures consistent results, and it better suits his learning style.

“I’m very dyslexic. If I count the strides, I get lost. So when I walk the courses, obviously I still walk all the strides, but it’s very simple for me. I think of the line as, ‘it’s normal,’ or ‘slow down’, or ‘go faster’. I think people get too technical with all the other things that happen in the middle sometimes,” said Coyle.

“So that’s what I do. I’m sure it wouldn’t work for everyone, but it must work for me.”

Coyle can attest that a win at the top level takes a melding of preparation and luck, having 5* distinction straying just out of reach for the larger part of his career. Before he jumped on the MLSJ tour, that is.

“People can say whatever they want about this, but when you’re going that speed, everything kind of has to come up for you. I was very lucky today, everything came up. In the warm up today in between the first round and the jump off, he was jumping over the standards,” explained Coyle.

Over the standards is the standard at this earliest point in the season, since the horses and riders are well rested after taking a break following the busy winter season. Daniel Coyle is already on a roll, he’s won several 2* classes this week with his newest nine-year-old mare Ivory TCS. Sunday morning, he came second in the Winning Round CSI5* 1.50m with Oak Grove’s Carlyle.

“We jumped a lot in Wellington. The horses have all had a little down time…I’m fresh. Horses are fresh. So that’s probably why we’re peaking this week,” said [Daniel] Coyle.

Nassar has also had repeat wins this week. He finished first yesterday with Igor in the Jump Off CSI5* 1.50m. Despite it being an ultra competitive class, he regarded it as a warm-up for today’s CSI5* Grand Prix, a thought which rang true.

“Igor’s just been unreal these past six months. We gave him a little break after Miami and then brought him up here. Jumping on grass, he seems to love that. A lot of his great results have been on grass,” said the Egyptian Olympian.

“We’ll be here [at tbird] next week. We just kind try to put him in places where we know he can thrive. He doesn’t owe us anything at this point, so anything he’ll gives us, we’ll just take.”

While the final class of Stage 1 in Vancouver is complete, there are still nine stops left to go on the MLSJ Tour. We’ll see which riders also seek to etch their names into the MLSJ history books.