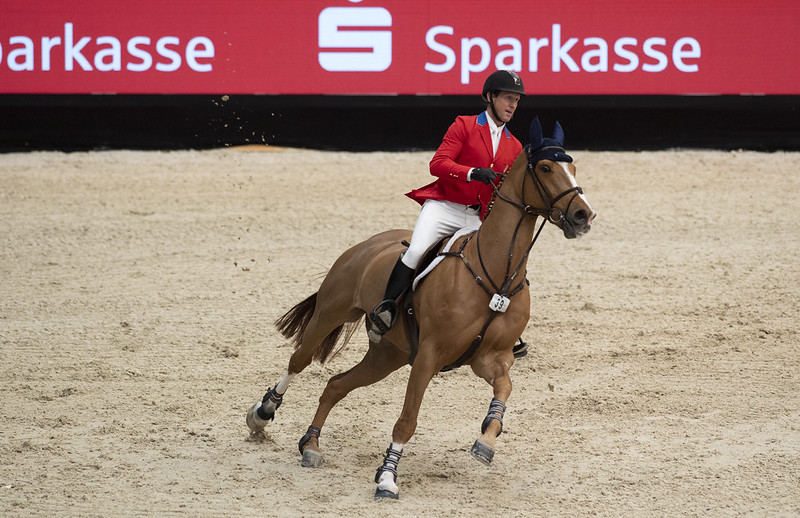 If you’re Mclain Ward, that is.

It’s day two of the FEI Jumping World Cup Finals, and yesterday’s standings got a good ol’ fashioned shake down.

Athletes tested the 1.55m jump-off class in reverse order of their first day finish, and while yesterday’s leaders struggled, Ward (USA) found his stride. Not allowing this one out of his grasp, Ward blazed through the timers at 44.03 seconds. It was over six seconds faster than runner-up Harry Charles (GBR). Even Ward was surprised of his time.

“It ended up being a little faster than I thought,” admitted Ward.

His winning ride puts him atop the leaderboard going into Sunday’s final round.

Owned by Beechwood Stables LLC, the 13-year-old gelding out of Contagio was Ward’s Tokyo 2020 Olympic team silver partner and has an impressive 61% career clear round rate at the 1.60m level, according to JUMPR App, landing in the top 10 62% of the time.

He’s jumping better than ever, too. At WEF the pair collected several top placings, including a win in the 4* Grand Prix 1.60m in February. For Ward, clinching the World Cup Finals a second time would be the cake to an already successful year.

Ward may be in the sweet spot going into the final day of jumping, but the party’s not over.

Harry Charles proved once again that you can’t discount youthful dauntlessness. The 23-year-old is the youngest on the roster, following Ward with a 47.14 second double clear with Romeo 88. Closely behind was Jack Whittaker (GBR), the nephew of show jumping powerhouse John Whittaker (GBR).

Yesterday’s leaders found challenges on the Frank Rothenberger (GER) designed course. Martin Fuchs (SUI), Max Kühner (AUT) and Conor Swail (IRL) all collected a fault in the first round and failed to advance to the jump-off.

Despite the dispiriting day, there is still hope for the Swiss yet. Fuchs, who rode The Sinner today, will be in the irons on Sunday with yesterday’s winner, Chaplin. He’s comfortably tied for third with Charles in the overall standings. Meanwhile the ever-consistent Harry Smolders (NED) has been sneaking up the standings, placing fourth on Friday to move into fourth overall with Monaco.

The Americans keep on fighting

Once again, it was a mixed challenge for the Americans. While it was Ward today who ensured the American National Anthem was echoing through the Leipziger Messe, the others are keeping the pressure on. Katie Dinan (USA) and 16-year-old Brego R’N B demonstrated a masterful round that put them in the top ten.

“I am super happy. I had one time fault, but my horse Brego jumped unbelievably, and I couldn’t be happier with him. It was really nice to show such a great performance today,” said Dinan on their eighth place finish.

The now five-time World Cup Finalist last appeared with Nougat du Vallet in 2016, who is happily enjoying his retirement. Her qualification with Brego came after her fourth place finish WEF Week 9 in the CSI5* Grand Prix.

Aaron Vale fell just outside of the rankings in 12th place, and Hunter Holloway, who had an impressive finish in the first leg, unfortunately lost a stirrup and collected rails along the end of her course.

The most important day, however, is still to come.