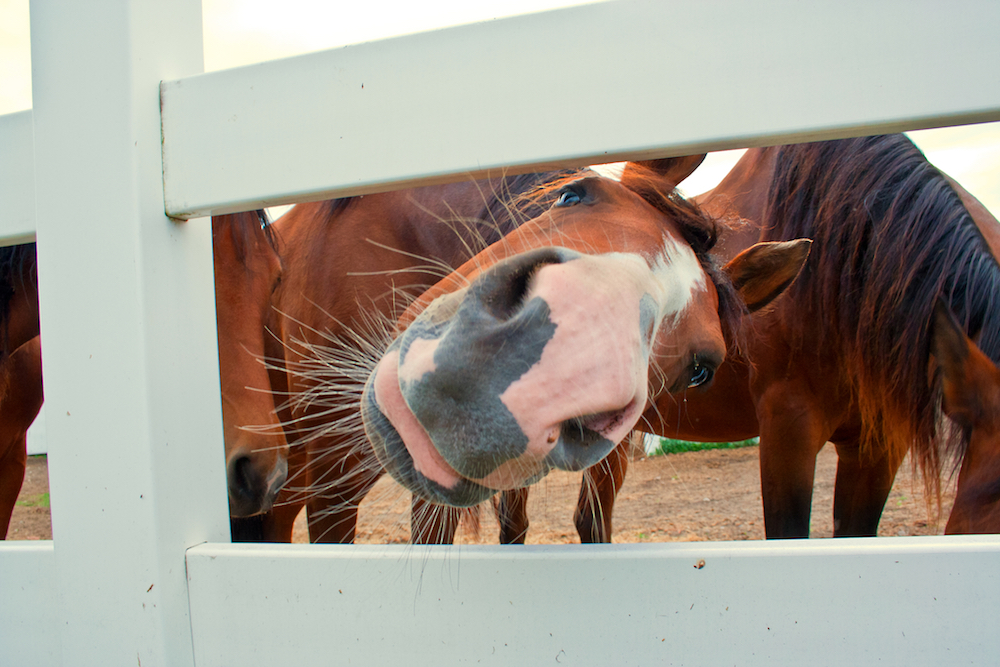 Question: “A couple friends and I were talking about all the horses we’ve trained and ridden throughout the years and comparing their characteristics and personality traits, etc. We were wondering if horses can develop mental illness similar to what humans exhibit. For example, one of my horses, many years ago, acted like he had a nervous breakdown. And my one friend described her mare as “acting autistic.” We both had raised these horses from birth and they had never been mistreated, and had normal acting sires and dams. Do horses experience mental illness? Have there been any studies? Or do you think all behavior problems stem from training?”

Answer: I guess that we’d first have to define terms. Otherwise stated, what does the term “mental illness” mean. In looking it up, I find this definition, in the online medical dictionary: “Any of various conditions characterized by impairment of an individual’s normal cognitive, emotional, or behavioral functioning, and caused by social, psychological, biochemical, genetic, or other factors, such as infection or head trauma. ”

As such, that seems to me to be a pretty broad definition. But the key phrase seems to be “impairment of an individual’s normal…functioning…” As such, in order to determine if a horse had mental illness, you’d have to know what’s normal for that individual. And there’s the rub.

One would presumably equate mental illness in a horse with abnormal behavior. And, the subject of horse behavior is one that has received a whole lot of study. There’s a lot that goes into horse behavior, but a lot of it comes down to two things: how horses normally behave, and how they were raised.

So, for example, in the wild, horses are prey animals, so they normally react quickly, and without thought, when confronted with things that seem threatening. While we may understand that a traffic cone or a flapping tree limb isn’t going to eat us, to a horse, it’s something strange, and something to be afraid of. You never know when that tree limb is being pushed around by a pack of wolves, I guess. And while it’d be pretty weird for a person to run off blindly if, say, they saw a piece of paper blowing across the street, that’s just the way that horses are.

The way that horses are raised definitely affects behavior. So, for example, it’s been shown that stalled weanlings spend significantly more time engaged in behaviors that are considered undesirable, such as licking or chewing the stall/shed wall, kicking at the stall/shed wall, pawing, and bouts of bucking and/or rearing.

And, of course, they may react quite aggressively to an unpleasant stimulus, remembering, for example, that something was unpleasant for them (like a horse trailer). While some people may not be able to understand why the horse wouldn’t want to climb in the trailer, and may think that it’s irrational, I personally have no idea why a horse would ever consider climbing into a dark, moving box.

Certain diseases definitely cause behavior changes, as suggested in the definition of mental illness. Diseases like encephalitis or rabies can cause depression or aggression.

I remember one horse that I treated that had a brain abscess—he would seem normal, then start running around blindly, and become very aggressive. (He had to ultimately be put to sleep). So I guess from that standpoint, you could say—at least on some level—that the horse was mentally ill.

From a physiology standpoint, horse brains are somewhat similar to human brains in both form and function, for example, most of the same chemical neurotransmitters work in both horses and humans. So there’s not any reason why horses couldn’t have mental illness.

But I think that the biggest problem with answering your questions is that there’s no objective way to tell if a horse might have mental illness. There aren’t any cognitive tests that might help differentiate between a horse with a behavioral problem and one that is certifiable. Even some of the questions that are typically asked people wouldn’t help much if you were screening a horse.

OWNER: “Doc, I’m concerned that my horse might be depressed.”

PSYCHOLOGIST, TO CLIENT:  “Hmmm.  Let’s see. Let me ask him a few questions.”

PSYCHOLOGIST, TO HORSE: “Do you feel like eating all the time? Do you feel fearful, but you can’t figure out why? Do you find it hard to focus?”

From my point of view, if the horse answered, “Yes” to any of those questions, it would mean that he was…well, a horse.

So, bottom line is that I think it’s possible, but I think that it would be really hard to tell. Some of your friends probably act crazy from time to time, too, but you accept them for who they are, or move on. I think that’s probably a good idea for most horses, too!