McLain Ward and Lee McKeever Are the Odd Couple 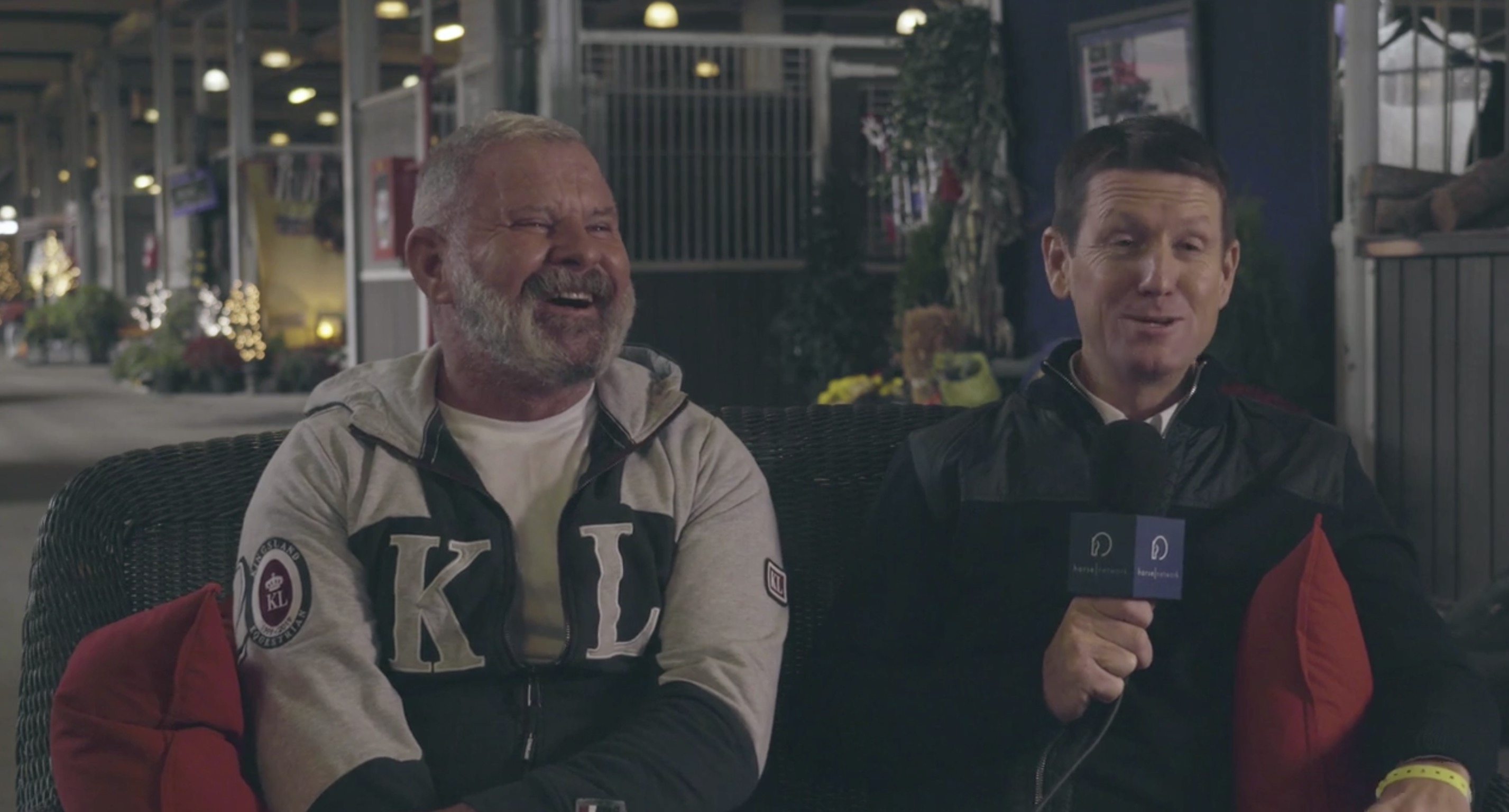 One has a penchant for trucker hats and hoodies. The other, a stickler for classic attire.

One is a man of few words; the other, of many. Verbose even.

One tends to hide from the spotlight. The other shines in it.

For 31 years, show jumper McLain Ward (USA) and his diametrical barn manager Lee McKeever have made a winning combination, collecting medals at the Olympic, World Equestrian and Pan American Games along with a World Cup and World #1 title or two. And they’ve only grown more unlike along the way.

We caught up with equestrian sport’s odd couple at the Royal Agricultural Winter Fair in Toronto, ON to talk about what makes their relationship work so well.

Horse Network: Lee, you left Dublin, Ireland in 1988. How did you end up in America?

Lee: I was coming for a year to work for [McLain’s] father.

HN: McLain, what was your first impression of Lee?

McLain: I had an older sibling at that time. But many, many years [older] so I didn’t really have a close growing up relationship with him. And, you know, it was an interesting time of my life. My parents were divorced and here was this young guy, also interested in horses. I think we naturally gravitated towards each other.

HN: As a teenager, McLain would sometimes sleep on the floor of your apartment. Was he cramping your style, Lee?

Lee: No, I was very quiet. I didn’t have much of a social life.

McLain: He’s since made up for that. [Laughs]

HN: You really grew up together. Would you describe it as a brotherly relationship?

McLain: I think it’s probably become much more than just a family relationship because that’s expected. This is something that didn’t have to happen and did. We’ve had, on a serious note, difficult times and struggles and found a way through it. It was maybe more meant to be.

HN: You’re very different personalities, opposites even in a lot of ways. Why do you think this partnership works so well together?

McLain: Yeah, we are very different personalities and funny enough as we’ve grown up, literally, those differences are clear. But that hasn’t made the bond any less close. I think we fill the other’s gaps. And that’s worked very well. Once in a while, it creates a little friction. And then he admits he’s wrong and it all works out.

HN: Lee, I believe you had your own way of dealing with that…

Lee: [Laughs], Yeah, sometimes, when McLain was being really difficult, I would spray his saddle with a bit of Showsheen. He really hates it when his leg moves, so…

Lee: I mean, I used to think about spraying his saddle. I never actually did. [Winks]

HN: What do you most admire or appreciate about the one another?

Lee: He’s very loyal. He’s very— he’s actually a very good person. Great heart. Some of the things you want to be in life, he is, you know what I mean?

McLain: I think from a purely professional point of view there’s nobody better at what it is that Lee does with the horses than him in the world. He’s obviously been recognized on the world stage as being the very best in the care and management of these top sport horses. [Lee won the FEI Best Groom Award in 2018].

On a personal level, both Lee and his wife Erica, who, you know, has worked with my family for the same amount of time, they hold you very accountable. You have a tendency in life, if you have some success, to as time goes on get surrounded with people who always see it from your point of view. That’s what they’re paid to do. And this relationship is very different.

It causes friction at times. But I think it’s, professionally, my greatest asset and probably also personally with our relationship. Full accountability. That’s been a great thing in my life. And he’s been a great friend. That probably supersedes everything else.

HN: It’s always fun to watch Lee at the back gate—he’s so invested in your round.

McLain: Half the time he can’t see what fence the horse had down! I’ll come out and say, “Oh, what do you think, did he have that behind?” “No, no. In front.” He can’t see! He’s back at the end of the ramp.

I mean, you know, even sometimes when we get frustrated with each other and little things in any relationship annoy you, but when I realise he’s that invested or I watch a jump off and I can hear him in the background—it’s a little embarrassing at first—and then, I’m really happy that someone, push come to shove, cares that much.

HN: On the subject of winning combinations, what made you decide to add Haygain to your program?

Lee: We just started using Haygain maybe three months ago. I find it a great asset in our routine especially when we’re travelling and the hay isn’t as good. Or with one that coughs a little bit. You know, with dust and the environment. The Haygain makes sure you are giving 100% to your horses, you find you are always feeding the best quality hay available.

McLain: For those who know, our set up works very well because if Lee says it’s good for the horse, then it’s good for the horse. We both fill our role. In reality, I don’t think there’s anybody who’s researching more or more on the cutting edge trying to figure every avenue to improve the horses condition and well being. And frankly, if he says this is a product that’s beneficial then it is and I believe in that 100%.

HN: You believe in, Lee.

McLain: Always. Always. I don’t always believe him. But I believe in him. [Laughs]