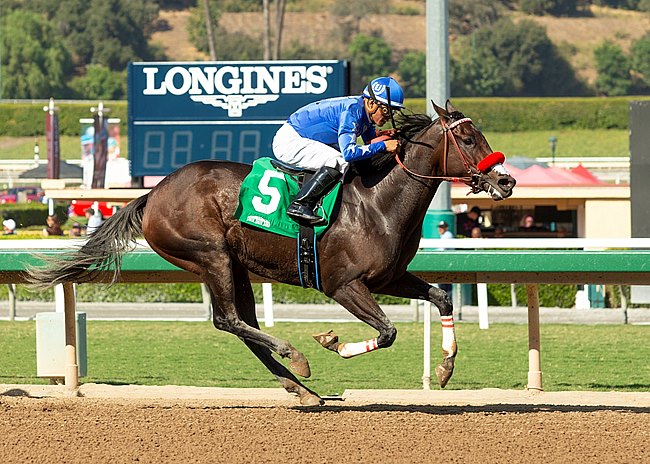 Princess Dorian, injured while running as an $8,000 claimer in the second race Sunday, Nov. 10 at Del Mar on the third day of its Autumn meet, was humanely euthanized Monday at San Luis Rey Downs according to the Del Mar Thoroughbred Club.

The decision to put her down was made by co-owner Erik Johnson in consultation with co-owner and trainer Andrew Lerner and San Luis Rey Equine Hospital personnel after Princess Dorian developed severe laminitis in both hind legs despite apparently successful surgery to repair her severe left front leg injury.

Johnson is a defenseman for the Colorado Avalanche of the National Hockey League who races as ERJ Racing, Lerner a Del Mar-based trainer/owner.

On Wednesday, Lerner posted a photo on Twitter of Princess Dorian walking and wrote, “Post op report is positive so far and we are super grateful to all doctors and everyone for their love and support!”

However, as often happens in cases of severe leg injury, Princess Dorian’s condition deteriorated over the ensuing week.

“She developed severe acute hind limb bilateral laminitis and the humane thing to do was euthanize her. My heart breaks for her and for everyone who loved her. I commend the on-site vets at Del Mar, the team at the San Luis Rey Equine Hospital and trainer Andrew Lerner for their terrific care of her. If there was anything more to be done for her I would have done it. I loved Princess Dorian and will miss her greatly.”

Lerner told DRF: “She became very uncomfortable. It happened so quickly. It took everyone by surprise, owing to the way she had been doing.”

After her surgery, the five-year-old daughter of Idiot Proof  (out of Disliteliteomine by Singletary) was eating normally, mobile and apparently on a road to recovery.

Speaking on a Thoroughbred Daily Racing podcast last week, Johnson estimated that saving Princess Dorian, who had earned $137,400 in her 23-race career, would cost $20,000. “It doesn’t matter to me if she were a graded stakes winner or an $8,000 claimer. I felt like it was up to me to do what was best for her,” said Johnson.

“She was not in the barn long, but everyone around her loved her,” Johnson said. “She was eager to train and loved her job. I was lucky to own her, I will miss her.”

Laminitis is the inflammation of sensitive layers of soft tissue in the hooves of horses. In the worst cases, it is severely painful and essentially crippling. It can be managed in the best cases but not cured, making prevention paramount. Horses that develop laminitis, but heal, are more prone to future occurrences, a then-chronic condition termed founder.

Though the precise cause of laminitis is not completely understood, it is believed to be a result of a horse shifting weight from a severely injured leg to other legs, then resulting in pressure on the healthy legs and subsequent inflammation of the laminae that define the condition.

Del Mar was rated the safest track in the United States during 2018. However, the track has now witnessed three fatalities in a six-race span that began Nov. 10. Fatalities occurred on both its main track and its turf track. There have been no racing fatalities in the 34 races since Nov. 10.

However, the California Horse Racing Board (CHRB), the state’s regulatory authority, stated Monday Princess Dorian’s death would not be counted as an official “racing” fatality because she was euthanized as a result of post-surgical complications.