How else do you explain the show jumper’s superhuman ability to keep producing results?

At a time in life when normal adults fill their days with the spoils of retirement and (if they’re lucky) midday naps, Ian “Captain Canada” Millar continues to not only compete at the top level of international sport—but to win.

The 71-year-old rider was one of only two athletes to jump double clear in the team event widely considered to be the pinnacle of equestrian sport. Third to go in the order for Canada, Millar and his veteran partner, Dixson, were the first combination to master the challenging 1.60m track set by course designer Marina Azevedo of Brazil. (Canada’s Francois Lamontagne led the team off with five faults. Teammate Tiffany Foster incurred a single rail to collect four faults.) 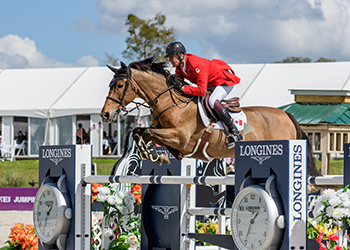 Five of the 24 horse-and-rider combinations would follow suit with clears in the first round.

In Round Two, the ten-time Olympian and his 15-year-old mount repeated their foot perfect performance, posting the first double clear of the day. Canada’s Eric Lamaze was the only other rider to produce two fault-free rounds.

“I don’t think any team in the world has a better one-two punch than we do, and they showed it by being the only two double cleans in the entire competition,” said chef d’equipe Mark Laskin.

Team Canada took the victory with a two-round total of eight faults over Brazil’s 16 fault team total. Ireland and the United States tied for third place with 24 faults apiece. Germany finished fifth with 32 faults while Mexico was sixth with 40 faults.

In addition to the team prize money, Millar and Lamaze split a new €50,000 bonus on offer this season as the day’s top performers—along with the glory of a team bromance 25 years in the making.

“Eric and I are like the bookends—you just have to put someone in the middle and away we go and do our best to deliver!” said Millar.

With two legs remaining, Canada now leads the North and Central America and Caribbean League on 100 points. USA sits in second with 75 points and Mexico, third with 55 points. Two teams in the League will earn a spot at the Final in Barcelona. The next leg will take place in Coapexpan, Mexico in April and the final one in Langley, BC in June.

Chances are we’ll see Millar in at least one of them.