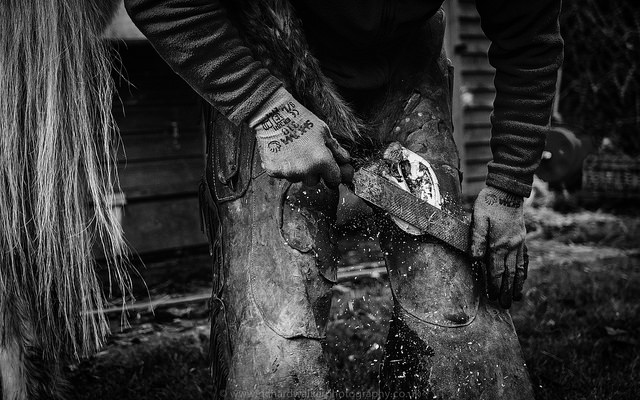 A big part of running a farrier business is educating horse owners.

Everyone is at a different level of knowledge and comes to us with a different background, and we often have to explain what we’re doing and why. Most people are happy to learn how to take better care of their horses, and they’re happy to look up other resources we may suggest. Some people, though, just seem to be resistant to any kind of view that is different than what they already believe.

At one farm, the wife had called us out to trim some very overgrown hooves on two horses the family had recently purchased. The husband was very averse to this plan from the beginning, and he wandered outside to make his views known as soon as we arrived.

“You don’t need to trim horses’ feet,” he stated, as Andres removed at least an inch of broken, cracking hoof wall from each hoof.

“How do they survive in the wild without people? You’re just taking people’s money telling them you have to come out and trim their horse’s hooves.”

We should have just left, but the horses were in desperate need of a trim and the wife (our actual client) was clearly embarrassed by her husband’s behavior and the condition of the horses’ hooves. I don’t do the actual trimming or shoeing, but I usually do most of the talking with clients while Andres is working. I calmly explained why hoof maintenance is a necessity for modern horses.

I didn’t even have a chance to get into other factors, like the genetics we’ve bred for, or balance and traction for riding horses.

This guy was looking to argue, though.

He launched into a lengthy tirade about how his goats don’t need their hooves trimmed, so why do horses? I looked at his goats, turned out in a 10-acre field with a variety of rocky, sandy, wet and dry ground. The two horses, by comparison, were in a smallish, grassy paddock free of stones, sand or any sort of abrasive footing. The animals were literally proving my point about natural hoof care in front of our eyes.

I considered explaining that if his goats were kept like his horses, they would likely need their hooves trimmed. He genuinely did not believe that horses should have their hooves trimmed, though, and I don’t like fighting with people, especially clients. Realizing there was no way I was going to get through to him, I just awkwardly waited out the rest of the trim, collected the money (from the wife), and we left.

Some people will resist reality no matter what you say or do, so you just have to cut your losses and help where you can.