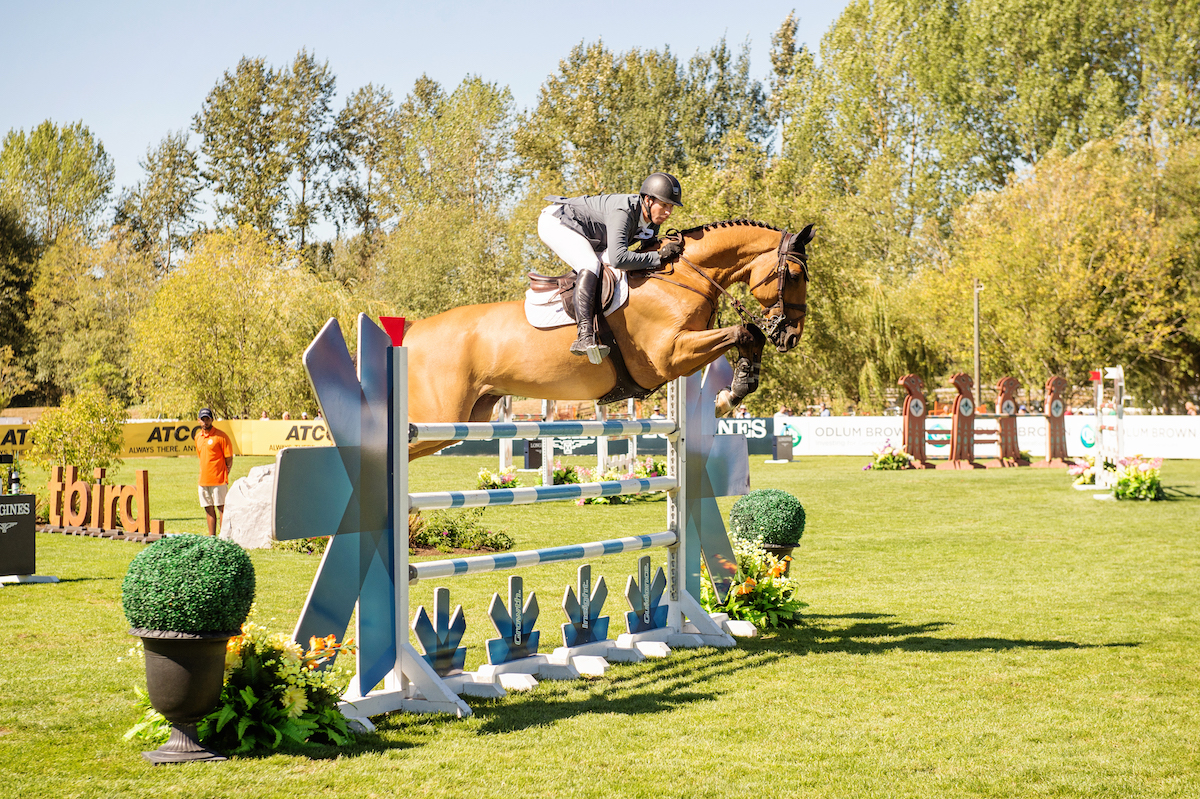 Chris Surbey has done things in the past year and half that have people talking.

Things like climb an astounding 1307 positions up the Longines World Rankings. Barely a blip on the standings prior to 2016—he had jumped in one 1.50m class previously—the former student of Jill Henselwood shot on to the world stage in February that year with a string of horses owned by Spruce Meadows.

By July, he was named to his first Nations Cup team.

He’d ride on two more by May 2017 and make his Longines FEI World CupTM Jumping Final debut in Omaha, Nebraska in April, finishing as the top placing Canadian.

On Sunday, Surbey logged his most recent achievement. At Thunderbird Show Park in Langley, BC, he finished second behind Ireland’s Conor Swail in the $135,600 Longines FEI World CupTM Jumping Langley riding a borrowed mount, Daylight VDL, owned by the Gingras and Halina families. (Swail swept all three FEI classes, capping an incredible week.)

We caught up with the Calgary-based rider earlier in the week to talk about the moments that come to his mind when he reflects on his breakout year and burgeoning Nations Cup career.

A rider’s first Nations Cup is always special. For Surbey, it was doubly so because the horse he was riding in Šamorín, Slovakia— Quetchup de la Roque. “She was just unbelievable,” he enthused.

Also, unbelievable: the double clear they’d post after going first in the class.

“The night before the Nations Cup, Jill Henselwood—she was the chef d’equipe—was trying to decide the order of go. I have a lot of experience with Jill. I used to work for her. I rode with her,” said Surbey.

“She sat us down and said, ‘I have some bad news. I drew first, so the team goes first. Vanessa [Mannix], I think you should be the lead off rider, but you have to promise me that you’re not going to get a time fault.”

Vanessa was, like, ‘Well, I don’t normally get a time fault, but to be honest, we’re not the fastest. I can’t absolutely 100% promise you that I won’t get a time fault.’’ She normally does jump under the time allowed and jumps a lot of clear rounds.

“That was kind of stressful,” laughed Surbey. “But I knew Quetchup was a quick horse naturally and if we stayed on it a bit, we should be okay. And we were! We jumped double clear.” 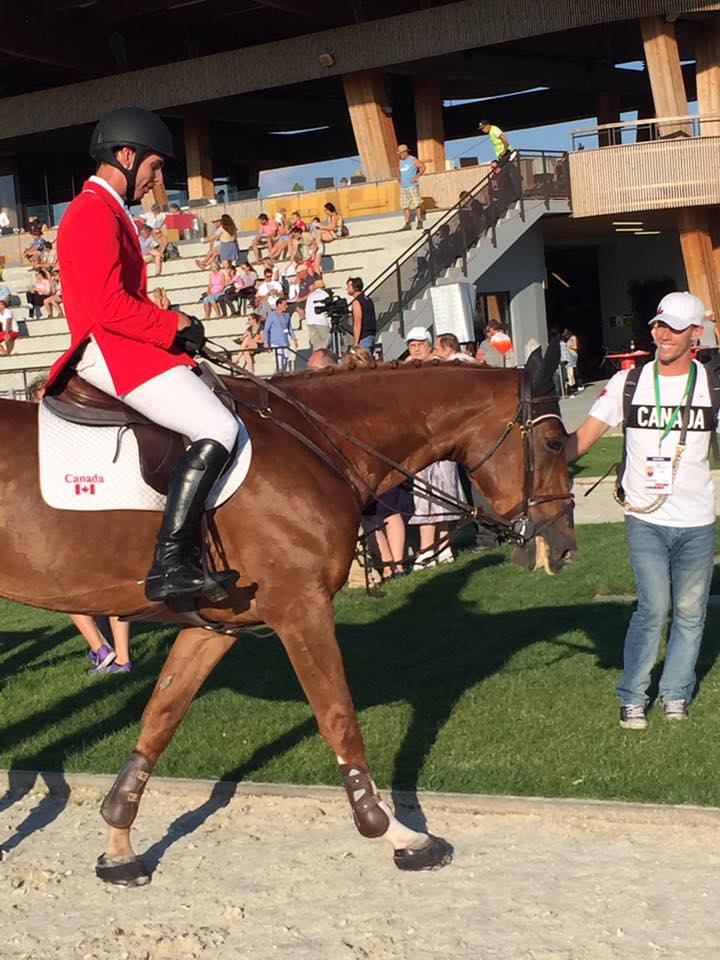 The pressure was higher Surbey’s second time riding for Canada. The Nations Cup in Xalapa, Mexico is one of just three qualifying events for the North American League. Team Canada needed a good result to be in contention for a spot at the Final in Barcelona.

Not on the schedule that week: Karaoke.

Surbey is something of a duet regular with fellow rider Kelly Koss in Calgary. They sing under the stage names “Kiki and Jeffrey” and are known to entertain the karaoke crowd at Ducky’s Bar with such hits as Oasis’s “Wonderwall” and Garth Brook’s “Friends in Low Places.”

When he jokingly suggested the Canadian team go for karaoke in Mexico, he suddenly found himself manning the mic for a Spanish crowd.

“It was this hole in the wall,” laughed Surbey. “We were the only English-speaking people in the bar, there was maybe eight of us. We’re singing in English. We tried singing some Spanish songs. It was fun! We were good. We held our own.”

By “good,” he means terrible, btw.

“I’m actually a terrible singer,” confessed Surbey. “A lot of people can verify that. But we’re entertaining. I’m fairly sarcastic so I think I embody that in my singing.”

Just don’t expect everyone to appreciate his particular brand of vocal stylings.

“I do as many songs as they let me,” he said. “Sometimes after one or two they’ll say, that’s enough of that.”

The last stop on the North American League calendar, the Nations Cup in Langley this past May, was Surbey’s favorite to date.

“It was enough pressure because we hadn’t qualified for the Final yet. It was a Canadian Nations Cup team and you’re in Canada, which is special. We had Ian Millar, Tiffany Foster, Keean White—it was a serious team,” said the 30-year-old rider.

“Okay, we were disappointed to be second but everybody jumped some good rounds, so it was not a disaster by any stretch.” 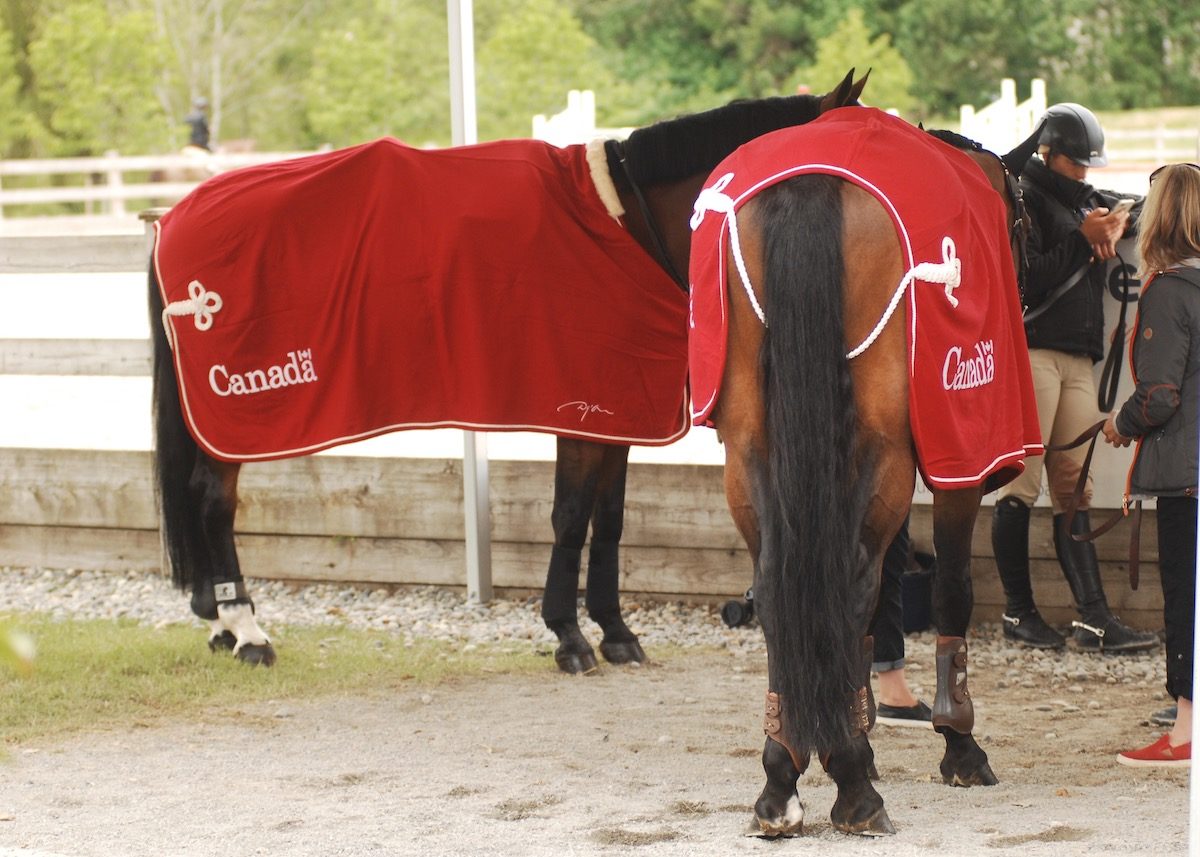 The moment that stands out for Surbey though was after the class.

“So, we all go in for the ribbon. The Americans are in front of us on the podium and there’s this row of representatives from Thunderbird and the sponsors who come down to shake your hand and give you your ribbon. I’m standing at one end. Here comes all the people working their way down the line. I look down and all of a sudden, I see my dad. Who doesn’t belong there. At all,” he recalled.

“He’s got his camera out, taking pictures of me. I think he asked Jane Tidball [president of Thunderbird Show Park] to take a picture of us. He’s in the middle of the whole thing!”

‘What do you mean, let me? I just came in. Nobody stopped me.’

He kind of begrudgingly leaves.

Ian had met my dad earlier in the day, so I think he realized what was happening but didn’t think much of it. Tiffany was like, ‘Who’s that guy.’

She said something along the lines of, ‘I think your dad should meet my mom because she’d totally do the same thing!’

“That was pretty bad,” he laughed.

When Surbey next rides on a Nations Cup team for Canada remains to be seen. Now a free agent, he’s undecided where his career will take him this year. But one thing seems certain: there’ll be singing along the way. (Just don’t hold your breath for Surbey Christmas Special album.)