Even the Leadline Horse Can Dump You in the Dirt 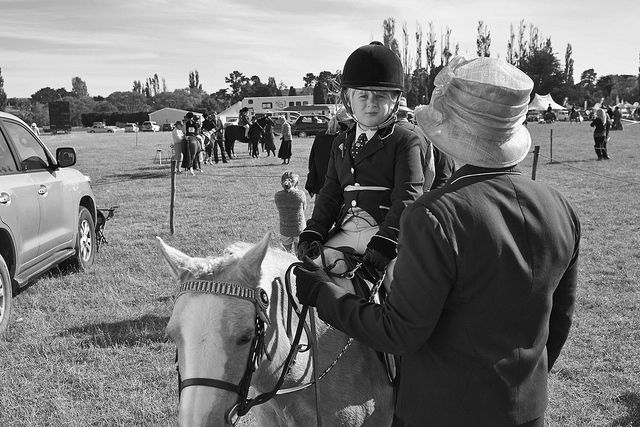 A few months ago, I fell off our three-year old son’s leadline horse.

Chiquita is the sweetest, chillest, laziest mare you can imagine. Nothing bothers her—I could put Henry, who weighs all of 30 pounds, up on her and turn them loose and she would do no more than walk slowly with him. (I don’t do this, because I’m generally paranoid about safety, making this story all the more important).

She’s one of those horses that just has intuition about who is up on her back and adjusts her behavior accordingly—not that she’s ever particularly wild and crazy.

On the day of my incident, I was riding her in my dressage saddle, thinking I’d get her ready to go to a schooling show. She has been trail ridden extensively, but has never been to a horse show, so I wanted to take her to one before Henry tries to do leadline on her at a show.

We were trotting around the arena like normal, and I asked her to turn and cut across the arena to change directions. I have spent a lot of time teaching her to be more sensitive to the aids, because she came to us pretty dull. Turning her used to be similar to turning the Titanic—slow, stiff, and needing a lot of space to pull it off. That day, however, her turn-on-a-dime quarter horse roots came out. She made the 90 degree turn like butter, maintaining a nice, forward working trot.

Because riding Chiquita is often a lot of slow, repetitive, back-to-basics work, I’m sure I am not always as attentive as I might be when riding my more devious-minded, quick-reacting Arabians. I know better than to let my guard down with them.

In other words, on the horse I really trust, I got lazy, and I was looking over at what was going on in an adjacent paddock. (Kentucky Derby qualifiers involving an aforementioned Arabian and TJ Rockstar, the donkey).

When Chiquita made the turn quickly, fluidly, just like I asked her to, I was caught off guard.

I may have stuck on still, monkey-style, but when Chiquita felt me lose my balance, she did what any leadline horse worth their salt instinctively knows to do—she stopped. Like now. Unfortunately, I did not get the “halt at X” memo, so I kept going, right over her shoulder, somersaulting in the air and landing on the back of my head.

When I sat up, a bunch of liquid dripped onto my boot. I assumed I had a bloody nose, but when I wiped my nose, it was just clear fluid.

I shrugged it off as snot, got up and grabbed Chiquita, who was standing right where she had stopped with a look of complete horror on her face. I’m 99.9% sure no one has ever fallen off of her before, and judging by how she’s acted when ridden since, she has now made it her mission to make sure it never happens again.

I went and found my husband and told him what happened (“You were riding Chiquita, right? Did you clothesline yourself on a tree branch or something?”), whined for a few minutes (mostly about how unsympathetic he is), then went and rode her for a little while longer, where she treated me like the rank beginner I appeared to be and refused to be prodded past a medium jog with slow, sweeping turns.

All the while, my runny-snotty nose continued off and on.

After finishing up in the barn, I sat down to pull off my boots. When I bent over, a rush of clear fluid came out of my nose again. This seemed like more than absolutely reasonable for a snotty nose that I hadn’t had until I hit my head. I Googled it (because of course I did) and immediately packed myself off to the ER.

That “snot”? Cerebro-spinal fluid. In other words, my brains were leaking out of my nose (kind of).

I didn’t hit my head that hard. This was not some rank, unbroke horse. We weren’t going fast, and we weren’t doing anything all that athletic or challenging. My helmet (yes, I was wearing one!) was dirty, but didn’t appear damaged. I never lost consciousness or vomited, and I could have answered any question you threw at me. I jumped right up and went about my business.

But the sloshing your brain takes during any kind of hard blow can cause damage.

My injury, while scary and semi-dramatic (“brains” coming out your nose ups the drama factor considerably), just required some preventative antibiotics and taking it easy for a week or two. It does increase my chances for problems from repeated concussions (like an NFL player, only I’m a lot shorter). The moral of this story?