I was at a dressage show a few weeks ago, and after schooling in the ring on Friday night, I took Nixon for a hack around the Kentucky Horse Park. This is pretty standard for how we work—a good ride rewarded with a loose rein. It recharges his brain and restores my inner cowgirl, getting me out of the 4-walled ring.

A fellow competitor came up to me afterwards and asked how it was that I could ride such a hot horse on the buckle. I laughed, letting her know this was Nixon’s favorite thing. Can he happily canter a stadium round? No. Did he not trot for three months? Yes. But, did he always hack happily on the buckle? You betcha.

The ESPN article about Nixon that makes me laugh so hard reminded me of this. In order to get his brain back involved with his training, they hacked him. They would take them around the backside, making the shed rows their own trail. And I’m sure his trainer was laughed at, as his big horse—his graded stakes winner—hacked to and fro. But that is how they got through to him. Nixon began to thrive in his training. He began to win graded stakes races. The hack made all the difference. 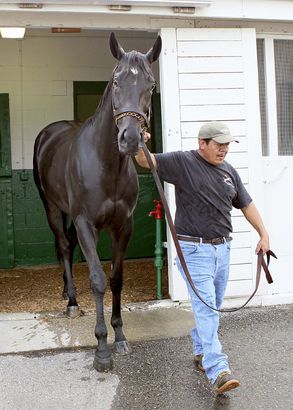 “Nixon” out on a backside adventure.

While I was struggling with Nixon last summer I was reminded of this. I have always hacked all of my retraining projects, a lot; alone, in a group, on the trails, on the road or just in a field. Just because Nixon had a more lucrative race career doesn’t mean he should be treated any different.

I have learned that the most confusing aspect to most of these ex-racehorses is the arena, and yet, it’s the first thing we put them in. They don’t understand a 20 x 60 meter dirt surface. They have never seen the standards or the flower boxes that we circle them around. I am fully cognizant that each of them will need to eventually behave in an arena. I also put them in there first thing. But every single one I have retrained felt more comfortable on a hack.

So that is what we do. I use the hack as a reward system. Jump your first crossrail? You get to hack. Pick up both leads? You get to hack. Finally stand still while I curry your butt? Oh wait, that was only Nixon who struggled with that. But, he still was rewarded with a hack.

And what does the walk hack do? I see so many people so consumed with training they don’t realize the training that occurs on a trail ride. These horses learn trust. They learn to be fearless. Everything that they encounter on a walk hack will be beneficial to them at a horse show. My horses have seen bicyclists, creeks, stone walls, downed branches, tractors, joggers, gates and even the occasional animal. Therefore, when I take them to a horse show or an event, I know what to expect.

I didn’t show Nixon much last summer before the Retired Racehorse Project TB Makeover. In fact, we only went to two schooling shows. But, I knew that he was pretty fearless. I had been hacking him both on and off property for months. When he was good, we hacked. When I got frustrated, we hacked. When I wanted to go ride with friends, we hacked. And when I just wanted to be reminded that my horse had a brain (which was often), we hacked.

I have written before how no two horses are the same. You can’t put a horse in a bubble. And you can’t train every horse identically. I stand by that. But the one thing that I have never seen hurt a horse or it’s training, is hacking. 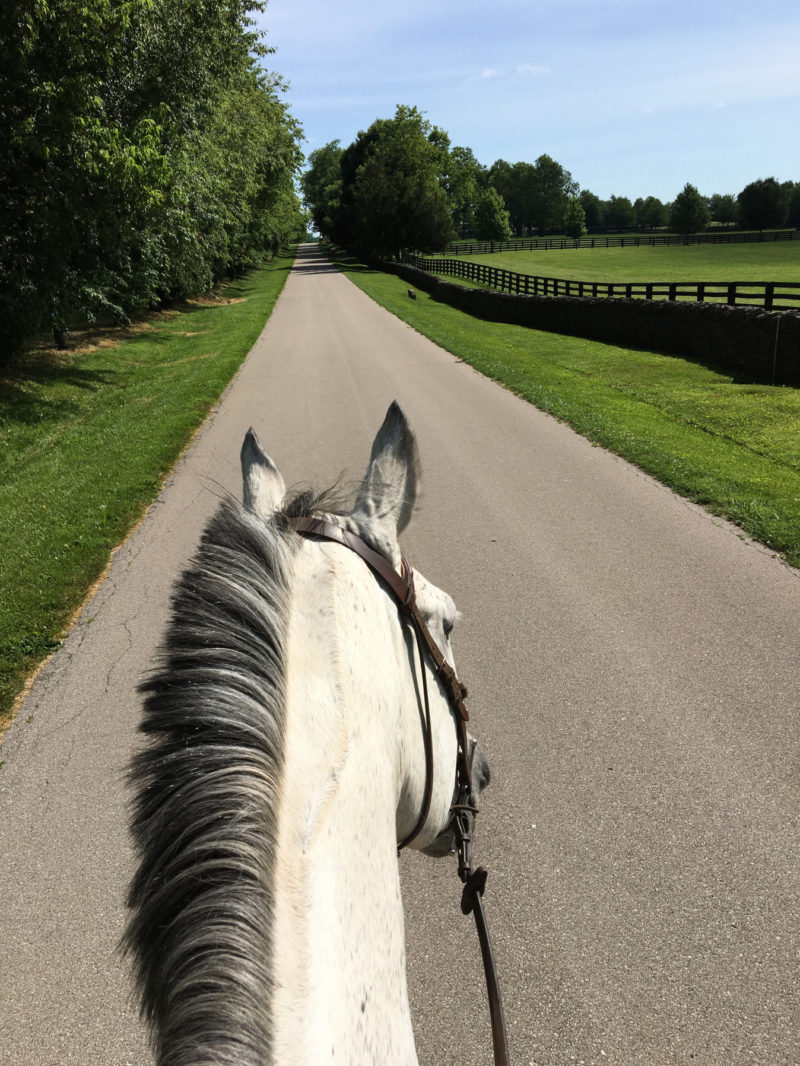 I have heard so many excuses about why not to hack, with the most predominant being that the horse is tense, spooky or hot. I stand by the statement that that is 98% the rider. Have confidence in yourself. Have confidence in your seat. Most importantly, have confidence in your horse. They hacked to and from the track their entire lives. They hacked to and from the fields they were broke in. They have been exposed to so much on the farms they were born on, at the sales, and at the track. Trust that exposure.
And the common denominator to all of those hacks is that they were being sat on by a fearless individual? An exercise rider or a jockey. And yet, even racing fit, they walked out.

So get out there. Put your horse on the buckle. Find an old back road or hell, just a big pasture, and walk. Sink your weight deep into the saddle, take a deep breath, put on a good song on your phone and take in the scenery.

My best thinking is done on my hacks. I compartmentalize my brain so much so that I can finally unwind as my horse walks his $300,000 walk. And because I trust him so much out here, I can pick up my phone and multi task.

So this blog? It was brought to you by me, Nixon, an iPhone, and The Lumineers—all on a walk hack.

Read more at A Yankee in Paris