Here’s a T-Rex Riding a Paso Fino Because Why the Hell Not?

Home > Blog > Horse Play > Here’s a T-Rex Riding a Paso Fino Because Why the Hell Not? 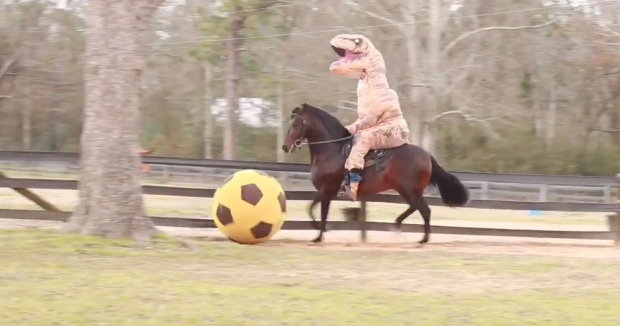 This video comes courtesy of Michael Gascon, owner/operator of Gascon Horsemanship in Poplarville, MS. The 26-year-old has won numerous National Championships showing and training Paso Finos, and is clearly adept at the art of desensitization and earning his partner’s trust.

So what’s with the T-Rex get-up? Great question, mom. Think of this Jurassic World T-Rex costume as the new horse head mask. Don’t try to understand it, just accept that it’s here and not going anywhere…for at least a few months.

That’s some fine ridin’, Rex. This horse may not be bombproof, but it’s T-Rex proof and that’s gotta count for something.