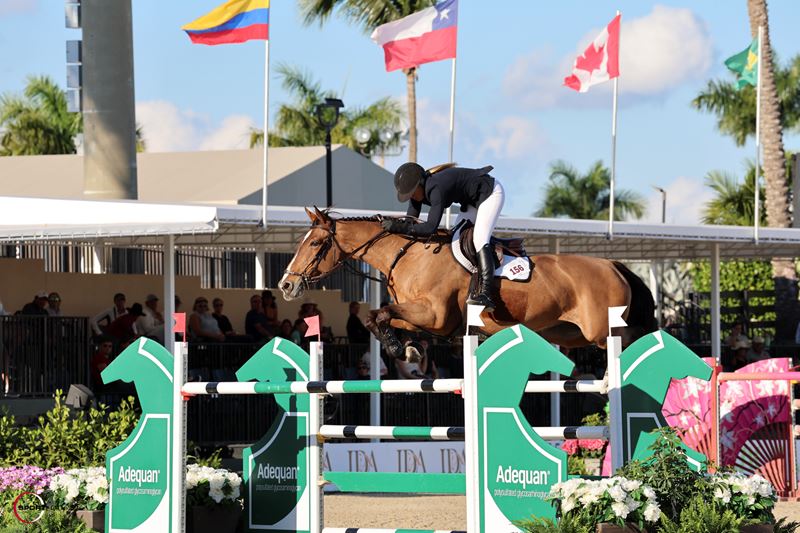 “We went to our first horse show at Tryon in October and the very first week I showed her I jumped the CSI3* under the lights, which is saying that I trust her tremendously.”

In any relationship, trust is a critical element that takes time to develop. This is especially true for horses and their riders, who communicate with an unspoken language. The exception to the rule is the rare yet universally accepted phenomenon of natural chemistry, something which Scheiring and Mariposa have in place of familiarity.

On Thursday, their partnership of brief history was put to the test for the Winter Equestrian Festival (WEF) Challenge Cup. The class served as Week 1’s official kick-off along with the qualification for the first Saturday Night Light’s Southern Arches Grand Prix CSI3*, and no doubt many riders were warming up with some nervous butterflies in hopes of setting the right tone for the circuit ahead.

Butterflies can often hinder your efforts in high pressure situations. Though the opposite was true for Sarah Scheiring (USA) with Mariposa. The Nick Granat (USA) designed course effectively thinned out the class of nearly 70 combinations, giving way to an 11-horse jump off where Scheiring confidently sailed into pole position with a brisk 37.30 second track.

On Thusday, everything went in Scheiring’s favor, but still not quite to plan.

“For my jump-off I had quite a competitive plan. I had planned on the six [strides], which was the leave out from [fences] one to two, and it was a lot further away than I anticipated. Luckily, I have a superstar horse. I know that no matter what she’s always going to try her hardest, so I took a shot. It was a fast class; Allison [Robitaille] and Jacob [Pope] really laid it down.”

Scheiring’s risks paid off, bumping Pope with 11-year-old gelding Highway FBH into second place (38.29 seconds). Robitaille landed in third with 10-year-old mare Oakingham Lira. Yet Scheiring yielded all of the credit to Mariposa, and her remarkable heart.

“It’s a different league of animal than anything I have ever experienced. She is all heart, and she tries so hard. I think she got that from her mother, Flora De Mariposa, which was also an unreal horse,” said Scheiring.

You might remember the now 18-year-old mare Flora De Mariposa as Penelope Leprevost’s (FRA) 5* winning mount. The mare retired with a nearly 70% clear round and top ten finish rate at 1.60m, according to Jumpr App. They also helped secure the gold medal for France during the CSIO5* Nations Cup of La Baule in 2017.

Margriet De Mariposa doesn’t have all the stats and medals of her dam. (Yet.) But Scheiring believes she has everything she needs and more to prime a happy and successful career.

“I think there’s nothing more important than the heart of a horse and she is all of that,” said Scheiring.