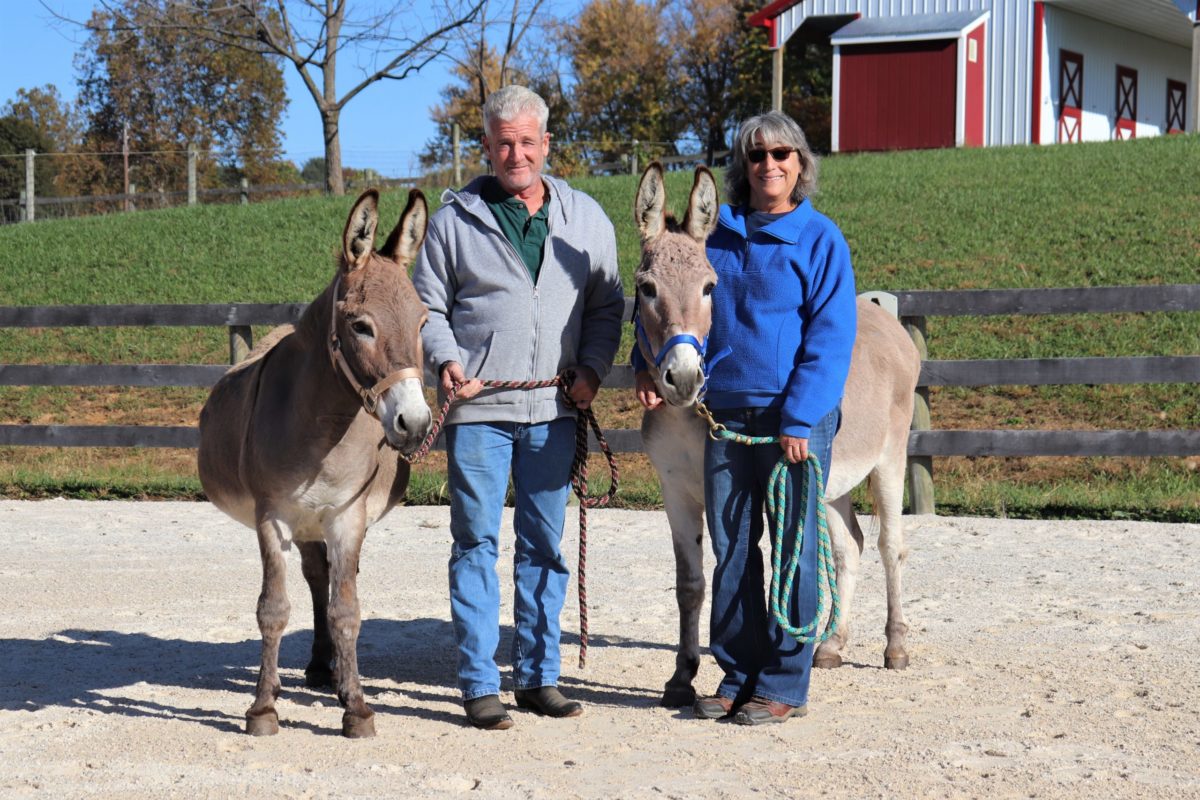 Undoubtedly, horses are the most common animals found at a horse rescue, but donkeys and mules are also subject to hardships by way of neglect and abuse.

Like horses, donkeys and mules serve a purpose as wonderful companion animals for equine lovers as well as for ponies and horses. These social, inquisitive, and intelligent animals bond strongly with one another, so they’re often seen in pairs.

Two such donkeys are Fiery Frito and Hot Habanero. In September 2021, the two donkeys arrived at Days End Farm Horse Rescue (DEFHR) in Woodbine, Maryland, as part of a neglect case on a property in Frederick County, Maryland.

While it’s not uncommon for equines from neglect cases to be found underweight, Frito and Habanero were obese and also suffered from hoof neglect. The donkeys were very wary of humans, but their personalities blossomed under the care of DEFHR staff, particularly with extra attention from DEFHR Barn Assistant Tory Thomas.

Over the course of a year, Frito and Habanero came into their own and they ultimately found a loving forever home with Melanie Dovali and her significant other, Dave, in the fall of 2022.

We caught up with Thomas and Dovali to learn about the donkeys and their journey to happily ever after.

You assisted with Frito and Habanero’s impound. Tell me about that, including their living conditions
and their transport to DEFHR.

When we got to the site in Frederick County, the house was condemned, and interestingly, it was in a residential area. It definitely wasn’t somewhere you would have expected livestock to be living.

The donkeys, two horses, and a pony were living toward the back of the property on a rather steep hill. We entered through a typical backyard fence and were immediately under a patio. When we walked further down the hill, we saw the animals. They were blocked off in a small area and I noticed there was a shed that was extremely messy and filled with feces and urine. The shed was their only way to escape the weather, but it couldn’t fit all of them.

It took some bribing and help from [DEFHR Assistant Trainer Leigha Schrader and an animal control officer] to get the donkeys onto the trailer. The ride to DEFHR’s farm was peaceful, although we knew the animals were going to be stressed when we arrived on the farm.

Tell me about your experience with them in their first few weeks at the farm. What were the
challenges?

Initially the donkeys were not trusting of us at all. They ran from us quite a bit and were scared. When we were able to catch them for grooming, they [tended to kick out]. After some time and consistent grooming, they learned that we weren’t going to hurt them and only wanted to give them the love they deserved. They were hilarious to lead and needed to be led together. They were very clearly bonded.

How did you overcome these challenges and begin to build the human-donkey bond with them?

Habenero was definitely the more outgoing of the two and after some time, he would [proactively seek out] scratches and kisses. Frito was initially very nervous, and it took some time to be able to catch him easily in the field. During work each day, I would make it a point to catch both of them, and give them ear scratches and a couple of kisses on the nose. This went on for a couple of months, and eventually, when I walked into their paddock, they would come up to me for loving.

Frito will always be a little more skeptical than Habenero, but it was the most heartwarming feeling when he finally came up to me! It took a lot of repetition and reassurance from me, but it was so worth it. Right before they were adopted, I was able to walk into their paddock and hoist either one of their heads up on my shoulder for scratches and kisses. It was the most adorable thing. They would close their eyes and make these little grunts that just made your heart melt. I even taught them to give a kiss before treats, which they loved since they were moochers!

What was special about the donkeys’ relationship with one another?

We called them brothers because they were so close. Habenero would scope things out and let Frito know it was okay. They would eat, sleep, roll, and play together all of the time. They even became our
unofficial greeters since they were in the paddock closest to our entrance. They loved to say hi to
everyone walking in.

What do you love most about your job at DEFHR?

I have seen many equines come and go, and it’s an absolutely incredible experience to watch the light
come back into their eyes and for them realize there is more in store for them in this world. There are always animals that touch your heart, especially in this job, and the donkeys were certainly that for me. Their brays, floppy ears, and squishy noses are missed by many at the farm, but we are so happy that
they went to such a loving home. The donkeys have given me a newfound love of our long-eared friends, and they will always hold a special place in my heart.

Tell me about your background with equines. In addition to horses, did you have experience with
donkeys prior to adopting Frito and Habanero?

I grew up in California on a small farm [so horses were a part of my daily life]. My sister and I participated in gymkhana events and western pleasure shows and we went on some of the most exciting trail rides in the southwestern U.S., including New Mexico which became my home later in life. As an adult, I enjoyed competing at hunter/jumper shows and also spent a few years eventing at the lower levels. Today, I still go on the occasional trail ride.

In 2000, I purchased a donkey from Chihuahua, Mexico, at an auction as a companion for my two horses. I always loved long ears, and he fell into my family. He was about 20 years old at the time, and I named him Bogie. When I moved from New Mexico to Maryland in 2008, my equine crew came with me along with three cats and three dogs. Bogie and I were close friends for more than 20 years but sadly he passed a few years ago at more than 40 years old.

What led you to consider adopting a donkey?

Earlier this year, I decided to look for an older retired horse since it had been over a year since I had an equine companion in my life. I always kept an eye on various rescue organizations for inspiration and to
see if anything might be a fit. And then, as I was searching one day, there they were — the most beautiful long ears at DEFHR! I fell in love with both of them immediately. It’s funny how a picture can
send such a strong vibe that we were meant to be together. It was the same for my other half, Dave. He
said, “let’s go for it!” and we inquired about adoption.

What was your first impression of Frito and Habanero when you met them at DEFHR?

When we initially met Frito and Habanero, I found them to be so charming! Bogie had taught me a lot about donkeys, and it was clear that [DEFHR’s Head Trainer] Sara Strauss, Tory [Thomas], and the whole team at DEFHR did a wonderful job taking care of and working with the adorable long ears.

Now that Frito and Habanero are in their forever home, what will their daily routine look like?

We have four acres that are mostly pasture in addition to a run-in shed. Frito and Habanero share their
home with barn cats, chickens, and turkeys. In the first month of living with us, they already know the
routine which includes a 5 a.m. wake-up call, stall cleaning, feeding, and selecting which field to let them out in for the day.

What are Frito and Habanero’s personalities? Have there been any challenges in working with them?
How are they different from horses?

They are both 18 years old and are mirror images of each other. When one is strong the other is allowed to be stubborn. And they switch roles. They both love treats, rubs, brushing, and kisses. Habanero has the loudest bray and Frito uses his “inside bray.” I am working with them on herding and some days I think they’ve got it down pat and other times they’ll say, “not today!” Habanero likes to stop and graze, while Frito is always looking in for pockets for treats.

There haven’t been any significant challenges, however, they both don’t like the manure fork and try to avoid it when I am cleaning their stalls. Patience is what is needed when working with long ears. You can
tell horses what to do, but with donkeys, you need to ask them and let them think it is a good idea.

What advice would you give to someone interested in equine adoption?

I have spent my life with horses, so adoption was very easy for me. However, even if you are becoming a
first-time horse owner, adoption is a wonderful opportunity to allow someone help find you the best
equine fit. I personally love the donkeys and mules. They can teach you so much.

I hope this gives you some insight to my beautiful long ears, and how they have given me back what I
had before. I am forever grateful to Sara [Strauss] and DEFHR for all their support and allowing us to
bring these special boys into our home. They are a joy.