The Authors Who Shaped Our Childhood

Home > Blog > History > The Authors Who Shaped Our Childhood 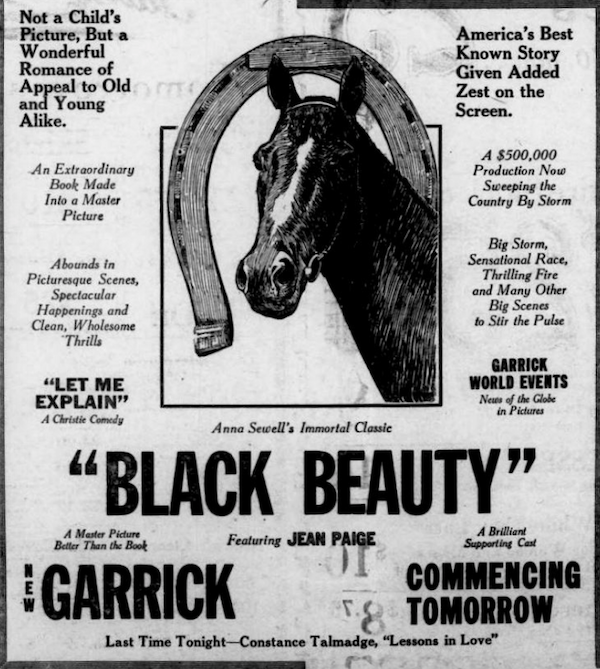 I’m unsure what got me thinking about The Black Stallion the other day, but it cropped up in my mind and felt perhaps there was a story in there somewhere.

Since I fancy myself a “writer” I’ve focused on the authors rather than the stories, as I was curious to know how horsey they were. Now, I will say that because I’m of a certain age I focused on three authors I grew up reading, but I think I can get away with it because they all wrote classics.

She only wrote one book, but it was a gooden.

Anna Sewell (1820-1878) grew up in England but didn’t have an easy go of it. Her father was a shopkeeper and bank clerk who seemed to struggle to bring in enough money for the family and they tended to move around a lot in search of better work. What was useful, however, was that her mom was a poet and children’s author.

Anna suffered from a bone disease, though it’s unclear what disease, and at the age of 14 she fell and broke both of her ankles. The fall left her in chronic pain and she was unable to stand or walk for long periods of time. Laid up, Anna spent her time helping her mom edit the children’s books she was writing.

You are probably thinking I’m about to say, “And then Anna had this brilliant idea for a book.” I too had that thought, which was wrong, as always.

Anna relied on horse-drawn carriages partly because it was the 1800’s and partly because of her injuries. However, due to the amount of time she spent in carriages she witnessed a lot of neglect and inhumane treatment of horses, and from there, her fondness and empathy toward them grew. It was this that inspired her to write Black Beauty.

It took Anna until her 50’s to put pen to paper and a further six years to write and complete the book. Her health had deteriorated significantly, and she once again found herself bedridden. Writing was such a chore that she dictated much of the book to her mom.

The book, as Anna Sewell had intended, brought attention to the cruelties that many horses faced while dutifully doing their job. The story of Black Beauty encouraged kindness, sympathy and compassionate treatment towards horses, giving insight into humane training practices, stable management and overall animal husbandry.

The book, as most of you know, is told from the point of view of Beauty and the original title was Black Beauty: The Autobiography of a Horse which was never intended to be a children’s book.

Anna Sewell died five months after the publication at the age of 57 and was outlived by her mother.

Over the last century, Black Beauty has been turned into a TV show, mini-series, stage play and into eight movies, the first being in 1917 and the last in 2020. It is considered a children’s classic and has sold over 50 million copies in several different languages.

As a child, I loved the Billy and Blaze books. The illustrations are what drew me in. I wanted to be right there with Billy jumping logs, hacking down roads and trotting through fields. To be fair, that was my childhood only less pristine. I don’t believe my pony and I were as remotely tidy as Billy and Blaze.

Interestingly, and I am getting a little ahead of myself here, Anderson drew his images in graphite rather than colour as is the norm with children’s books. He felt that if the images were realistic you didn’t need to use colour to capture a child’s attention. It certainly caught my five-year-old attention. Anyway, Anderson used lithography to reproduce his illustrations and many of his books were done directly on stone, which sounds archaic, but isn’t.

He attended the Art Institute of Chicago before moving to New York to become a freelance artist, where he made a career for himself doing illustrations for other authors.

At some point in his life, Anderson took up riding, though I can’t seem to track down if he started as a child or an adult. Nevertheless, he spent a considerable amount of time with horses and studied them with the purpose of understanding their confirmation and how they are put together. Later in life, he rode dressage and became a qualified hunter/jumper judge.

It wasn’t until Anderson was in his fifties that he decided to add text to his own drawings. Welcome to the world, Billy and Blaze. When it was all said and done, he had 35 books published.

The Billy and Blaze books were based on true stories and people he knew but the plots were fictitious and focused on the care of horses. He even wrote Heads Up, Heels Down: A Handbook of Horsemanship and Riding, which some of you may remember.

C.W. Anderson rode daily and apparently traded a portfolio of his drawings for three acres of land where he and his wife built a house and stable that they named “The House that Blaze Built.”

Who could ever forget The Black?

Walter Farley (1915-1989) grew up in New York City, which is a far cry from anything horsey, but he lucked out with having a horse trainer for an uncle. When Farley was young, he spent as much time as he could helping at the stables learning about and falling in love with horses.

Though the uncle was considered a professional horse trainer, he switched disciplines rather frequently. He started as a racehorse trainer, before he moved on to show horses, then to trotters and pacers and finally back with thoroughbreds. This chopping and changing of disciplines allowed Farley an insight into many aspects of the horse world, which helped him create his much-loved books.

Farley started writing his first book, The Black Stallion, when he was in high school and finished it while doing his ungraduated at Columbia University. Random House published the book in 1941 when Farley was 26 and he used his first advance to travel. He continued to travel for the next several decades, stopping only long enough to write another book. I believe that is called living the dream.

Despite The Black Stallion being published during war times, it did exceedingly well and as such he was encouraged to write a sequel. WWII eventually put the kibosh on things for a few years and Farley joined the US Army where he was assigned to Yank, which was a weekly magazine

After the war, he sat back down and wrote 20 sequels to The Black Stallion the final one, The Young Black Stallion, was published in 1989.

In total Farley penned 34 books, the latter ones were written by both Walter and his son Steven Farley. The books are still in print and published in more than 20 countries.

Though there was no mention of this on the Walter Farley website, I feel I must add that there was a TV show called The New Adventures of the Black Stallion, based on the book series that was filmed in my hometown. Mickey Rooney was even still the trainer as he was in the original movie. I’m not going to lie; the show had a few gaping holes in it, but I was compelled to watch it, nonetheless.

The Moral of the Story

I didn’t write this post with the intention of having a moral, yet here I am. What I’ve learned through my research is that if you want to do something, no matter your limitations or age you might as well give it the old college try, because you just might succeed. Stranger things have happened.

Now, to take my own advice.