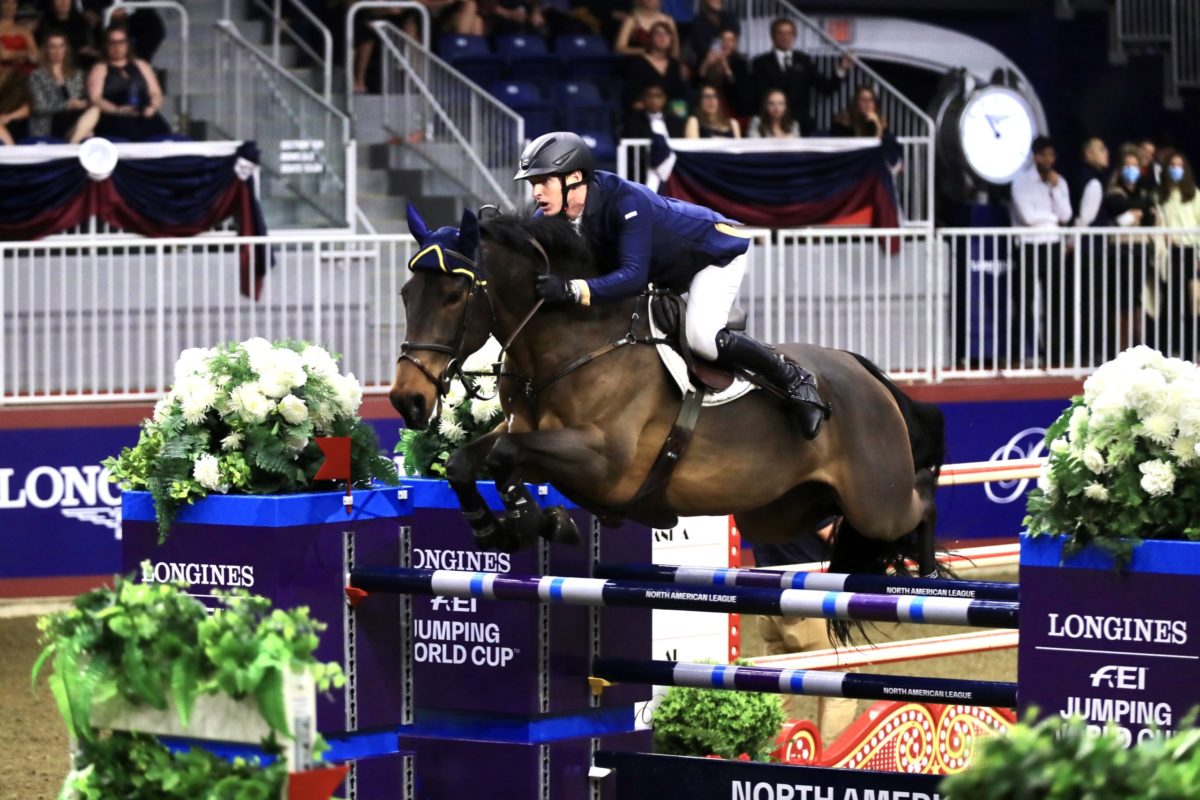 Like no great conquests, it wasn’t a simple course to the finish. To up the stakes even further, it was the 100th anniversary of the Royal Agricultural Winter Fair in Toronto, ON and a local show for Coyle, who works out of the nearby Lothlorien Farm. The pressure was on for a hometown win, but as history shows Coyle and Legacy are known for leaning into a challenge.

The Michael Vaillancourt (CAN) designed course proved to be a hefty one, even for the star-studded field, evidenced by the humble three rider jump-off. Even still, there were no slim margins along the second track, because Coyle and Legacy were the only pair to sport a double clear effort.

“For sure it was not a simple course, and later on in the course was where the course designer was trying to test us the most,” said Coyle, who also took the opportunity put his mare to another test. Spoiler alert, she aced it.

“In the jump-off, Legacy can be very fast but I haven’t done that many where I’ve been really asking her to go as fast as possible. I saw the distance early to the last fence and that gallop is something that I haven’t done much with her, but she went all the way.”

An early distance opened Legacy’s gallop, and she stopped in 37.02 seconds, with time to spare. Lexington’s winner, Daniel Bluman (ISR), collected a rail on course 11-year-old Gemma W and finish on 39.21 seconds. Tiffany Foster (CAN) rounded out the podium with 11-year-old mare Northern Light, also with 4-faults and with 44.23 seconds.

To date, the Longines FEI Jumping World Cup series has been a ruthless game of thrones, with fellow Irishmen Conor Swail kicking his feet up at the top of the iron podium for the opening Sacramento leg and then once again in Washington.

They’re fierce competitors in the ring, but if they have to relinquish a trophy they’d prefer to pass it between each other. It’s a unique dynamic, especially considering Coyle used to be employed by Swail when he too was working out of Lothlorien Farm.

“If it’s not me winning, I like to think I want him to win and visa versa. We were just talking, and the last thing I said was, ‘Is the main thing to go clear, or do I need to be quick as well?’ And he said, ‘No, you need to be fast.'”

With the win, Coyle has risen through the North American League (NAL) standings, now saddled in third place with 32 points overall behind Swail (50 points), who was dethroned by Bluman with 54 points. There are still four more installments before the leading NAL rider can be determined, but the Royal Horse Show’s Leading International Rider title belongs to Coyle.

Legacy, who is owned by Canadian Ariel Grange, was also named the Leading Canadian Owned Horse. For the mare the recognition is certainly well deserved, because the Longines FEI Jumping World Cup™ Toronto is yet another success along her shining show jumping tour this year.

A bronze medal at the ECCO FEI World Championships in Herning, Denmark, a bronze for the Irish team at the CSIO5*-NC in Rotterdam, Netherlands, a gold in the CSIO5*-NC at Thunderbird Show Park in Langley and a recent win in the CSI5*-W Welcome Stake at the Washington International Horse show is just a selection of her top results. Statistically, that looks like a 57% top ten finish and 48% clear round rate at 1.60m according to JUMPRApp.

The thing about show jumping is that no matter how solid your odds look on paper, there are no guarantees, just ask Coyle, who had some challenges finding his rhythm in Toronto no matter how focused he was on a win.

“The Royal is an extremely great show for a lot of reasons. It’s Ariel’s hometown, she’s from Toronto, and that’s where the home farm is, so it’s a really special show for that reason. That’s maybe why I was trying too hard to have a good result this week and nothing was happening, but thankfully [Saturday] was good,” said Coyle.

With four World Cup qualifiers still ahead of, Coyle will have to rely on Legacy now more than ever if he has ambitions to continue advancing up the leaderboard.