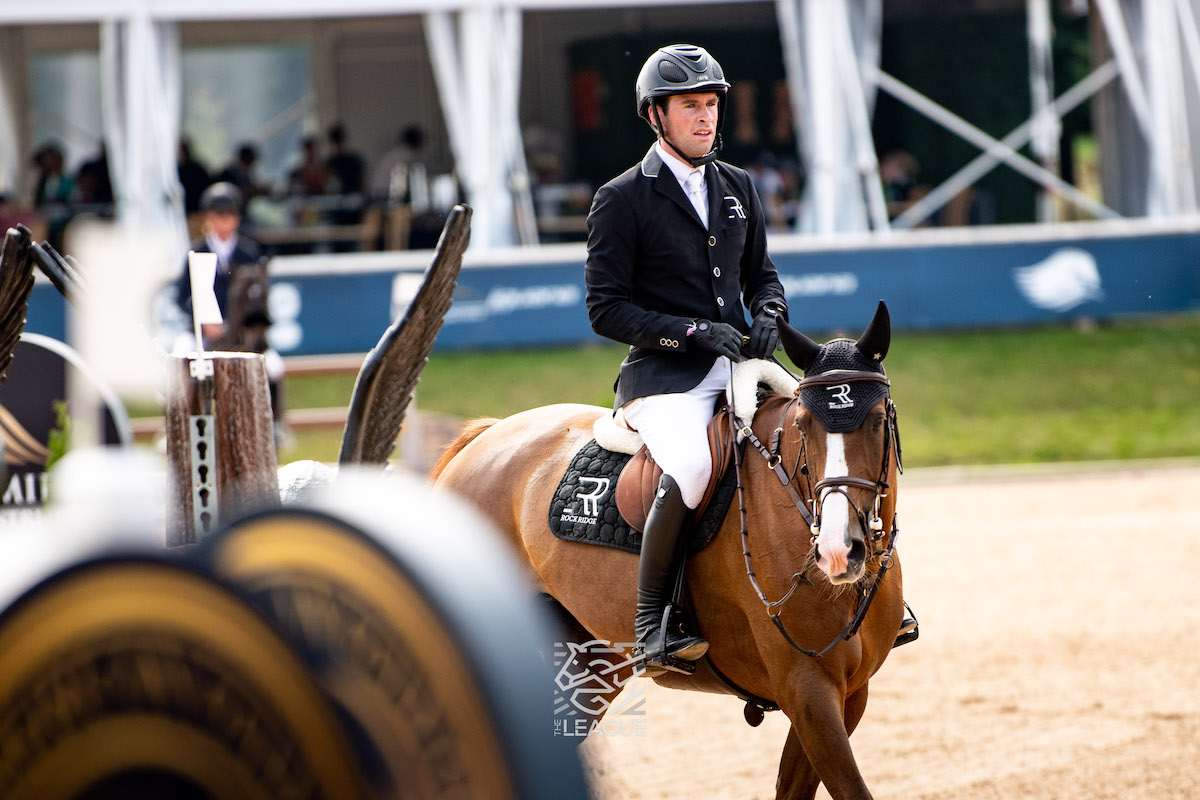 Many riders choose to attend college as a fallback plan for their dream job in horse sport. For Simon McCarthy, the safety net only went so far.

“My parents made me [take my college entrance exams], and rightfully so, because they didn’t see a career in show jumping for me at the time,” McCarthy explains. “I went to college, and I lasted, like, six weeks. And then I said, ‘This isn’t for me,’ and I got on a plane and went to Wellington [Florida]. The rest is history.”

A brief but eventful history, as it turns out.

McCarthy, 27, has certainly been making up for lost time. Aboard Rock Ridge Farms’ 11-year-old Holstein mare, Gotcha, the Irish rider has been blazing a path as part of the 5* circuit-dominating Helios Major League Show Jumping (MLSJ) team, with recent victories in Traverse City and Toronto. He and Gotcha have also earned grands prix wins in the $37,000 Turnham Green Two-Phase CSI2* in Traverse City this July, and the $37,000 Dover Saddlery 1.50m Classic CSI4* at the Palm Beach International Equestrian Center last December.

It’s an impressive resume, by any standard, and even more so given that McCarthy’s international success was far from guaranteed.

“I think, for me, it’s very rewarding, because I did have to work very hard at it. I wasn’t talented,” McCarthy says. “Every time I moved up to a higher level, I did fail at it straight away.”

Born in Norway, McCarthy and his family relocated to Cork, Ireland when he was a child. His father, a keen fox hunter, eventually got him into riding and, like so many of his peers, McCarthy cut his teeth on the Irish pony circuit. In hindsight, he says, the Emerald Isle’s seemingly baked-in recipe for future show jumping greatness was a fundamental building block of his education—providing him with that unique combination of courage and grit that’s become the calling card of Irish riders everywhere.

“Running around [in these pony classes], you fall off a lot. You learn how to fall off, and how to not get hurt,” McCarthy explains.

“We compete on 14-hand ponies—which is a large pony over here—and they jump up to a 1.30m. It’s wild to go back and see it, after being over here for a while, and see how big the jumps are, and how small the ponies are, and how brave the kids are.”

McCarthy may have come by the resilience of his pony days honestly, but the ribbons, he says, were few and far between. “To be honest, I didn’t really do much [international competition as a junior]. I was never really any good growing up.

“I’d jump the odd clear [round] every now and again, but I fell off a lot, and didn’t really win anything until I was in my 20s,” he says.

“I had a pony called Pacman Blue Boy, and he was 22 years of age when I got him. And he was incredible. The one thing that I remember about him is we qualified for Dublin [Horse Show]. There are four qualifiers and I fell off in the first three and then I finally qualified in the very last position in the last qualifier. So we were all thrilled to get there. And then I went to Dublin, fell off again.”

At 16, McCarthy, who was pursuing other sports at the time, opted to take a brief hiatus from horses, but it wouldn’t stick. Two years later, he found his way back to the saddle, and not long after that, his six-week stint at university in the rearview, he got on a plane and headed to the States.

Fortunately, McCarthy found that even as a virtual unknown in North America, there were plenty in the industry willing to lend him a hand.

“I worked for Joie Gatlin in California, and she believed in me quite a bit. [She] put a lot of time into me, and really gave me a lot of structure, which I didn’t have before, and some exposure in the bigger [shows and] classes,” McCarthy explains. “I won my first grand prix with her [on the HITS Desert Circuit] on a horse called Cooper.

“I’ve been here [in the States] for seven years now, and it’s been amazing to me. I’ve gotten a lot of experience, and obviously, I met a lot of incredible people and met a lot of Irish people out here that I did not know existed.”

In addition to his owners at Rock Ridge Farms, McCarthy says he’s grateful to late Irish show jumper Jack Dodds, who helped him land one of his first winter circuit jobs in Wellington, but passed away tragically in 2018 in a car accident at age 25. McCarthy also worked for two years under Darragh Kenny at Oakland Stables, and continues to have a friendly mentor/mentee relationship with “fellow Corkman” and MLSJ’s Spy Coast Spies manager Shane Sweetnam.

“[Shane is] somebody that you can always reach out to and ask advice,” McCarthy says. “He has no problem giving it, and you know you’re going to get the truth off of him and [he asks for] nothing back in return.”

But while Sweetnam may have decades of experience and Olympic bonafides, McCarthy isn’t pretentious about how and where he comes by good information.

“I think you can learn from everybody in the sport; riders, grooms, owners, managers. [I think] it’s important to try and take a little bit from everybody,” he says. “There’s a lot of people that have helped me, and I needed all the help I could get.”

Kingdom for a horse

Every rider knows a good horse on your string is the equivalent of passing ‘Go’ on the Monopoly board: a chance roll that provides not just the possibility of cash winnings, but the ability to propel one’s career forward in record time. For McCarthy, Gotcha is that horse.

“[Gotcha] is very careful. She gives 100 percent [effort] the whole time. She’s not blessed with all the ability or all the scope [in the world], but she makes up for that in her heart. If you could clone her heart, and put it in another horse, I think you’d have an Olympic-style horse,” he says. “ I know her very well. She knows me very well. Nothing really surprises us.”

“I shouldn’t say that,” McCarthy says, reconsidering. “She spun me off a couple of weeks ago!”

Character that she is, Gotcha has earned a reputation for her post-jump antics and required downtime between MLSJ rounds. But her quirks are a more than worthy trade-off for McCarthy, who believes in taking all of the sport’s ups and downs in stride.

“Even the best riders in the world lose more than they win. You have to be okay with that, and you have to deal with the lows as well as the highs when they do come to you, [and] not get too carried away. It’s a very humbling sport.”

Fortunately, if you’re just tuning in, McCarthy, himself, is a pretty humble guy. Though he’s fast becoming a fixture at the upper echelon of the sport, he’s more than frank about who and what got him there. “I appreciate the horses for what they are and [for having the chance to learn] how to win, because it didn’t come naturally to me at all,” he says.

Though even that has its benefits. McCarthy says, the extra work he had to put in to keep up with his peers is now giving him a leg-up in his role as coach.

“I really had to learn everything about the sport [the hard way],” he continued. “Now I have some people that I train, and I like to think that I can really level with them because they’re trying to learn it as well. I can explain [things] pretty well—I like to think, anyway! I think that’s helped me a lot in my coaching side of the business.”

And, if his recent results with Gotcha are any indication, McCarthy’s all-in-good-time success is just getting started. “I had a pretty slow start, and it’s nice that I’m starting to catch up [now],” he says. “I need to keep searching for more horses [for my string], and better horses, and keep on getting better myself.

“I’m definitely not resting on my laurels.”