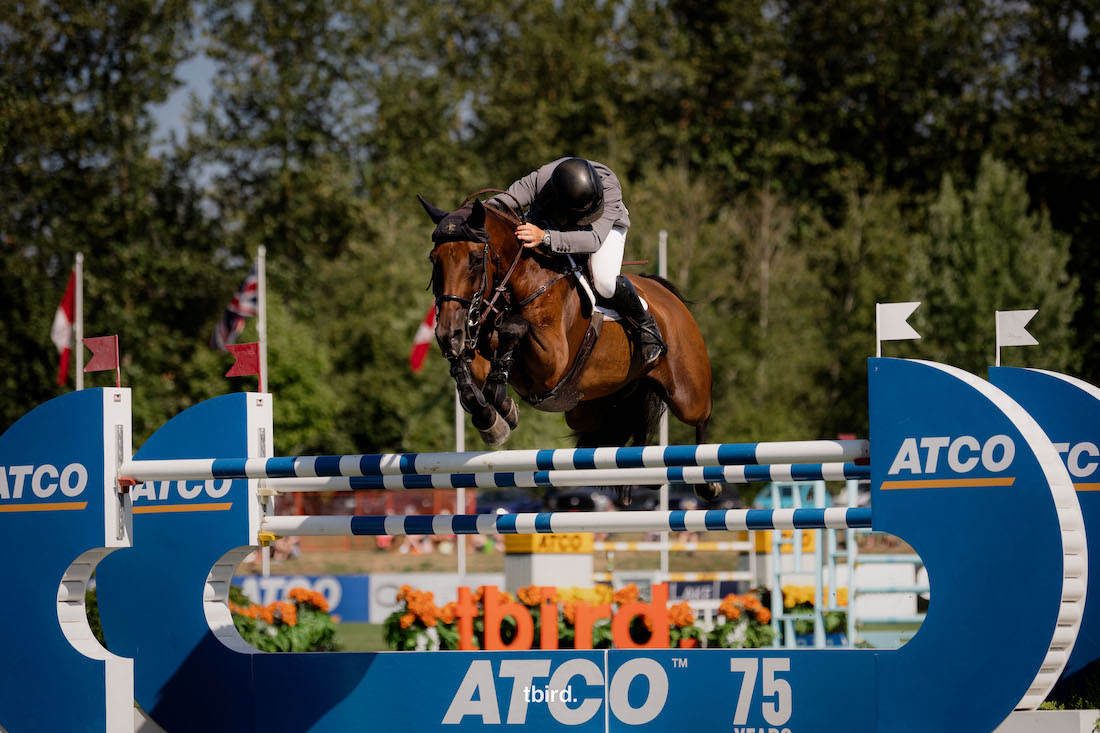 Eliza BJX doesn’t like being told what to do. Luckily for her rider Matthew Sampson (GBR), what she likes to do is win.

They’re definitely in agreement on that much, because on Sunday the pair won the $100,000 CSI3* ATCO Cup Grand Prix 1.50m. It was the second 1.50m class of Eliza’s life after the CSI3* Uryadi’s Village Cup. For Sampson, all he had to do was keep the momentum going, the ATCO Cup being his second win at tbird in the last two weeks.

The Oldenburg mare is also a new ride for Sampson, having been partnered together just over a month now. Yet they’ve quickly become acquainted.

“She’s got a lot of character, she doesn’t like being told what to do. She has her head up a little bit and she just goes in that way. It’s a little bit of an unorthodox style, but that is where she’s most happy and she jumps so well. I just compromise,” explained Sampson.

On Sunday, Sampson’s end of the deal was to give the Anderson Lima (BRA) jump-off a solid effort.

“I thought, ‘It’s not very often you get to be in a Grand Prix at a show like this in the jump-off’. She’s 10-years-old, so she’s old enough to give it a go, and she just rose to it. That’s what good horses do,” said Sampson.

Proving she was all that and then some, Eliza raced against the timers in 40.13 seconds, just ahead of Karrie Rufer (USA) aboard 11-year-old Stern dei Foletti with 41.18. Robert Blanchette (IRL) and 11-year-old mare Chardonnay could cheers to third on 42.15 seconds.

Paired together at Spruce Meadows, they had a month off before arriving in Langley. It was just enough time for Sampson and Eliza to figure each other out. Without pressure, but still with a goal in mind.

“She had a month off in between spruce and here, which was great. It is difficult to try and get to know the horses at a show when you’re trying to compete with them. They don’t really get time to get to know you, and vice versa, and to create a bond with trust. I think we’ve really got that now,” said Sampson.

Eliza is a quick study according to Sampson, and the sentiment is backed up by her results. Jumping only the qualifier and the Grand Prix this week, the British rider was confident in her ability to be quick across the ground even if she didn’t have all the experience.

“She’s quite inexperienced at this level. She [jumped] 1.50m on Friday, and we had two mistakes, but she just learns. She’s clever. I know she’s fast because she’s had quite a bit of experience going against the clock. Just not at that height, said Sampson.

While that experience showed in her first moments on course, it didn’t take Eliza long to find her footing.

“In the first round [today], she felt really good but a little inexperienced in places. In the jump-off, she felt amazing.”

Felt amazing and scored that way too, Eliza has her first of what is sure to be more 1.50 Grand Prix wins.