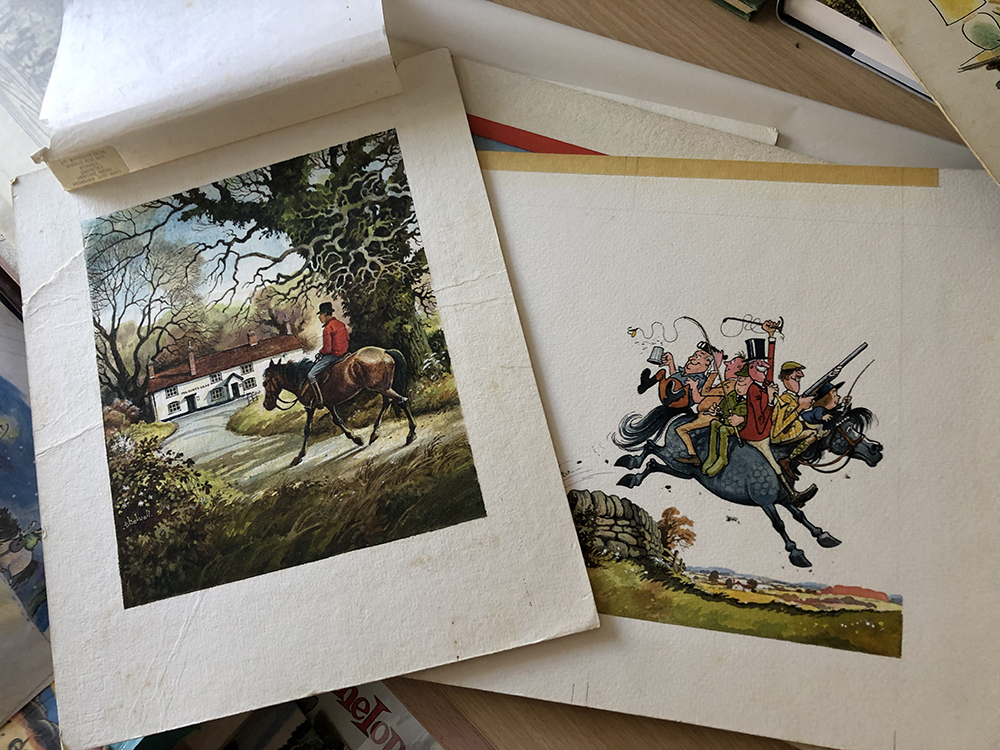 Of all the Airbnbs in the UK, I had to book this one; a cute one-bedroom house with a clothesline.

I knew I was in the county of Hampshire, but that was all I knew. I generally have no clue where exactly I am. I’ve adopted a rather laissez-faire attitude over the last three months and now I just sort of roll along.

My Airbnb host was a lovely lady who had waited patiently for my arrival as I had made a few wrong, curse-inducing turns. She showed me around, skipping past the clothesline which was one of my favourite features.

“What brings you to the area?” She asked. “You’re the third Canadian I’ve had this year.”

And from there I must have prattled on about horses and she seemed genuinely interested.

“Have you ever heard of Thelwell?”

It was an unexpected question as nothing in the house that was located in a quiet neighbourhood suggested a horse person was near.

“I love Thelwell,” I said. “I just wrote an article about Norman Thelwell actually. And the Thelwell people even posted my story on their Facebook page and typed out my name. I’m 50 and so excited about that.”

She smiled as I talked. And the more I went on the broader her smile became.

“Norman Thelwell was my father-in-law,” she said.

There are 67 million people on this small island, and more than 250,000 Airbnbs and I miraculously picked Mrs. Thelwell’s rental. If I had changed one thing about my trip, stayed one extra day somewhere or visited one different town, this may not have happened.

“You’ve met Norman Thelwell?” It was a stupid question; I see that now.

After I asked a barrage of questions, the lady gathered her things and as she walked out the door she turned to me, “I’m going home to make a phone call. I’ll get back to you.” And with that, she was gone.

I’ll get back to you. My mind was awash.

And 20-minutes later she got back to me in the form of a text.

“Call David,” and she left his phone number.

At 2 o’clock the following day I was sitting in David Thelwell’s living room, sipping tea and eating biscuits. David is the son of the late Norman Thelwell. He looked remarkably like his father, and I fear I may have forgotten to whom I was speaking.

David is kind, polite and soft-spoken. Basically the opposite of me. He gave me three hours of his time simply to indulge my childhood memories and grown-up fascination.

Surprisingly, the Thelwell family was not a horsey one. Norman Thelwell drew images of the British lifestyle, which horses/ponies just happened to be a part of. It was when a sketch he had created for Punch magazine in 1953 of a little girl and her pony resonated with the British public that his pony niche was etched.

While my childhood memories center around pictures of naughty ponies and general country life mishaps, David told me his father’s work was much broader than ponies. His detailed artwork also made statements to bring awareness to pollution, social injustice and the British class system, such as it is. For all my Thelwell fandom, I was surprised this was something I hadn’t known, shamefully.

Once I had finished my tea and left the one token cookie so as not to appear piggish, David asked if I wanted to see some of his dad’s work. He took me to his studio where he himself also paints. He turned to a large set of shallow drawers and opened the top one. And in that drawer were hundreds of sketches, some in pencil, others in ink and most of which I recognized.

He set some images on a tabletop. I stared at them in disbelief. How is it that I am so lucky that I am in this house looking at these drawings? Pencil sketches of famous pictures in their infancy.

“You might find this interesting,” David said, holding a coverless book. “My dad would work on the layout of a book in one of these first.” And then he handed it to me. I looked at him to make sure he didn’t regret his decision. It was the prototype, if you will, of Penelope. Some of the images were sketches and some were cutouts of drawings that had previously been published.

“This is the manuscript he sent to the publishers,” he said, setting an 8×10 (or thereabouts) box down on the counter. “And here’s the published book.”

And there, in front of me, I had the original life span of Penelope.

We worked our way through several of the drawers, each holding a countless number of original sketches, completed drawings, and paintings. When we think of Thelwell we think of cartoons, but Normal Thelwell’s true love was painting British landscapes—cottages in the country, longboats on canals, the ocean or whatever else he might happen upon. Even though the paintings are a world away from fat ponies, somehow Thelwell’s style remained, though less cartoonish.

When we reached the last drawer, we came across two pictures wrapped in tissue paper. I’d seen the pictures before in books and on covers. These pictures were wrapped in tissue because they had been sent to a company that would enlarge them to the size of a large wall. They are now murals inside The Duke-On-Test Pub.

The owners of the pub also own Norman Thelwell’s old home and as a tribute to him, these iconic images are displayed within a gentrified old English pub. One sits above the bar and the other, oddly, in the men’s washroom.

I went to the pub the following afternoon, I felt it was the perfect excuse to have a midday . And just as David had said, right above the bar was an enormous mural of a man riding his horse toward a pub called the Duke. He’d picked this image for obvious reasons.

The second image was going to take some engineering since I wasn’t brazen enough to walk into the men’s room. I enlisted the help of a waiter. He was a cute young man who had just been reprimanded by his equally cute young female boss for talking to the customers too long.  He, as expected, was friendly and keen to help. His plan was that he would go in first, make sure the coast was clear and then stand sentry at the door as I took pictures. The plan went without a hitch.

Nobody seems to know why the men’s washroom was a chosen location for a mural. Or why the women’s wasn’t. Such are the mysteries of life.

Though Norman Thelwell was not a rider, a farmer or a golfer, his images lead you to believe he partook in all country pursuits. And this, my dear readers, is due to his research. David showed me to a small metal filing cabinet, maybe 2 feet square. It sat on the floor and appeared to be the very filing cabinet used by his dad, old and dark green or black maybe, army issue perhaps if the army issued such things.

He opened the top left-hand drawer, and it was stuffed full of magazine cuttings portraying images of British life. All the images were carefully placed in their appropriate sections, horses, cats, dogs and cattle; farming, fox hunting, sailing, golfing, camping and fishing; manor houses, narrowboats, canals and cathedrals.I looked through the horse and cat sections, David unfazed by my curiosity.

The images, most of which were black and white, had come from magazines.

“Did your dad have a researcher?” I assumed someone so well-established would have a person to do this sort of thing.

“No. He cut out the pictures himself.”

“Most evenings he would sit in front of the TV with a pair of scissors and a stack of magazines and work his way through them.”

Dedication, all in the name of art and accuracy. What a fantastic insight.

Norman Thelwell along with his oeuvre of paintings and drawings also had 34 books published. He was prolific and nothing motivates me more than feeling like an underachiever when learning about someone’s dedication and ability to produce. Though most of his books covered dastardly pony antics and country life, he also wrote Wrestling with a Pencil: The Life of a Freelance Artist and A Plank Bridge by a Pool. The latter title I thought was strange, and my facial expression must have conveyed that to David as I held his copy of the book.

“Apparently, that is what the name Thelwell means. A plank bridge by a pool.”

Feeling as though I might be at risk of overstaying my welcome, I turned down the offer of a second cup of tea and thanked David profusely for taking the time to visit with me. Those three hours were magical, and my Thelwell experience trumps every wonderful thing I have seen and done on this trip of mine, even Shetland.

It’s unclear what I’ve done to have deserved such an amazing and unfathomable opportunity, but I am forever thankful and grateful. I will never forget it, not one second of it.

May Thelwell live on in our memories, tack stores and bookshelves.