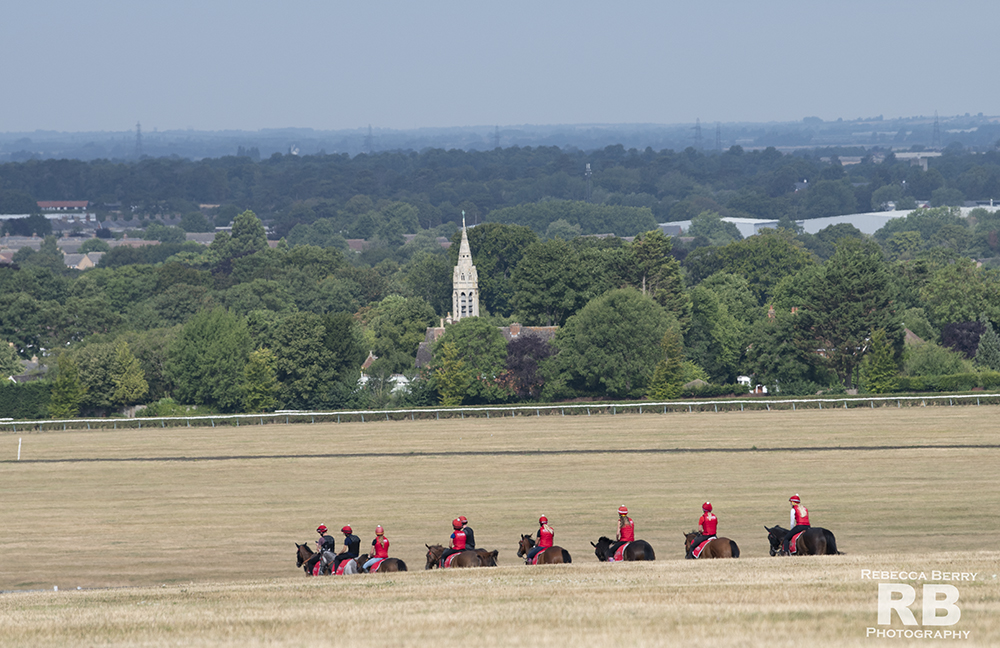 A million Christmases ago my mom gave me a Newmarket quarter sheet. It was my Santa present, which is to say the best present of the day.

It was beautiful. Wool, of course, in the classic gold colour with the black and red stripes. So precious was the sheet, I didn’t often use it on my horses for fear of wrecking it. I still have it and it sits smartly on a bench in my house.

Newmarket is a place I have always known about. Though in my mind, it was one of those magical places I could only ever dream about visiting. My mom and I often talked about it, “Can you imagine…”, “Wouldn’t it be fabulous…”, “One day…” And now here I am on the brink of living out one of the sentences. I am, as I write this, sitting very near Newmarket.

It is difficult when booking an Airbnb to know exactly where a place is, despite the map it still feels like a game of chance. There is only so much research I am willing to do when looking for a place these days, as this is the 20th rental of my trip. I’ve gotten to the point where I’m willing to deal with whatever awaits me when I arrive.

This place was the first I found on the website and the only place I considered. It looked nice, offered a washing machine and was close to the horses without costing a fortune. But more than that is the name of the area in which it’s located, Fornham St. Genevieve.

Genevieve was my mom’s name. It was one of the decisions in life, however small, that instantly felt right. Whether you’re a believer or a non-believer of such things, you cannot deny the coincidence, or duality as my cousin likes to call it. A little sign from the ether that says, “This is the right choice. You’re going in the correct direction.”

And so, I booked it knowing my mom was with me, if not in spirit, then at least in name. I know she’d be thrilled that I am here and about to witness the magic that is Newmarket.

Newmarket is magic, albeit a little confusing.

Unlike my time in Middleham, I knew horses would be everywhere. Still, that knowledge didn’t quell my excitement the first time I had to stop the car to allow 20 horses to cross the street in front of me. The riders waved and said thank you, and I waved back with an excitement level that likely breached my age group.

My destination for the morning was the Warren Hill Gallops and no amount of pictures, articles or conversations could have prepared me for what I was about to see.

I rounded the corner at The Shoes Pub and headed down a short road. There is a racing stable here, the road inconveniently slicing it in two. A man stood on the sidewalk with a red lead shank over his shoulder holding his hand up to stop traffic. A few horses and riders crossed, and the man waved with a grateful smile as he followed them toward the other side of the property.

I drove a few more feet and came to what can only be described as a horse thoroughfare. An astonishing number of horses, probably 50 or so, passed in front of me from the left and the right. Most were surprisingly well behaved, confident in their job and the general routine, but there was one, there’s always one, that felt going sideways was the best way forward.

I watched in delight with my foot firmly on the break and the car in neutral. The last thing I wanted was for my foot to slip off the clutch and then lurch forward with a jerk, no doubt unseating a rider.

When the road cleared, I moved into first gear, comfortable with my crawling pace. Second gear felt reckless, though I did eventually get there when I noticed the line of cars behind me. There were vast heaths on both sides, the grass now brown due to the recent heat wave and lack of rain. The ground on either side made a slow climb skyward and the horses and riders were backlit against the pale horizon.

Streams of horses flew up the two gallops to my right. I’d seen pictures of Warren Hill before, and it felt as though I was looking at a monument rather than some white railings on a hill. Dozens upon dozens of horses walked down the hill, alongside the road but safely behind a post and rail fence.

The scene on the left was similar, though with fewer horses and fewer white railings.

I parked my car and grabbed my camera and then like a kid in a candy store, froze. I was unsure what to take pictures of first, there were too many options, too many horses going in too many directions.

The scene was brilliant, the atmosphere was magic and I was, as I always am in places like this, at my happiest.

But it’s a little confusing

Confusion is unpleasant, especially when driving on the left side of the road with horses; very expensive horses, everywhere. I suspect it would take months to understand the layout of the gallops and even then, you would need help.

There are 2,500 acres of maintained training grounds with 64 miles of gallops. The 50 miles of turf gallops are imperceptible as they are marked with little white circles that stand only a few inches high. The 14 miles of artificial gallops are generally lined with white railings, but not always, and often all the above are hidden behind 10-foot-high hedges.

I drove around after lunch when the horses were done for the day and found more training grounds, but it was unclear as to whether a regular shmoe like myself was allowed to linger along the fence line. Some of the gallops felt secreted away.

Horses also seem to appear and disappear in equal measure around corners and from behind hedges. There is a network of pathways for the horses that not only lead from the stables to the gallops but also join the two training areas that are divided by the town itself.

I eventually found a map online of the area that shows all the gallops, racing stables and stud farms. It’s fun to look at but did little to help me get anywhere. Travelling alone has its merits, but it also has its shortcomings. Trying to figure out where I am going is definitely a shortcoming.

There are two racecourses here side by side: the Rowley Mile and the July Course. The only thing separating them is the 6th (or 7th) century Devil’s Dyke that the East Anglian Saxons likely built as a way to keep out their neighbours, the Britons. Or so the information board said.

I took a walk down a small portion of the 12km (7.5 miles) dyke for several reasons, but the least of which was exercise. I needed a good vantage point to see the two racecourses, I wanted to find more gallops and see more horses. And also, because it is super old.

If you’re a jumper or an eventer, your first thought upon seeing this dyke would be, dear lord I’m glad our Devil’s Dyke doesn’t look like this. This dyke, which I will now deem as the original given its age, is diametrically opposing to ours. It is 30 feet high with the ground falling away sharply on either side and stopping abruptly at the bottom of an almighty ditch before once again rising to ground level. It is a beast and best tackled on foot, in my opinion.

The town of Newmarket

I haven’t spent much time in the town itself, other than driving around in a haze of confusion. It’s a cute town as most are in the UK, full of history, pubs and little shops. But you’ll also find the National Horseracing Museum and the Jockey Club Headquarters. The garbage cans are even adorned with golden racehorses and the tree planters have gold daisies on them made from horseshoes.

Newmarket is all about horses, no more, no less.

If horses are what you love, no matter your discipline, this is the place to visit. And might I suggest that you book a place to stay in the area of Fornham St. Genevieve, you’ll be welcome there, I just know it.