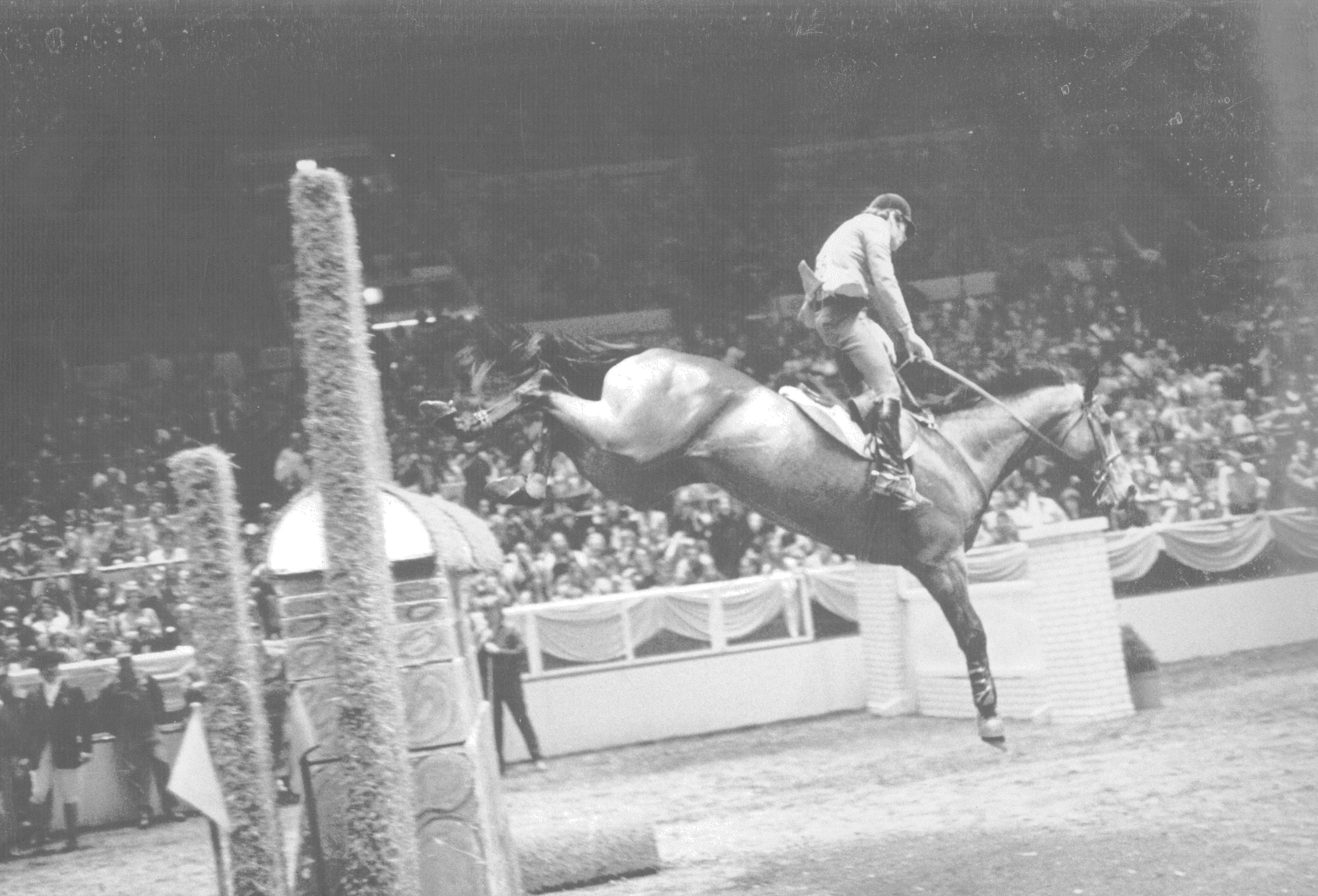 Sympatico, a veteran of the 1976 Olympics and 1978 World Championships, is best known for his show record in the Puissance.

Sired by The Hammer out of a Black Gang mare, Sympatico was in training as a timber horse when purchased as a 3-year-old by the Edelmans’ Alligator Farms in Connecticut out of a field in Upperville, VA. Sally Edelman showed the 17.1h, bay, Thoroughbred gelding sparingly as an equitation horse and junior hunter before starting the 6-year-old on the A-circuit as a junior jumper in 1971 while riding out of Carl Knee’s Rock Bottom Farm.

She went on to show him in the Preliminary and Intermediate Jumper divisions where he quickly won enough that he was qualified to move up to the Open Jumpers. Through that entire time, Sally was the only one to ride and show him. She also showed him in the Amateur Jumper division with great success.

Sympatico moved up to the Open division with Anthony D’Ambrosia in 1972 and the duo claimed a second-place finish in the Cleveland Grand Prix, a fourth in the Grand Prix of Los Angeles, a win in the Orange Coast Grand Prix in California, and four wins at the National Horse Show in Madison Square Garden. His record-setting career as a Puissance horse began in 1973 when he won the Puissance at the National Horse Show with a height of 7′ 4″.

The next year he won the Puissance at the Washington International Horse Show at 7’1″ and the Grand Prix at Hamilton (Ontario), while placing second in the American Show Jumping Championships and Grand Prix of Toronto and third in the American Gold Cup.

Wins the following year at Washington and New York, as well as in the Grand Prix at Hornby (Ontario), led to his sale to Samson Farms of Canada and new success as a team horse for Canada. In 1976, Canadian Jim Day rode him to Grand Prix wins at Aurora (Ontario) and Toronto, and he won three classes at the Royal Winter Fair including the Puissance, in which he cleared 7’2″. His 1976 season was highlighted by his selection to the Canadian team for the Montreal Olympics where he led the team to a fifth-place finish.

At the end of 1977, he was purchased by Canadian rider Terry Leibel who teamed with him to win the Grand Prix of Florida in their first start together and also the Grand Prix of Rotterdam during 1978, a year that saw them help Canada to a fourth-place finish in the World Championships at Aachen.