Home > Blog > Racing > Can the Filly Finish First in The Preakness? 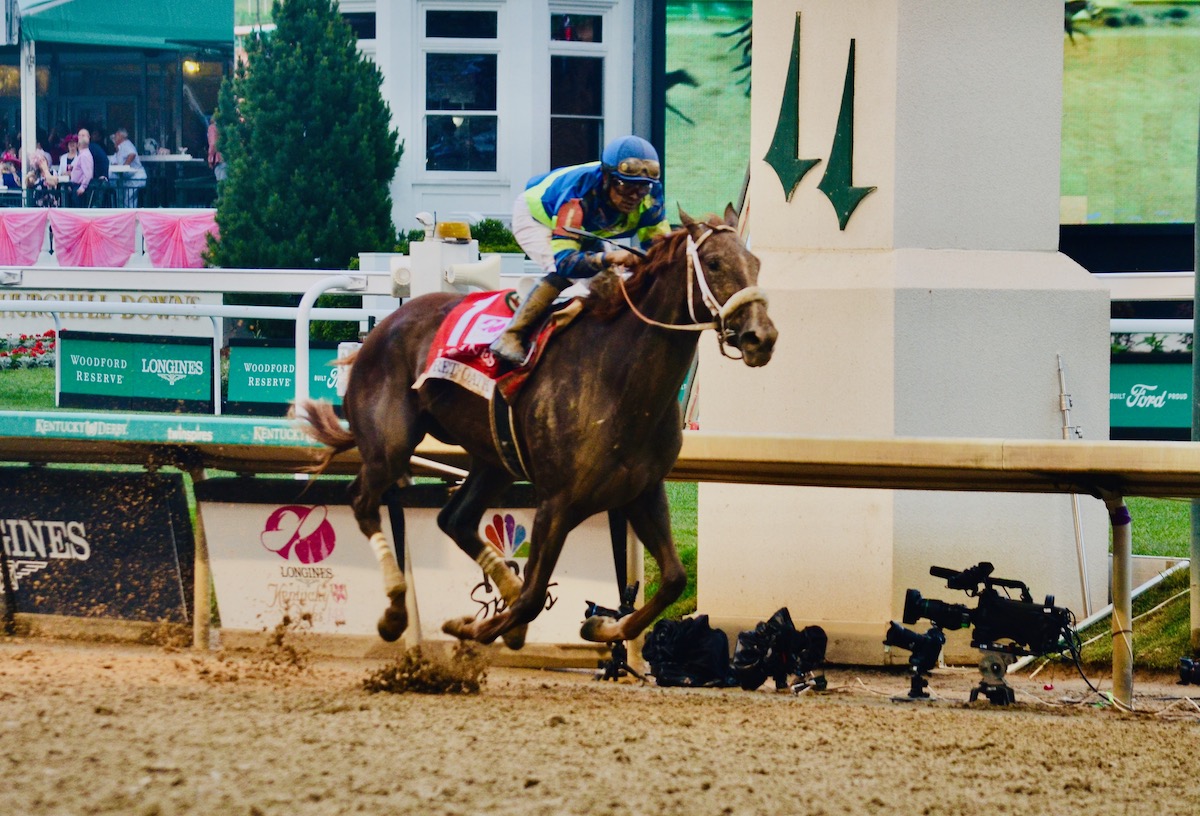 It is already an unusual year in American racing’s Triple Crown—the Kentucky Derby, the Preakness Stakes and the Belmont Stakes (all G1s).

Firstly, there was no Bob Baffert horse entered in the Kentucky Derby owing to the six-time Derby winner’s two-year suspension from all Churchill Downs properties.

Secondly, he wasn’t missed, because thirdly, 80-1 longshot Rich Strike earned post 20 due to the scratch of Ethereal Road just minutes before the field was made final Friday morning before the race.

The unknown also-eligible would overcome a late entry, the farthest outside gate, and a trio of Derby inexperience (it was a Derby debut for the owner, jockey and horse) to win The Run for the Roses at the second longest odds in over a century. It’s a feat that drove racing fans—and probably Derby organizers given recent controversial Derbys—over the moon with delight.

But this Triple Crown year was made even more unusual when connections for Rich Strike decided—for only the third time in the last decade, and only the 11th time in history—to pass on competing in Saturday’s Preakness Stakes at Pimlico in Baltimore, MD, and instead prepare for the June 11 Belmont Stakes.

Mandaloun’s connections passed on the Preakness last year to give the horse rest. But that was before the then runner-up was finally declared the official 2021 Derby winner last month due to the disqualification of first-place finisher, the late Medina Spirit.

Two years before, Country House, declared the Derby winner because of the disqualification of first-place finisher Maximum Security for interference, also skipped the Preakness, reportedly because of a minor injury. He never raced again.

This year’s Derby-favored runner-up Epicenter will be at Pimlico, as will Derby fourth-place finisher Simplification, 14th-place runner (perhaps not so) Happy Jack, and five fresh colt challengers. Still, that might have made this Preakness less exciting save for a seventh challenger to favored Epicenter, the filly Secret Oath.

Legendary trainer D. Wayne Lukas is still a frequent headline in racing. This year, he handed the eventual Derby winner his gate when he decided Ethereal Road was not Derby ready. But Lukas was already a headline when his trainee, Briland Farm homebred Secret Oath, won the Kentucky Oaks (G1), the three-year-old filly counterpart to the Derby, the day before the Run for the Roses.

Even at 86 years of age, Lukas remains an innovator, this time deciding his Oaks winner was ready to give him a chance at a seventh Preakness win against eight male challengers including Epicenter, also the 6-5 favorite this Preakness.

None of Lukas’ six Preakness winners were fillies, but he is one of only three trainers to win the Kentucky Derby with a filly, Winning Colors (1988), so one could argue his chances with this daughter of the late Arrogate are good, particularly in a smaller field lacking the Derby winner and third-place finisher, Zandon.

Good enough that she has been made the 9-2 third choice behind the favorite and trainer Chad Brown’s 7-2 entry, Early Voting, holder of the highest speed figure in the field.

Lukas may have explained his reasoning for wanting to enter Secret Oath in the Preakness during the press conference after her win over 5-2 Oaks’ favorite Nest and 4-1 second choice Echo Zulu, saying “The favorite wins only a third of the time.”

Still, Lukas knows he is also up against history.

During the Preakness’ early years and in a shortened span of only 22 years, four fillies won the blanket of Black-Eyed Susans.

Florcarline was the first in 1903. She later was sent to France as a broodmare where she foaled several stakes winners.

The 1906 Preakness wasn’t held at Pimlico, rather on Coney Island, NY at the oddly named Gravesend Race Track. There, Whimsical, perhaps appropriately named for a racehorse at an amusement park, won gate to wire by four lengths. She too was subsequently retired as a broodmare.

Rhine Maiden claimed the Preakness crown in 1915, ironically the same year that Regret became the first filly to win the Kentucky Derby. The two would not face each other in that year’s Preakness—remember, what we now call racing’s Triple Crown did not even exist by that name until 1919. (Sir Barton claimed the first Triple Crown.)

In 1924, Nellie Morse became the first filly to win the Preakness in the Triple Crown era. She would go on to a productive career as a broodmare after winning the Kentucky Oaks by the disqualification of Glide Run. At that time, the Oaks was run after the Preakness.

It would be 85 years before another filly would win the second jewel in American racing’s Triple Crown.

The good news is that two fillies, one with an exceptional but shortened career, the second enjoying an exceptional year, won the Preakness in a recent span of only 11 years.

Rachel Alexandra was the Eclipse Award-winning Horse of the Year and Champion Filly in 2009. That year, the daughter of Medaglia d’Oro won races in Arkansas, Kentucky, Louisiana, Maryland, New Jersey and New York. She won that year’s Kentucky Oaks by a stunning 20 lengths.

Three of those victories were against males including the prestigious Woodward Stakes (G1) against older males at Saratoga. Her Preakness win came after she was purchased for a reported $10 million by Jess Jackson, who had campaigned Curlin, and subsequently entered her in the winning Preakness.

She would return the following the year to win the Lady’s Secret Stakes and the Fleur de Lis Handicap (G2), but was clearly not the same horse, finishing runner-up in the New Orleans Ladies Stakes, the La Troienne Stakes (G2) and the Personal Ensign (G1), Aug. 29, her last race, won by Persistently. She was retired to Jackson’s Stonestreet, KY Farm.

Swiss Skydiver was one of the few cheerful sports notes in an otherwise grim 2020, during the first wave of COVID.

The daughter of Daredevil (out of Expo’s Gold by Johannesburg) scored five of her six graded wins that year including the Alabama Stakes (G1) at Saratoga and a memorable stretch run battle and victory over Kentucky Derby runner-up and subsequent Breeders’ Cup Classic (G1) winner, Authentic, in that year’s COVID-delayed Preakness.

The 2020 Eclipse Award-winning Champion Three-Year-Old Filly would falter in that year’s Breeders’ Cup Distaff. In 2021, she would win the Beholder Mile (G1) at Saratoga before a disappointing third-place finish in that year’s Apple Blossom Stakes (G1) at Oaklawn Park. She was subsequently retired.

Like the two recent Preakness winners preceding her, Secret Oath is having a stellar year. Secret Oath has claimed four of her five victories, three graded, this year. Her career includes another win and a pair of third-place finishes in her eight starts.

To become the seventh filly to win the Preakness, Secret Oath will have to win at 9 1/2 furlongs starting from the 4 post, her longest test.

She will have to overcome a horse that came within a length of winning the Kentucky Derby in Epicenter and another with the highest recorded speed figure in the field, Early Voting.

She will have to overcome the weather, predicted to be a humid, hot afternoon in the upper 90s with a heat index of 105+ degrees Fahrenheit.

And she will have to overcome history.

But we have seen a horse overcome similar obstacles before…