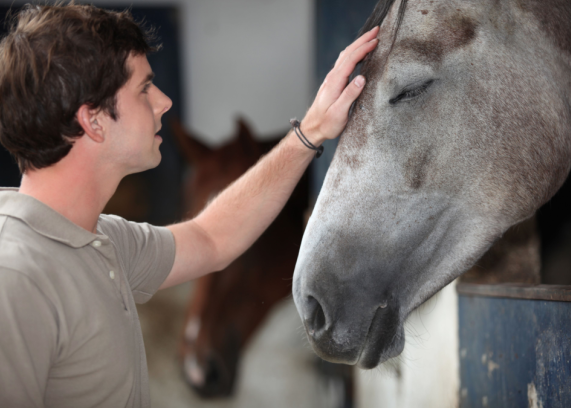 BOSTON, MA—Gas prices are at an all time high, inspiring some out of the garage thinking from Boston city local Joe Metro.

“I refuse to pay $4.75 for a gallon of gas. Buying a horse is the only rational way to save money in these crazy times. I’ve cleared out my storage shed and thrown down some straw. I’m pretty certain a horse will fit,” explained Metro.

Historically, horses were the keystone of transportation, and it wasn’t until the industrial revolution and the invention of the steam engine that they were edged out to the pastures of society. We might not be at the bottom of the earth’s oil barrel quite yet, but we’re at the bottom of our wallets, said Metro. He thinks re-integrating horses into everyday commutes is the obvious choice.

“I pay $225 a month for my car payment and nearly $45 every time I fill the tank. It’s ludicrous. This is the cheapest option.”

When an HN journalist suggested a bicycle, Metro immediately dismissed the idea, stating that physical activity before his long, exhausting day behind the desk was simply unrealistic.

Asked if he’d ever actually ridden a horse before, Metro assured that he rode a pony at the fair when he was a kid once.

“The horse does all the work anyways, it isn’t hard,” he professed.

When asked to clarify whether this was a live pony or a carousel, Metro declined to comment.

“Horse can gallop up to 40 mph,” Metro read aloud from a Wikipedia page, “which means I won’t be late to work. When highway I-95 is backed up for miles I can weave through traffic at high speeds.”

He added that all potential complications in his motorist-to-equestrian evolution have been fully thought out, including what to do with the horse from 9:00 AM to 5:00 PM while he’s in the office.

“I’ll still have my designated parking spot outside of the office and can just leave my horse there while I’m working,” said Metro.

His impressive ability to train a horse to ground tie Wild West style aside, Metro is confident that his work colleagues will have no issue copying this blueprint.

“The other guys in the office might joke about it now, but once they see how much money I save after getting rid of my car and buying a horse we’ll have a whole corporate herd,” he said.

“I have a daughter who rides horses. Why does he think I work so much overtime?” sighed Smart.

Additional expenses such as a bridle, saddle, blacksmith, dentist and large animal veterinarian have been intentionally left out of the final calculation as minor incidental costs. Metro explained that the saddle comes with the horse.

So if gas prices continue to inflate, will we see an equestrian metropolis? Only time will tell.