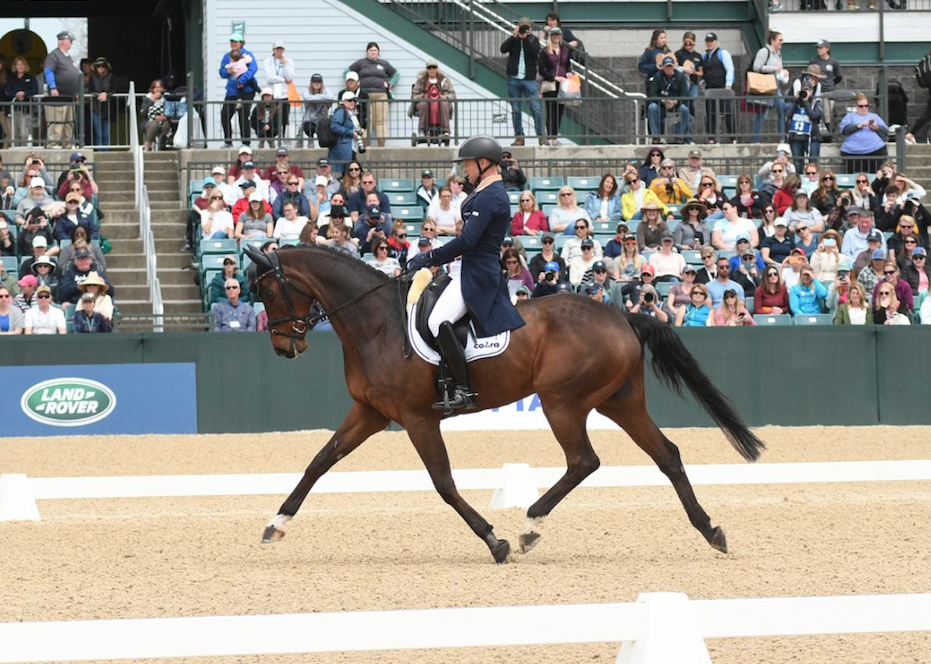 While there’s still two phases left to go, Jung is in the sweet spot after dressage day. Returning to the Kentucky Horse Park for the first time since 2018, he secured the top score of 20.1 with his Tokyo Olympic partner fischerChipmunk FRH.

The 14-year-old Hanoverian gelding took a well deserved eight month break from international competition after finishing eighth individually at the 2020 Olympics. Jung, who competes in both show jumping and eventing, started fisherChipmunk FRH back with some jumping at Gorla Minore before taking a win at Kronenberg CCI3*-S. The LRK3DE is the gelding’s first five-star, and so far they’re in excellent form.

“With fischerChipmunk I have real superstar, and I just enjoy riding (him)…I think that was, from my feeling, the best test ever. He was very powerful on one side, but also really relaxed and in a very good balance. I’m very happy to have him, very thankful to the Fischer crew for this amazing horse and very happy to be here with him for his first (CCI5*-L),” said Jung.

So, his dressage test was near foot perfect, but what does the Grand Slam of Eventing champion think of Saturday’s upcoming cross-country challenge?

“It’s a really nice course, with beautifully built jumps. It’s a super valid track. In the beginning it’s more hilly and twisty, but we have super conditions at the moment,” said Jung of the Derek di Grazia designed course.

Corouet is her first homebred, out of her upper level mare Lilly Corinne and sired Balou Du Rouet.

“I had a fabulous mare that went to the European Championships in 2015, we had already started breeding with her. (Corouet) is our first born, and it was nothing we’d done before but she was a fantastic mare and we thought why not,” Bullimore said.

“I love what he (Balou) produces…(and Corouet’s) got a mighty big attitude in a small package. But, we have continued breeding and have some lovely siblings coming behind him.”

In 2021 they flirted with a top finish; notably placing second in the CSI4*-S at Alnwick and then third in the FEI Eventing European Championships 2021 in Avenches, Switzerland. This week is also Corouet’s five-star debut, so the cross-country field will ask some interesting questions.

“Can I just say I’m on a tiny pony and it looks quite big to me,” laughed Bullimore.

“It’s a beautiful track. All the jumps are out there to go and jump and have a fantastic ride. There are a few lines that take you slightly off the line, places they’re a little offset where you could have a silly mistake, in a an otherwise fantastic ride.”

Rounding out the group is USA’s Buck Davidson and 15-year-old Holsteiner gelding Carlevo, sitting in third with a score of 27.4.

“He’s been very consistent on the first day and he feels to me better than he ever has,” Davidson said, a formidable statement when considering their eight year long partnership.

Davidson has competed this event with Carlevo twice before, so he assess Saturday’s track with experience and knows to have a healthy respect of the challenge ahead.

“Derek is very good at what he does. The fences are beautifully presented, it doesn’t look as big as it did last year…but it’s for sure tricky and the water at the end looks quite difficult. Maybe it doesn’t look as scary, but there is plenty to do and plenty of places to have a stupid, silly mistake,” said Davidson.