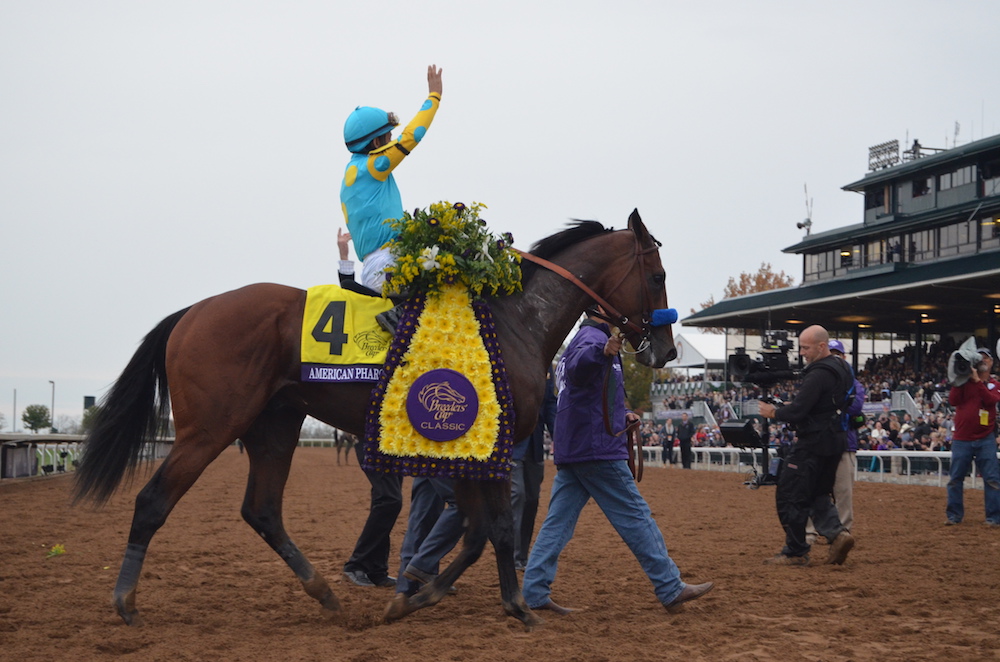 The Whitney (G1) is one of the major contests on the summer racing calendar. This year’s Saturday contest features a small five-horse field dripping with class.

Before that test came a Friday National Museum of Racing and Hall of Fame Induction ceremony featuring 10 new inductees dripping with achievement.

The classy 2020 class of seven had to wait a COVID-delayed year for public recognition of its honors, also allowing time for the Saratoga Springs museum to be updated and improved.

The current Chief Steward of the California Horse Racing Board, McHargue pronounced his selection as “a complete surprise.” He is the 1978 Eclipse Award-winning jockey who garnered a then-record $6,188,353 in single season earnings, $39,609,526 total earnings from 1972–1988. The 1975 Preakness Stakes winning rider (Master Derby) earned 2,553 wins during his career in North America and Europe, including 79 graded stakes. He was 11-time winner of the Sovereign Award, given by the Jockey Club of Canada to outstanding people and horses in Canadian Thoroughbred racing.

Winning trainer of five Breeders’ Cup races and two Triple Crown races in 2019, the Preakness (War of Will) and Belmont Stakes (Sir Winston), Casse is one of North America’s leading trainers. His horses have earned 3,122 wins to date. He was inducted into the Canadian Horse Racing Hall of Fame in 2016. Among his notable trainees are Canadian Horses of the Year Catch A Glimpse, Lexie Lou, Sealy Hill, Uncaptured and Wonder Gadot, along with world-traveling 2015-–2016 Eclipse Award Champion Turf Female Tepin.

“There have been so many horses you would not have heard of that have changed my career and my life,” Casse said on learning of his induction. “One superstar, who time after time did things no one else could do, was Tepin.”

The gelded son of  Wiseman’s Ferry won 19 graded stakes contests between 2010 and 2014. He earned a career record of 31:23-2-0 and amassed $7,552,920 in career earnings. He is the only racehorse in history to win the same three Eclipse Awards in consecutive years (2012–2013): Champion Horse of the Year, Champion Older Male, Champion Male Turf Horse. He was turned out to owner Morton Fink’s Kentucky farm on retirement alongside his brother, Successful Dan.

It took a while for the legendary son of legendary Lexington to trot his deserved way into the Hall of Fame. Homebred in Kentucky by Henry Price McGrath at his McGrathiana Stud, Tom Bowling won 14 of his 17 starts and placed twice, running primarily at New Jersey’s Monmouth Park. He won the 1873 Travers at Jerome Park in the Bronx. In 1872, the New York Times printed in the manner of the era: “…it is reported that when Tom Bowling  ‘shuffles off this mortal coil,’ his stuffed carcass will ornament the porch of McGrathiana, and mark the change of fortune in the career of the genial host, McGrath.” He shuffled off in Feb. 1897.

Three individuals were also inducted under the Museum’s “Pillars of the Turf” program:

Thoroughbred racing is not without its distaff Hall of Fame stars, horse and human. Chandler, who passed away Apr. 6, 2021 at age 95, lived to learn she would be recognized as being among them. Lexington born and bred, she established Mill Ridge Farm. She bred Sir Ivor, winner of major races in France (Grand Criterium), England (2000 Guineas, Epsom Derby), Ireland (National Stakes) and the U.S. (Washington D.C. International). She was accorded the Eclipse Award of Merit in 2009.

Also a lifelong Lexington resident, Daingerfield was referred to as “the dean of North American racing officials” in his 1993 obituary. Initially training to be a lawyer, he chose instead to return to his bluegrass roots and become a horseman. He took out a trainer’s license in 1934 and enjoyed moderate success, notably with the horse George Gains, a five-time stakes winner in 1947–1948. He famously authored a 1942 book entitled “Training for fun and profit (maybe).”  He began his notable career as a steward in 1948 and would serve in that capacity at upwards of 20 racetracks. At the time of his passing, The Bloodhorse lauded him for traits of “integrity, dignity and commitment.”

Born to a prominent Philadelphia family, both his father and mother perished as passengers aboard the RMS Titanic in Apr. 1912. He would go on to become a successful businessman and horseman in his own right. His best-known homebred, Jaipur (19:10-6-0), was the 1962 Champion U.S. colt and winner of that year’s Travers Stakes. Widener is one of only five individuals designated as “Exemplars of Racing” by the National Museum of Racing and Hall of Fame. The George D. Widener Hospital for Large Animals at the University of Pennsylvania’s famed New Bolton Center is named in his honor.

In journalism, this is known as “burying the lede.”

The son of Pioneer of the Nile, out of Littleprincessemma by Yankee Gentleman, holds a treasured place in the hearts of Thoroughbred racing lovers. He was the horse who broke the 37-year Triple Crown curse in 2015, winning all three G1 contests. He would go on to capture the Breeders’ Cup Classic (G1) that same year at Keeneland, the so-called “Grand Slam.” He was saddled by Bob Baffert and piloted by Victor Espinoza to an 11:9-1-0 record.

His “Grand Slam” aside, he garnered five other graded victories, four G1, and totaled $8,650,300 in career earnings. His only significant loss came by a head at the hooves of Keen Ice in the 2015 Travers Stakes. He was the Eclipse Award-winning Two-Year-Old Colt and both Eclipse Award-winning Three-Year-Old Colt and Horse of the Year in 2015. He currently stands at Kentucky’s Ashford Stud.

Pletcher’s first-ballot induction seems almost homegrown since many of his most notable victories took place just across the street at The Spa. Jersey Girl put Pletcher on the radar with a G1 win in the Test Stakes. More Than Ready was more than ready, romping to a 10-length win in the G2 Sanford Stakes the following year. The two-time Kentucky Derby-winning trainer (Super Saver, 2010; Always Dreaming, 2017) has been dominant at Saratoga where he has collected 14 leading trainer titles and 36 G1 victories among 91 graded wins.

Currently ranked eighth all time among Thoroughbred trainers, Pletcher has amassed 5,118 wins, including 166 G1 and 708 total graded stakes victories. His horses’ career earnings now total $405,791,977, $50 million more than any sports trainer in history. The Dallas native is a seven-times Eclipse Award-winning Trainer, four times in consecutive years (2004–2007). Mentored by fellow Hall of Fame Trainer D. Wayne Lukas, Pletcher left the security of the Lukas barn to set out on his own. “You never know for sure how it will turn out, but being a trainer was all I ever wanted to do since I was a kid.”

It turned out okay.

The 13-time Champion Steeplechase trainer Jack Fisher has been a dominant force in the sport for two decades. Beginning in 2004, his horses have led the earnings list eight times. The Pennsylvania native first led trainers in 2003 and has since led the winner’s list 12 times. He has ranked among the top five in both the National Steeplechase Association wins and earnings for each of the past 20 years. His trainees won 593 steeplechase events through May 4, 2021. His purse earnings of $17.8 million rank behind only Hall of Fame trainer Jonathan Sheppard.

You can see the full induction ceremony here: www.racingmuseum.org.