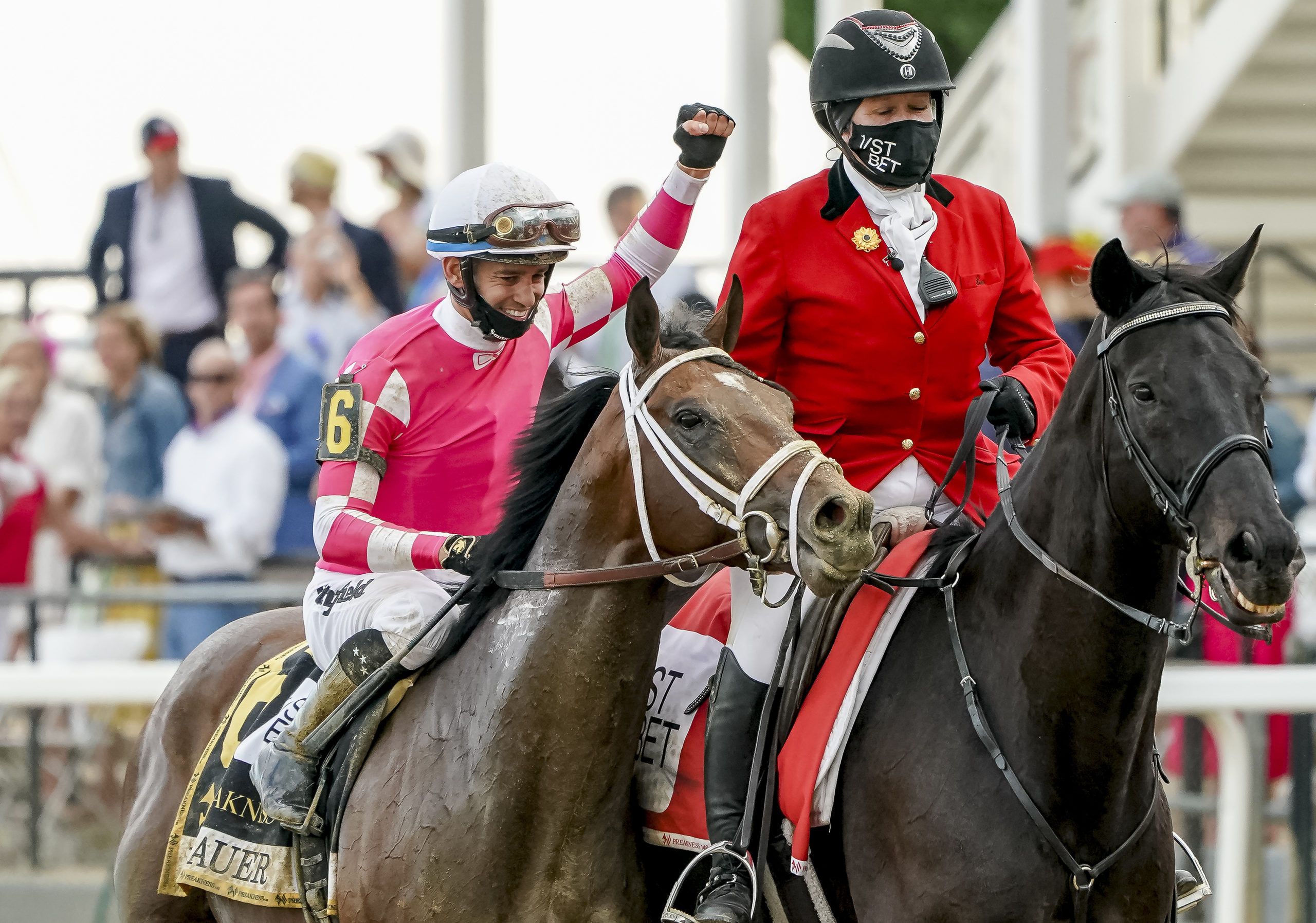 So much of the chatter leading up to Preakness 146 at Baltimore’s Pimlico Saturday focused on the big trainer names in racing: Asmussen, Baffert, Lukas, Pletcher.

But a little-regarded horse deflected that attention onto a “little-guy” trainer when longshot Rombauer stormed through the stretch to a clear-length’s win for smaller-barn trainer Michael McCarthy and his team to overtake Midnight Bourbon, to upset favorite current Kentucky Derby winner Medina Spirit and to snare victory in Preakness 146.

“Stunned,” was how winning the trainer McCarthy described his reaction to winning the second jewel in America’s Triple Crown with somewhat lowly regarded 11-1 upset winning Rombauer.

“I thought the horse would run well. The horse had been touting himself all week. His last two works were very, very good.”

Bred and owned by John and Diane Fradkin, a son of Twirling Candy (out of Cashmere by Cowboy Cal, with respected Candy Ride as his grandsire), Rombauer’s record could not hint at what was in store on this day.

He won the second American Pharaoh Stakes (G1) at Saratoga at two, but was only third in the Blue Grass Stakes (G2) after seven starts, compiling a 2-1-1 record until his Preakness victory.

Ironically, it was the COVID-19 pandemic that in part led to Rombauer’s Preakness glory.

“We intend to sell all our horses,” explained Fradkin. “This horse was aimed at the two-year-old sale in Ocala FL. [Agent] Eddie Woods said he didn’t have confidence the sale was going to come off [because of the pandemic] and this was in March. He suggested, ‘Maybe you should just run this one, have him win early at the track and sell him at the track.’ So that’s what we did.”

“I thought after that race, there would be some big offers,” reasoned Fradkin. “But there weren’t any and part of the reason was his time in that race was a really poor 1:38.3. The initial offer was $48k and nobody sells a horse who has won big for that.

…and the first reports weren’t positive. I heard he had no speed.”

Had another offer been better, the horse would likely have been sold.

But even as pandemic fate played a role in the horse’s fate so, too, did a…timepiece.

“We found out two weeks later the times at Del Mar were off [after installing a new timing system],” continued Fradkin. “That was another lucky break.”

Fate, or luck if you will, is often the confluence of timing and opportunity. And so it was that the Preakness provided the right opportunity at the correct time for the Fradkins, trainer McCarthy and their under-the-radar horse.

When and where to run Rombauer became the subject of a “conversation” between the owners and trainer McCarthy, a not uncommon event in plotting a racehorse’s career.

McCarthy confirmed he was “bullish” on running in the Kentucky Derby:

“I thought it would be over a track he would like,” explained McCarthy. “Usually on Derby day, the Churchill track is hard and fast, and I think that’s what this horse has been wanting all along.”

“We had a pretty heated discussion about that, let’s leave it at that,” said Fradkin. “I can understand why Michael wanted to run [in the Derby], but I think he can understand why I didn’t want to run. I think Michael and I are a really good team.

“There’s going to be some clash at times because I come at it from a total handicapping angle—I’m not a horseman. Michael’s a consummate horseman. He’s focused on the horses and getting them to be their best. Where we disagree is usually just a handicapping thing.”

“The Fradkins have a small breeding operation and they’re passionate about it. They make informed decisions, to say the least. As John told me one time ‘I have a lot more time to study this stuff than you do.’ He was right.”

Said a reflective McCarthy: “The Kentucky Derby obviously is the greatest two minutes in sports. Today, I’m not so sure how long it took us to get around there, but it was the greatest. We probably would have done the same thing earlier, but I’m glad we got it done today.”

The “discussion” between owner and trainer may not have ended given the approach of the June 5 Belmont Stakes, the American Triple Crown’s final jewel.

Oh, and then there was the race itself.

Current Derby-winning favorite Medina Spirit did as expected, racing out into the lead at the start. He was engaged by Japanese invader France Go de Ina in the backstretch. But it was second choice Midnight Bourbon snaring the lead around the far turn and into the stretch.

That’s when Rombauer turned on the afterburners.

“When he wheeled out coming to the 3/16th pole, head of the lane, I started to get excited,” said McCarthy. “When he hit the front [overtaking Midnight Bourbon], I don’t think I said a word. I just kind of watched the horse and the rhythm, him and [jockey] Flavien.”

“It was a lot different in the Derby, but I’m very proud of both races,” said the rider tersely, ending any controversial discussion.

Rombauer was noticeably anxious approaching the gate, help settling him was something for which Prat would thank his pony rider after the race.

“Once we got away from the grandstand and from the noise, he relaxed a lot better,” recalled the rider. “He was fine in the gate, so I figured he’d be fine.”

Recalling this was the longest race in his ride’s career, Prat said he was unconcerned. “I never really thought about the distance. My only point was to get him to break [well] and relax and then try to improve our position from there.”

Which he obviously did with victorious results.

“The whole card for this horse is his stamina and his smarts,” said McCarthy. “He has both of those. He has no quit in him. All he knows to do is just run and he lays it down every time. He’s made me look good.”

The inevitable question of what was next for the 2021 Preakness winner and whether he would be in the gate for the June 5 Belmont Stakes, American racing’s final jewel, seemed to scratch at the existing itch between owner and trainer.

McCarthy indicated his winner would be a likely starter in the Belmont:

“You’d have to think so. We’ll see how he comes out of this. We’ll take a good look at him tomorrow and go from there.”

“I believe in running him in the easier spots,” said Fradkin. “I got lucky today.”

Owner and trainer will turn the page and hopefully land on the same one.

McCarthy was a new trainer, in business less than a year, when he received “a referral from someone” (he doesn’t recall who) and a resulting phone call from the Fradkins. “I’m just glad they looked me up, and glad I answered the phone,” the trainer recalls with a laugh.

McCarthy is regarded as a “little guy” trainer, one with a smaller barn (#59 at Santa Anita).

Reflecting on their place in racing, he mused:

“That’s what our game is built on. There’s so much good that goes into getting to the races, let alone a race like the Preakness. There are trainers who have a handful of horses who are just as good as those suited to train hundreds of horses.

“You never know where a good horse is going to come from. I’m glad this one landed up in our lap. I don’t think the journey is over. We’ll see where it takes us.”

Concluded owner Fradkin: “As with any relationship, it’s going to evolve. We have a good relationship and we’re not done yet. That horse is going to do some more good, and I think [Rombauer] will be pretty darn good on turf.”