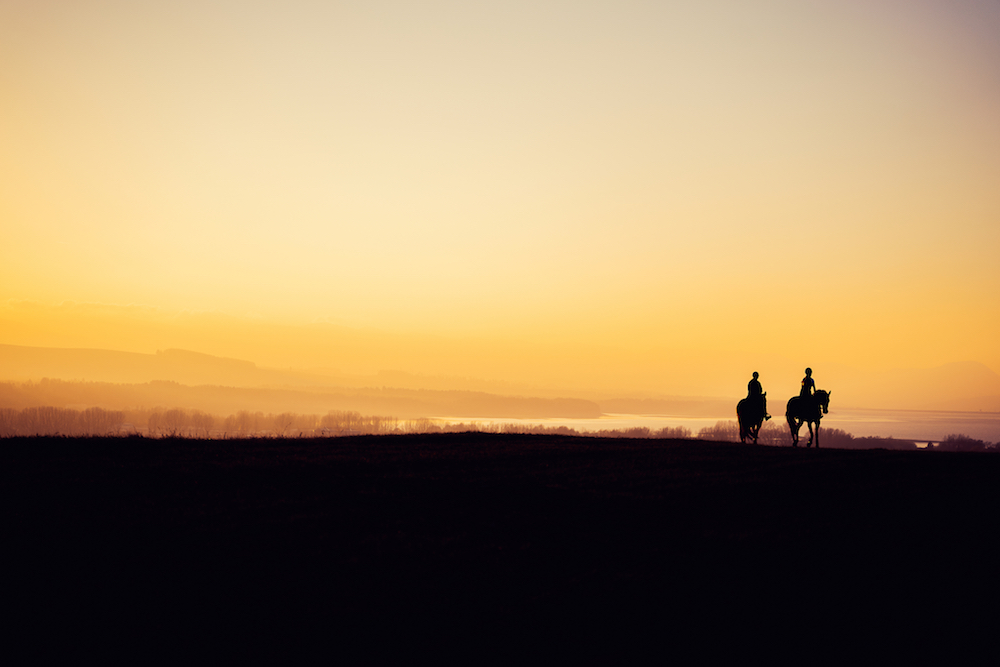 One of the benefits of being a >shudder< senior citizen in the horse world is having much more clarity to see the big picture.

Or, at very least, to see things from a different perspective: the perspective of the rear view mirror.

It’s much easier to see the orderly plan of life from this perspective than when we’re mired in the uncertainty of a situation that is not going the way we had planned.

One of the first challenges that I experienced in my foray into the horse world at middle-age occurred about a year after I sheepishly entered a barn of beautiful horses and accomplished riders and requested entry into their very foreign world. Incredibly (to me), I was welcomed with open arms and supported every step of the way.

Then one day, I was told that the farm was being sold and would no longer be a horse facility. The owners were moving far away, and the boarders would be splitting up and relocating to various other barns. My “barn family” was dissolving. I felt as if my newly established “horse life” was over.

I had no way of knowing then that my horse “career” had hardly begun.

Desperate for contact with horses, I jumped at every opportunity that was presented to me. I volunteered at a therapeutic riding program and made acquaintances that became lifelong friends. The trainer who took over the horse show operation from my old barn was a local legend and I was intimidated to pursue my riding education under his direction. But he actually approached me, took me on as a student, showed me a level of respect I would never have believed I was worthy of, and brought me to a level I had only fantasized about.

Some time later, after I had established my own barn and horses and had put in some years as a horse show dad, my daughter went off to college and I started my own show career in jumpers and local level eventing. We were in our move-up year in eventing when my brave and talented partner DannyBoy was injured and required surgery on his hind leg. I felt defeated, and cheated.

I had an off-the-track-Thoroughbred mare, Lola, in the barn. She had just become sound after a long rehab from a racing injury. I resigned myself to stepping away from the excitement of competition and into the perceived tedium of turning her into a riding horse.

Looking back, it was the most fortunate thing that could have happened for my riding. DannyBoy had been happy for me to sit back, point him in the right direction and let him go. I had become accustomed to his work ethic and take-charge attitude. Lola, while not unsafe or uncooperative, demanded a precise ride 100% of the time in order to succeed in whatever was attempted.

I now like to say that DannyBoy got me the ribbons but Lola made me a rider. She ultimately gifted me with the bonding experience that some say is only achievable between a rider and a mare.

The most important thing that has happened in my adult life was becoming a first-time parent at age 50 to a young niece whose mother passed away at a young age.

My wife and I took on the responsibility gladly, if (on my part) a little fearfully. I had no reason to think I had what it would take to be a parent to a young person whose world had just been crushed. And, if I’m being completely honest, I was scared of the financial implications of being relegated to a single-income family after having just heavily invested in buying and constructing a horse property and facilities as a two-income team.

Of course, this was just another example of the universe conspiring to give us exactly what we needed.

I found that, even though my early attempts at parenting were awkward and ill-conceived, I was actually born to be a parent. Now, almost 20 years later, we made it through emotionally and financially, and I am privileged to have an awesome partner in my equestrian pursuits: a daughter who has surpassed me in the horse world in every way possible, yet who depends on me as I do her, and who has a career where she gets to employ her education and experience as an equestrian professional.

I have eventually become grateful for most everything that was once viewed as a setback. I now seem to be approaching the stage where I can skip the intermediate step of feeling sorry for myself and go directly to gratitude, confident that that is where I’ll ultimately end up anyway.

And for that… I’m grateful!