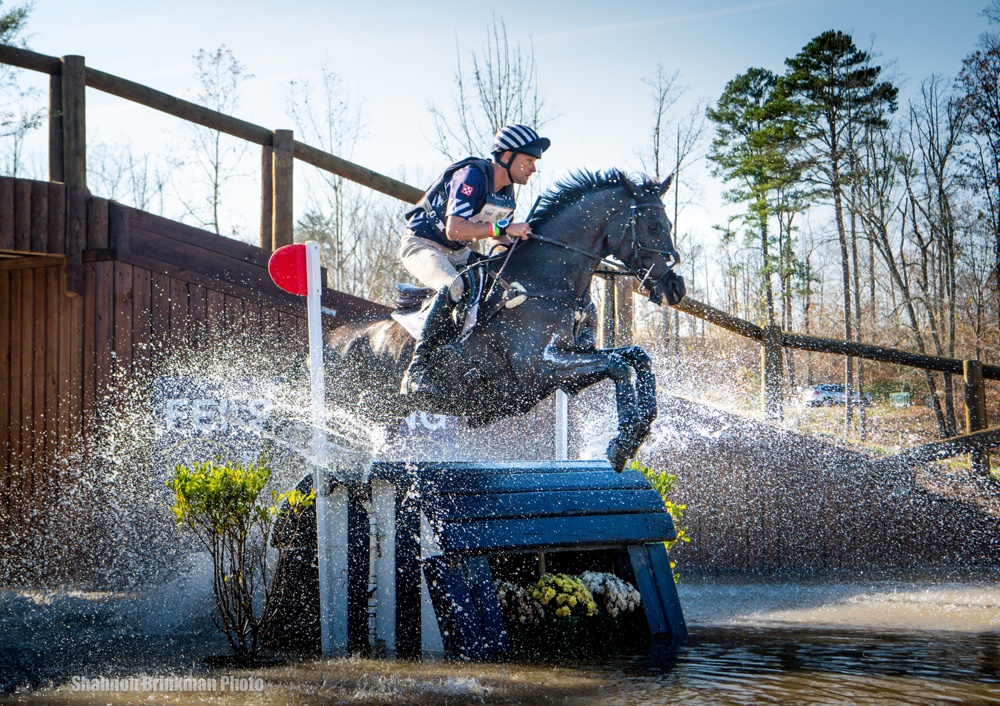 In doing so, Martin also earned the unofficial title of coast-to-coast champion, having won the only two CCI4*-L competitions this year—Galway Downs (Temecula, CA) a couple of weeks ago and now at Tryon International Equestrian Centre (Mill Spring, NC) today.

In sport, especially equestrian sport where success depends on the partnership of a human and a horse, one is constantly reminded that anything can (and will) happen. And that it’s never over until the very last fence. But let’s back up a moment and look at the weekend as a whole, because the only CCI4*-L on the east coast this year was nothing if not exciting.

Nobody needs reminding that in 2020, nothing is normal. So to have a starting field of nearly 80 in the CCI4*-L that reads like the start-list of the  Kentucky five-star should not have been surprising in a year where not much else was going on. (Tell that to Liz Halliday-Sharp who has had eight wins in 2020 alone—and came very VERY close to one more today.)

But the real kick in the shins to anyone who might have been feeling discouraged looking at their name among 79-ish others to start came mid-week when nearly 15 inches of rain fell on the cross-country course over a matter of a day.

Fortunately, the course itself is built on an old Arnold Palmer golf course and has spectacular drainage. Even still, course designer Captain Mark Phillips, who also built at Tryon for the 2018 WEG and is not generally known to bouts of expression, described the efforts by the staff at Tryon as “truly herculean.”

“There’s a 12-acre lake that we had to take sixteen inches of water out of,” he said. Not an insignificant task.

Ironically, the footing perhaps wasn’t the single biggest influence to Saturday’s shakeup in the standings (though it would be a very close second). It was rather a “simple” runout by the overnight leader, Marilyn Little with RF Scandalous.

The pair came into XC with a score of 21.5 penalties following a very nice dressage test. Unlike stadium jumping however, where a refusal is scored at four penalties, a refusal on cross-country will land you 20 per. So within a matter of seconds and within the first obstacles, Little not only relinquished the lead but landed somewhere in the mid-70’s. By their second refusal they called it a day.

This opened the door in an already incredibly tight race, allowing Liz Halliday-Sharp (USA) with Deniro-Z to slip into the lead before even setting out on cross-country.

Boyd and Phillip Dutton (USA) followed, along with underdog/dark horse of the weekend, Woods Baughman and C’est La Vie 135, who landed a podium finish in third overall, bookended between Reserve Champion Dutton on Z, and fourth placed Doug Payne on his veteran Vandiver.

Clean cross-country rounds with just a smattering of time penalties meant leaps up the scoreboard for some. Will Coleman (USA) and Don Dante jumped from tied for 33 after dressage to eighth overall. Zoe Crawford (USA) and KEC Zara lept from 76 after dressage to 19th. Olympic individual medalist Leslie Law (GBR) and Voltaire de Tre, who were 40th after dressage but had a conservative clear XC and a solid double clear on Sunday, finished 15th.

Of course the conditions did come into play, with the biggest advantage going to riders with multiple mounts. Ariel Grald (USA) who had horses across multiple divisions benefitted from the chance to adjust her plans as the day went on.

“I put the biggest studs I had in for the four-star,” she explained Saturday afternoon. “I slipped on a turn and fell down on my two-star horse this morning so we just went all in on the studs for the four-star.”

Riders such as Martin and Dutton who had multiple horses in the same division benefitted further.

“I had a couple of trips around already,” said Martin, “I sort of knew the spots that were quite deep and muddy, so I chose to slow down in those areas. Tsetserleg is a seasoned veteran now. He actually did the course quite easily. But I think this weekend is more about preparing them for next year. When I say next year, [I want to] improve them in all three areas. When we go to a five-star next year, they’ll be better than if we just sat around and drank beer on a couch.”

Martin made a point to credit the event and the staff for their efforts to deal with the deluge.

“I’d just like to absolutely take my hat off and thank the 20 or 30 guys and girls who’ve been out on the cross-country for the last couple of days,” Martin commented Saturday.

“It’s nice to win these competitions, but it’s more important that the horses are healthy afterwards. I think all of the riders should buy them beer tonight! They’ve been working like dogs out there, and I’m sure it’s been a huge expense to the event.”  Amen to that.

Is it worse to have the first rail down or the last?

Of course it sucks having any rail down when the scores are as tight as they were this weekend, but if you’re the overnight leader (which in eventing means you jump last on Sunday, going in reverse order of standing) as was Liz Halliday-Sharp, I think losing the competition by having the very last rail down must suck more than, well, pretty much anything.

They weren’t nearly the only ones to pull the last fence, a vertical set along the wall just inches from the in-gate. But the four penalties combined with clean rounds and tight scores meant a fifth-place finish rather than the Championship.

At the press conference following the awards, Martin reflected on riding under pressure:

“I truly believe ‘Thomas’ performs better when he has a bit of pressure. I’m not sure if he knows which events are important, but he seems to do really, really well in Dressage, Cross Country and Show Jumping when we need him.”

Martin went on to credit the event for pulling off a true championship in a pandemic year.

“I think Tryon is one of the best venues in the world. It would be an absolute crime if they didn’t have a permanent CCI long format event here. Even when conditions were atrocious, they’ve got the facility, the willpower, and the passion to put on a really, really good show,” he said.

“I’ve been lucky enough to compete all over the world and I’ve never seen so many people pull together to make the conditions fair for the horses, so I truly hope Tryon gets this as a permanent date or this event in the spring or something because it’s an unbelievable facility in all three phases. It’s the ultimate destination.”

Amen to that as well.