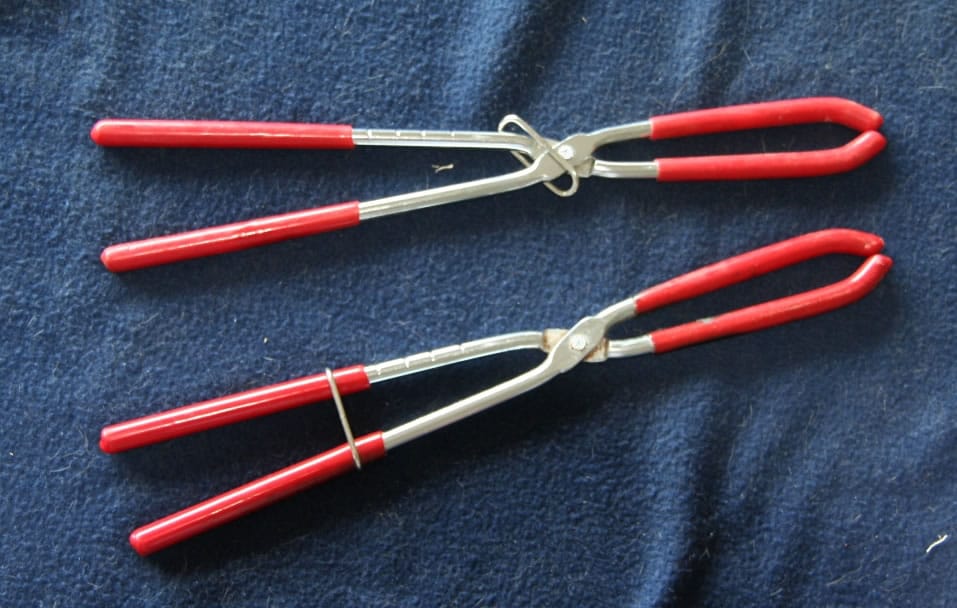 I will be the first to admit that I am really glad that I am practicing on horses in modern times, as opposed to just about any other times.

For example, sedatives, the drugs that make horses sleepy, are wonderful, because they make horses so much easier to work on.

Still, sometimes modern sedatives aren’t quite enough, or sometimes you don’t want to sedate a horse that you’re working on (maybe it’s at a horse show, for example). In those times, older methods of restraint may work just great. One of the more curious of those methods is the nose twitch (or just twitch).

SCHOLARLY ASIDE: I was curious why it’s called a twitch, so I started looking around. Not as easy to find the origin of the word as you might think: Google was useless. My copy of the Oxford English Dictionary (yes, I can be a bit nerdy at times) helped some, showing the first reference of the word in horses to come in 1623. But it was my 1933 copy of the Oxford Universal dictionary that had this obscure definition: “4. To pinch or pull at as with pincers or the like; to nip; to hurt or pain as by doing this.” So, there you go (although how much pain it causes a horse is an interesting discussion, as you’ll see below).

BY THE WAY: If you haven’t seen a twitch being applied, here’s a link to a quick video clip on the procedure:

NOTE: The video clip, above, shows just one kind of twitch. I’ve seen twitches made with metal chain, bicycle chain, baling twine, and all kinds of rope. I’ve seen handles made from baseball bats, old axes, hickory sticks, and broom handles. There are metal “humane” twitches, which can be used by one person, some of which clip to the halter, and others of which secure themselves. And they all essentially do the same thing: they pinch the horse’s muzzle (although I’ve also seen them put on a horse’s ear, which I wouldn’t advise unless you just want your horse to be head shy).

Now you look at this video, and you think, “OK, what’s going on here? You just tighten a loop of rope around a horse’s nose, and he’ll just stand there?”

And, most of the time, the answer is, “Yes, he’ll just stand there.” And there are several theories why.

Probably the most common explanation is that the causes a bit of dull pain. The idea is that this bit of pain will cause the horse to concentrate on the pain while an unpleasant task is being performed. That’s exactly what William Youatt, an English veterinary surgeon, wrote in his book, The Horse, in 1831. Youatt said, “The horse suffers great pain from the pressure—sufficiently great to render him comparatively inattentive to that which is produced by the operation; at the same time, he is afraid to struggle, for every motion increases the agony caused by the twitch, or the assistant has the power to increase it by giving an additional turn to the stick.”

If you like old veterinary books like I do—and this one’s a classic—you can even see the book online (the passage is on page 321).

There’s actually a well-known phenomenon called a diffuse noxious stimulus, whereby the perception of pain in one area can be diminished by pain in another area. So, for example, your headache might not feel so bad if someone kicks you hard in the shin.

I’m not really persuaded by that explanation, however. I’ve been around plenty of horses who have been in pain, and they usually don’t just stand there. Take a horse with colic (please). When a horse is in pain from a colic, he shows it. He rolls around, or paws, or gets up and down. When a horse is in pain from a lameness, he limps. Pain usually doesn’t make a horse just stand in one place, insensitive to his surroundings, it makes them want to get away from the pain.

I think there may be a more persuasive explanation.

In the 1980s, it was asserted that the twitch does its weirdness because it’s applied at an acupuncture point, and because of some sort of acupuncture-like effect. You can review an abstract of the article, which was published in a fairly prestigious journal. As you might guess, I’m not at all persuaded by this explanation, and for a variety of reasons, including that there’s never been any such thing as an acupuncture point demonstrated, in any species. (Read about why I wouldn’t bother with acupuncture.)

Some folks assert that the twitch works by triggering the release of endorphins from the horse’s brain. Endorphins are sort of like the body’s very own morphine, and they’ve been credited with all sorts of effects, including calming (which is something that narcotics generally do to people, and which is one reason why they are popular in drug abuse circles).

I’m not at all persuaded by that explanation, either, because there all sorts of things that cause endorphin levels to rise in the horse, such as putting them in a horse trailer and driving them around. Horses that are being hauled in a trailer do have high endorphin levels, but there certainly don’t stand there as if in a daze.

None of the above three reasons makes much sense to me. Here’s what I think.

Predators tend to react to the movement of their prey, but if the prey doesn’t move (instead of struggling or fighting), it can increase the probability that it will ultimately escape. If the prey doesn’t struggle, the predator can become distracted, and even temporarily release the prey, sometimes giving the prey enough time to run away.

Here’s an amazing video of that featuring one lucky impala:

Tonic immobility is characterized by pronounced physical immobility, trembling, muscular rigidity, sensations of cold and numbness, or insensitivity to intense or painful stimulation: exactly the sorts of things that the impala is doing. It’s caused by things such as fear and physical restriction, but the most important aspect may be the perceived incapacity to escape. That’s what I think is happening when a horse gets twitched.

If you haven’t used a twitch on a horse, don’t just run out and try it, or think of it as some sort of a fun parlor trick. You’d like to learn about twitches with an experienced person helping you out. Putting a twitch on a horse is something that does carry the potential for some adverse consequences. For example, I’ve seen poorly applied twitches come off in the middle of procedures (to explosive effect), and wooden handled twitches whirling around in the air after having been let go of by an inexperienced handler: trust me, the things hurt when they hit you. It’s a useful tool, but not one to be used unless you have some experience.

Anyway, that’s what I think about twitches. What about you?