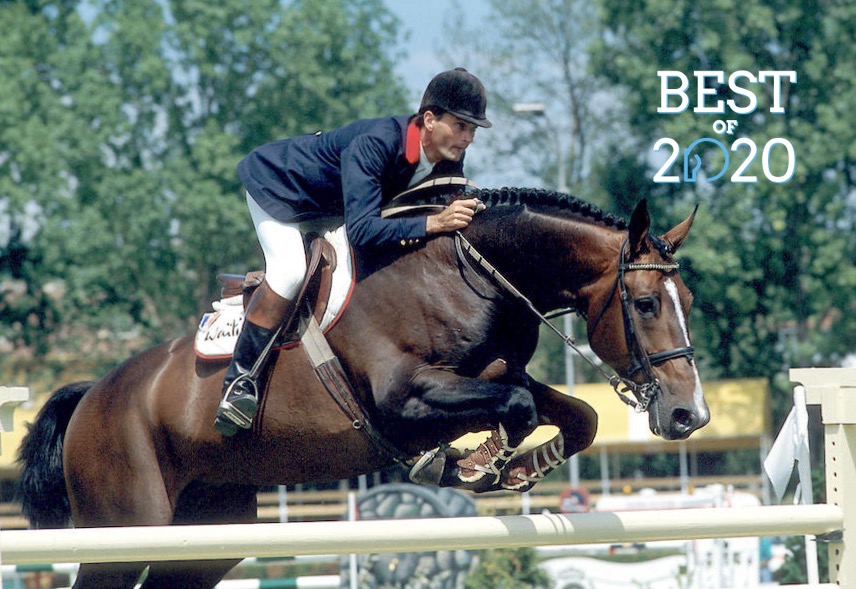 Whether it’s record setting sanctions in endurance for horse abuse, or allegations of electrified spurs being used in competition, welfare has been a hot-button issue this season in show jumping sport.

Outside of the stringent rules and regulations set by governing bodies such as the FEI, it often falls on individual riders to make the right calls for their equine partners, and especially when those calls fall in the “grey area” of good horsemanship. For example: When is the “right” age to retire a top-level horse that may still have more to give? How many classes are too many classes to jump during the course of a weeklong competition? How young is too young to test a horse at a major championship?

These issues aren’t new to the sport, but one key in how we handle them might be gleaned by studying the trajectory of those athletes who have weighed similar decisions in the past. Enter French rider Eric Navet and his shooting-star sport horse, the bay Selle Français stallion, Quito De Baussy.

“[Haras] De Baussy was my dad’s farm [in Normandy, France], and every single horse that was born there was called something ‘De Baussy,’” explains Navet, who began riding the homebred Quito as a young horse in 1985.

“This horse we didn’t geld—my dad kept him as a stallion—and like all the others, I broke him and started to educate him as a three-year-old, and then in the four-, five-, and six-year-old classes in France. When he was seven, I moved him up to the 1.35m–1.40m, and by the end of the year, we did our first national grand prix.”

From the beginning, it was clear to Navet that there was something special about Quito. During the stallion’s 1990 season, his performance began to attract the attention of the show jumping community at large.

“When he was eight, everything came so fast, because the first show was the World Cup Qualifier in [Paris], and I ended up second [and] double-clear,” Navet explains.

A string of successes followed at Nations Cup and top-level grand prix competitions in Switzerland and France, all of it coming to a head that summer of 1990. At that time, selections were due for the first edition of the FEI World Equestrian Games, taking place in Stockholm, Sweden in July. Navet and Quito were at the top of the French Team’s wish list.

Ultimately, he was convinced to ride in the Team competition at the WEG, but publicly announced that he would forego Individual competition with Quito De Baussy even if the pair qualified.

Naturally, and as the expression goes, announcing your plans is a good way to hear God laugh.

“Quito was not the fastest horse. He had scope, but he was not a quick mover. We had a good first day. I was the least fast—the other three [teammates Hubert Bourdy, Roger Yves-Bost and Pierre Durand] were pretty fast,” Navet recalls.

“We took the lead after the first day, and in the Team class, we had a very good time. I was double-clear, and so were the other two, and [we won gold].

In one of the most difficult calls of his professional career, Navet says he went back on his word and decided to jump for the Individual gold with Quito, worrying all the while that he was forever damaging his young horse’s confidence on this major stage.

In the following rounds of competition, Navet and Quito qualified for the final four, which, at that time, required the top riders to switch horses in the last round. That year, in particular, featured some of show jumping’s most iconic combinations, among them: Greg Best (USA) & Gem Twist, Hubert Bourdy (FRA) & Morgat, and John Whitaker (GBR) & Henderson Milton.

“I had the huge privilege, the last day in the final four, to jump both Gem Twist and Milton,” says a still-delighted Navet. “It’s a fantastic souvenir, [and it’s] thanks to my young horse, Quito de Baussy.”

For Navet, who also won the Individual final that day, there were more momentous souvenirs to come.

“I came back from those Games with two gold medals. It was such a fantastic moment, because it was a horse that came from the oldest family of horses that my great-granddad, and my granddad, and my dad had kept going.”

Even more rewarding for Navet was the fact that history would ultimately prove that his horseman’s intuition was correct. Young as he was at the time, that legendary performance at the World Equestrian Games was just the start for Quito De Baussy.

“He was not destroyed as an eight-year-old, winning a double-gold medal at the [WEG],” Navet says. “In the next four years, [Quito] took six medals in five championships in a row.”

Those championships included winning the Individual European title in 1991, Team bronze for France at the Barcelona Olympics in 1992, Team bronze at the Europeans in 1993, and Team silver at the 1994 World Equestrian Games at The Hague. One year later, however, Navet was once again called upon to examine his horse’s mindset.

The French rider was beginning to worry that Quito De Baussy, at age 13, was losing his zeal for the show ring. This time, and despite the thousands of dollars in grand prix prize money that might still be on the table, Navet made a different call.

“We decided to retire [Quito] when he was 13, not because he was injured, but I think he had given enough. He wasn’t the same, and he didn’t have the same enthusiasm [as he did before],” Navet says. “I decided to retire him rather than force him [to do the job] and ride him like a normal horse.”

In the years that followed, the stallion went on to have significant success in the breeding shed, though Quito never strayed too far from his old friend and partner, Navet. He died in October 2015 in the same way that he had lived: proud, revered, and beloved by the family of breeders and the rider whose dedication to his welfare had always been a top priority.

“[Quito] passed away five years ago at my farm at the age of 33. He had 20 years of retirement, and he was buried at my farm. I didn’t want him to leave,” says Navet, a wistful smile breaking across his face.