Help, My Mare’s in Heat 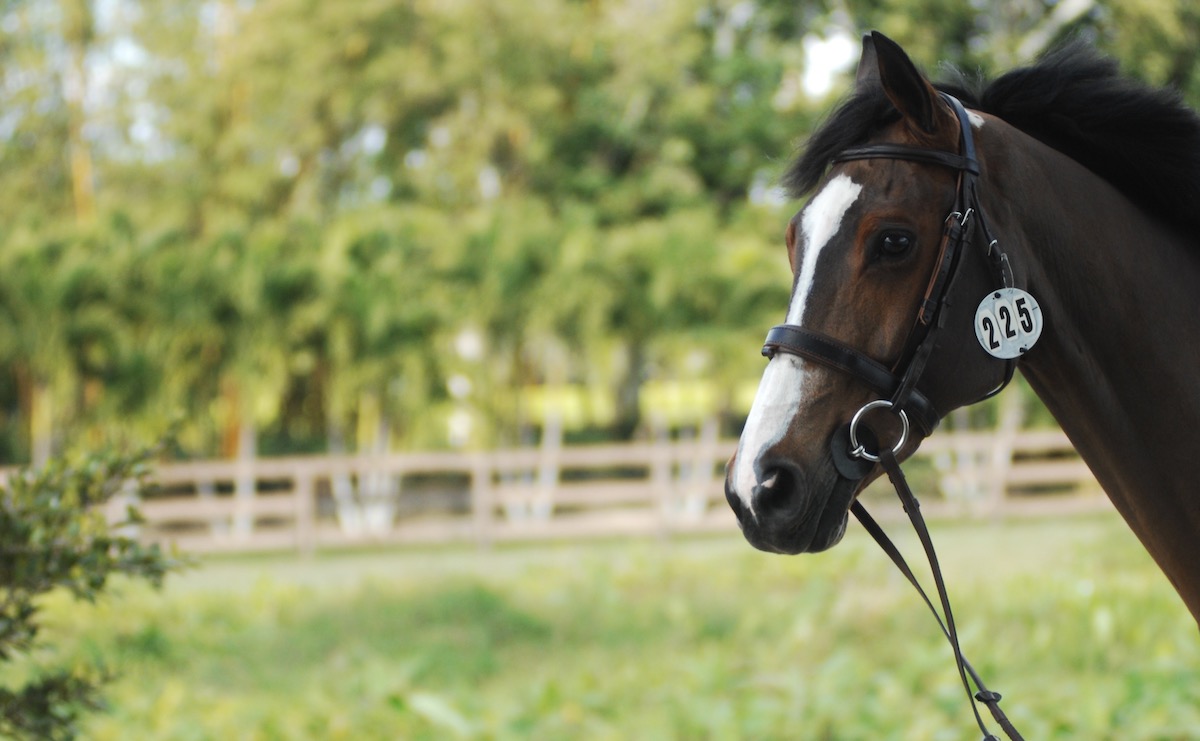 OK. You’re convinced that your mare has behavioral problems because of her heat cycle.

(Not sure? Read Part 1 of this series to brush up on that.) You want to do something about it. You have lots of options. What do you do?

In my experience, for most people, there seems to be two requirements when it comes to picking treatments to keep mares out of heat.

ONE OF MY FAVORITE QUOTES: “For every problem there is one solution which is simple, neat and wrong.” — H.L. Mencken

As you might guess, based on how the mare’s reproductive system works, the solution to the “problem” of mares coming into heat is mostly centered around giving them progesterone, progesterone derivatives, or doing things to get the mare’s body to make progesterone. As it turns out, chemists have been pretty good at synthesizing progesterone. Herein lies both the good news and the bad news.

The good news is that appropriate doses of progesterone, or progesterone derivatives, will keep mares out of heat.

Anyway, with that understanding, here’s a list of things that can be done to keep mares out of heat (and not), and here’s what’s known about them.

For several decades, people have taken hormones such as progesterone and they’ve put them into little pellets that release the hormones over time. These pellets are supposed to be implanted under the skin.

Anyway, in the 1980s, some enterprising person decided to put those cattle implants under the skin of horses, in hopes that they’d release the progesterone slowly, and that in so-doing, the mares wouldn’t come into heat.

THEY DON’T WORK! Several good studies have shown this. There’s not enough progesterone in these things to keep mares out of heat for one day, must less for months (as may be advertised). Save yourself some money, save your horse an unnecessary surgery, and remember this: The progesterone “implants” that people sometimes stick in horses aren’t made for horses and they don’t work.

So… if it works for people, it must work for horses, right?

Well, in a word, NO! Why? Same reason the pellets don’t work. There’s not enough progesterone in the shot to make a difference in a horse. And it’s been tested several times, too.

Add to the mix that, in performance horses in the United States, the United States Equestrian Federation is considering banning the drug and requires a form to be submitted if the medication has been given within 90 days of competition and you’ve got more headaches. Bottom line? Don’t bother giving your mare a Depo-Provera® shot to keep her out of heat.

This one works. Altrenogest (the medication has been sold under the trade name of Regumate®) is a form of progesterone that’s given orally—birth control pills for women have forms of progesterone in them, as well. The appropriate dose, given daily, keeps mares out of heat.

BUT… it’s not necessarily convenient, which is counter to Rule #2 at the start of the article about the requirements for a good therapy.

a. It’s a liquid, and mare’s may spit it out because they may not like it. (Otherwise stated: it can be a pain to give, and it can be messy.)

b. It can get absorbed through human skin. As such, if it does, and it happens enough, it can affect the reproductive cycle of a woman who is carelessly giving it. (So be careful.)

Neither of these problems is insurmountable, but the fact is giving your mare Regumate® every day does require you to be careful and diligent (which are not traits that everyone has). And, honestly, that’s one big reason why people have looked for other options—even options that don’t work.

But the bottom line? Altrenogest is an effective way to keep mares from coming into heat.

Progesterone can be put into carriers that cause it to be slowly released into the mare’s system—the same idea behind the implants, but this one actually works.

Many of these long-acting progesterone products are compounded, that is, they aren’t FDA approved drugs. Compounded drugs are quite controversial in the horse world; they aren’t the same thing as the drugs that you get from government-approved sources. Still, they’re everywhere, and some of them have even been tested.

These products are given on various schedules, from once-a-week, to every 30 days, in the muscle. The good news is that some of them work. The bad news is that they haven’t all been tested, and they can sometimes make horses sore at the injection site. It’s always something, isn’t it?

This is an interesting one. Oxytocin is a drug that is most commonly used to assist in uterine contractions; as such, it’s given to women to help with delivery of their babies. But oxytocin also has another effect—it blocks the breakdown of the structure that forms on the ovary after the egg is released: a structure called the corpus luteum. The corpus luteum produces progesterone, and if it doesn’t break down normally, as it does with every heat cycle, it keeps on producing progesterone.

In 2008, researchers found that by giving 60 international units (I.U. – that’s how it’s measured) of oxytocin twice on days 7 and 14 after a mare ovulates, they could keep mares from coming into heat for at least 30 days.

The good news? It works for at least 30 days. Some practitioners report suppression of heat cycles for up to 90 days. Some also report that you can give lower doses, and only once on days 7 and 14 after ovulation.

The bad news? You have to know when the mare ovulated, which means that you have to have your veterinarian check on her.

6. A sterile marble in the uterus

This idea was proposed at least a decade ago. The idea was that the marble is supposed to keep the corpus luteum from breaking down, much like oxytocin injections do, by irritating the lining of the uterus (there’s a point at which too much physiology makes an article unreadable, and I fear we’re getting to that point).

Uterine marbles have been studied. The good news is that it can work, and the treatment is relatively cheap and easy (always a good thing, when it comes to treatments). Best of all, you only have to do it once—hopefully.

The bad news is that the treatment isn’t reliable. It doesn’t work in very many mares, and it can also cause some serious complications. The marble can fall out, too. You can read more from the Colorado State University Department of Equine Reproduction if you CLICK HERE.

That’s right, taking the ovaries out. I mean, that should solve the problem, right? No ovaries, no hormones, no problem! Right?

Well, crazily, no. One study from 1993 showed that as many as 35% of spayed mares still show signs of heat, even though most of the owners were happy with the results.

On the plus side, you only have to spay the mare once. On the minus side, you’ve got the expense of surgery, and the fact that you can’t change your mind if you later decide that you want to breed your mare. While spaying your mare is an option, it may not be that great an option and it may not always work.

There are a bunch of products out there that cater to people who have overblown fears of pharmaceutical products. These folks are afraid of drugs, but they seem to be more than willing to use “natural” products that act like, well… drugs. Go figure. And, as I’ve said before, “natural” is a word that I am not fond of at all. (Have you ever been caught in a “natural” hurricane?)

One common ingredient in such products is raspberry leaves. Now I don’t have anything against raspberries—I will get up and defend the virtues of raspberries on a bowl of corn flakes until my dying breath. But that’s far different than feeding leaves to your mare hoping that it will change her behavior (and your life) for the better.

Here’s a claim for raspberry leaves: “Raspberry is an herb widely known for its benefits to mares because it is believed to temper the effects of hormonal fluctuations. The active ingredients in Raspberry are thought to help regulate smooth muscle tone…”

Two observations. First, notice the words “believed” and “thought?” Who believes and thinks these things? Why not just test them, and find out if they actually do anything (NOTE: The answer is, “Because then you probably wouldn’t be able to sell them.) And second, there is a good bit known about raspberry leaves, they haven’t been shown to be effective for any of the things for which they are used. Amazingly, in pharmacology circles, raspberry leaves are thought to have estrogenic effects: estrogen is the hormone that’s highest when the mare is in heat. And why, exactly, would you want that if you’re trying to keep her out of heat?

Mares are mostly great. But if you think that your mare is having behavioral problems, why not have her examined by your veterinarian first? Check to see if she’s in heat, or if she has some other problem (such as a hormone-producing ovarian tumor) before you do anything? If, after you’ve had her checked, you want to try to control her heat cycle, that’s fine, but personally, I’d try something that’s likely to work, even if it does take a bit more effort. An easy solution isn’t a very good solution if it doesn’t do anything other than cost you money.