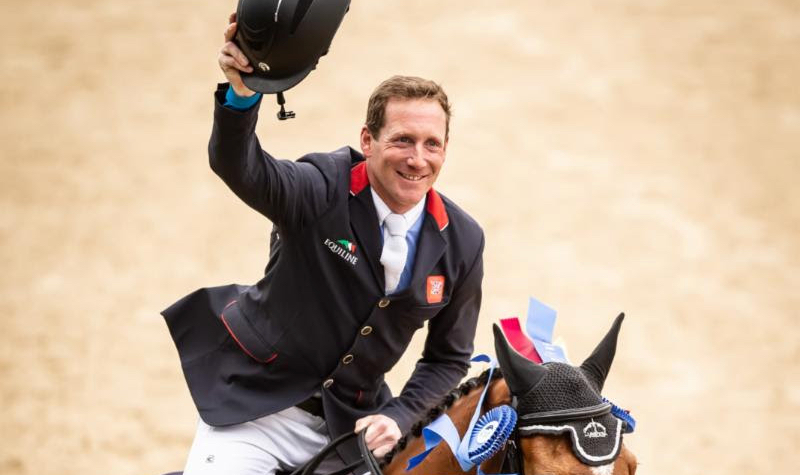 The pressure was on for the defending champion during the third leg of Land Rover Kentucky Three Day Event competition. As the overnight leader, he was the final rider to challenge the Richard Jeffrey stadium jump course.

For the second year in a row, Townend put together a clutch clear round with 14-year-old Irish Sport Horse Cooley Master Class to take the Championship title.

For Master Class and Townend it’s the fruits of a partnership a decade in the making. Townend took over the ride from Olympian Andrew Nicholson when the gelding was just four-years-old.

“We’ve had the horse from word go, and it’s a huge team effort,” said Townend.

“So much effort goes into it, not just on my part. The horse has had a checkered career and we’ve finally got him on top form. We’ve always believed in the horse, and it’s thanks to everybody at home putting in a huge team effort. It was just my job to push the buttons at the right point in time. I couldn’t be more proud of the horse and the whole team.”

Leaving all the fences in place, including the boogey liverpool that caught out 11 competitors, Townend and his veteran partner swept all three phases of the five star event, finishing on a score of 25.3.

“We had a rub at the Land Rover water tray but he’s a very good jumper so even when he touches a jump, he does it lightly and then apologizes for the next six jumps.” said Townend.

“It was definitely the most (high pressure) round I’ve ever ridden and I’m just glad I didn’t muck it up for him.”

The reigning world number one is the first British rider to win the Kentucky Three-Day Event two years in a row. In the event’s 41-year history only three other riders have been able to successfully defend their titles. Bruce Davison, Kim Severson, and Michael Jung have to welcome a new member to their club.

Boyd Martin took the reserve position with 12-year-old Trakehner gelding Testserleg. After an expressive warm-up he jumped clear and finished on a score of 27.9.

“I was thrilled with my bloke today,” he said.

“He doesn’t give you the most confidence in warm-up. He was jumping all over the shop and twisting and these other two (Price and Townend) were giggling at me a bit. But he gets in the ring and spooks that little bit and I think he loves the atmosphere and the crowd,” admitted Boyd.

“He tapped the first fence and I thought, ‘oh, crap this is going to be a long round,’ but then he really tried.”

More photos for Boyd Martin’s toddler is perhaps the only downside to a podium finish.

Tim Price was the third place finisher with Xavier Faer, a 13-year-old British Sport Horse Gelding who keeps Price on his toes.

“My guy’s a bit of a Kinder Surprise, you’re never sure what you’re going to have until you get out there,” he said.

“He’s a lovely, big, scopey honest horse, and he will come on from this and be an exciting horse as he gets more established.”