Haygain sponsored rider Jamie Barge is a short-listed member of the US show jumping team, a World Cup finalist, and a threat in any jump off. She’s also hearing impaired. Here Barge shares what it takes to be successful at the international level when you start with a competitive disadvantage. As told to Carley Sparks.

Everybody has to deal with something. For me, that something is hearing impairment.

I started to lose my hearing at age 1. When I was 11, I lost all hearing in my left ear following an accident trailering my pony. When I hit my head, I often lose more hearing. Sometimes it comes back, but not usually to the level it was before. Sometimes, it doesn’t.

Obviously, that isn’t an ideal situation when you compete in a sport renown for traumatic head injuries. But it’s a risk I’m willing to take because I love this sport.

And I can’t imagine not being around horses. There are worse things than being hearing impaired. 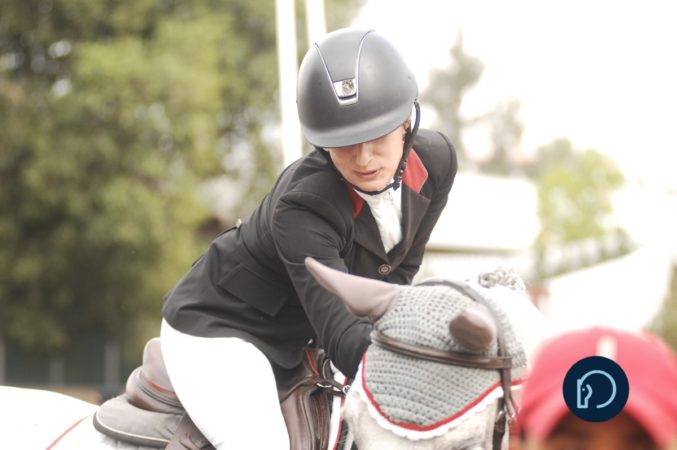 What hearing I do have I make the most of with modern technology. I wear a hearing aid in my right ear, which amplifies sound. Hearing aids don’t differentiate though, so everything comes in louder. I’m not able to block out background noise or to zone in on one sound or another. I can’t filter out other noises and hear one trainer in the warm up ring, for instance.

In my left ear I have a cochlear implant, which allows me to hear a greater range of sound and helps me hear better in noisy environments. It doesn’t sound like normal hearing, though. Cochlear implants covert sounds into electrical signals, so it’s a synthesized version of sound. I resisted getting one for the longest time. But as my hearing loss progressed, I was really happy to have it. It made a big difference. 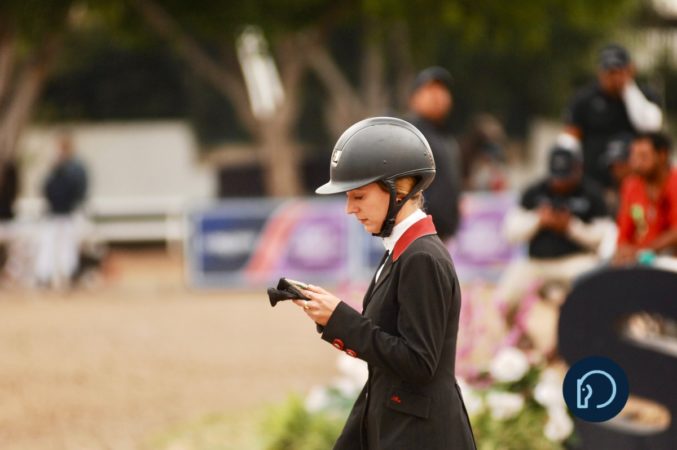 The wonderful thing about show jumping is that you can still compete at the highest level with a hearing impairment.

There aren’t many other sports that you can do that. I’d be hard to be a sprinter, for example, if you couldn’t hear the start gun.

Some people think there might even be advantages. I’m not sure I’d go quite that far.

People have told me that maybe it’s beneficial because I don’t hear all the music playing, or the crowds, or all that extra noise. But my horse hears it, so sometimes I think that’s a little bit of a disadvantage—he can catch me off guard when he’s startled by a noise and Luebbo (Bo), my top horse, is easily set off.

Some people think that it might help with my focus. I mean, I don’t know. Maybe it does. I don’t know otherwise. 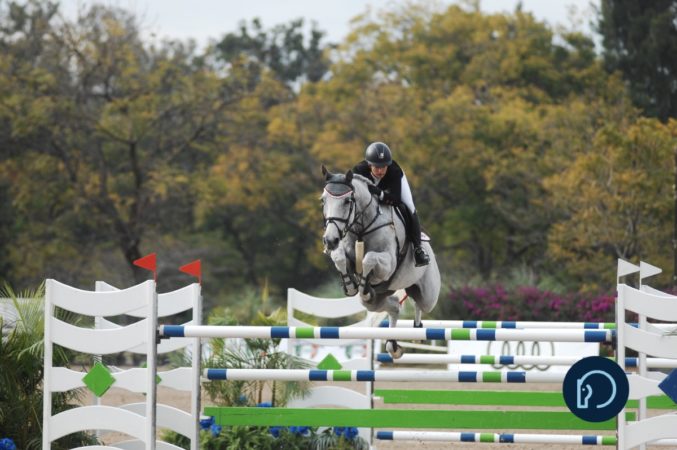 I do know that there are challenges competing with a hearing impairment that most riders probably don’t worry about too much.

The warm up ring, for instance, can be tricky. I don’t hear the back gate announcer calling the order or updates, so I have to check in with them frequently to find out where I am in the order and if the time allowed has changed, etc. They probably do the most to help me at shows; I ask a lot of questions.

I can’t hear horses coming up behind me in the warm up, so I have to be extra visually aware. That can be problematic with Bo. He’s not very good in traffic. If the warm up is crowded, I have to warm him up somewhere else if I can and then only jump a couple of fences in the actual warm up arena.

In the ring, I have to always make sure that the clock is working and that I can see it so I know when to start because I don’t hear the bell. Sometimes when Bo hears it, he starts hopping around and I kind of have an idea that the bell went off. But I always have to check.

I don’t always hear the rails fall, either. I feel it. But, sometimes you just rub one and it doesn’t actually fall.

Or Bo might touch a pole so lightly that I don’t know that I had a rail—that can be a disadvantage if it’s a jump off or a faults converted class and you need to go a little faster or take an inside turn because you had a rail. I can’t do anything to change that, so I just try to stick to my plan and ride each course jump by jump like I didn’t have any rails and see where we end up.

Even that last part takes extra steps though.

I always check the scoreboard on the way out of the ring to see where we stand, but sometimes there is so much adrenaline and energy that I don’t read it right!

One class in Del Mar, I saw an eight on the board and I thought I had two rails because there were a couple of places that we rubbed. I finished watching the class and left. At dinner, I got a text message saying that I was 12th place and I wasn’t there for the prize giving. Apparently I had gone clear and I was in eighth place!

I got in trouble for that mistake. Now I make sure I double check my score when I get off and am calmed down. 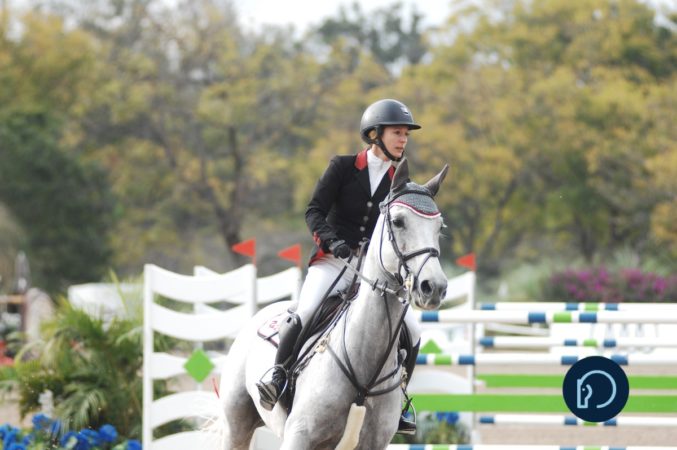 There’s no question that my hearing deficiency can create challenges when I’m competing.

But when it comes to the actual riding, I don’t feel disadvantaged.

Riding is all about your relationship with the horse and I don’t think my hearing impairment affects that at all.

Bo and I have an incredible relationship. I’ve had him going on four years now, since the end of his eight-year-old year, so we’ve had a long time to work together.

In the beginning, I went really slow and made sure we were both confident before I moved up. It took a little while to get used to his canter, it felt so long and wiggly. He never went straight and was always going with his head up. Now, I’m used to it, but I remember thinking, Oh my goodness, how can I sit this canter?!

I loved the jumping instantly, though. It was just a really good feeling from the beginning and he always wants to go to the jump. That’s a great quality in a horse. 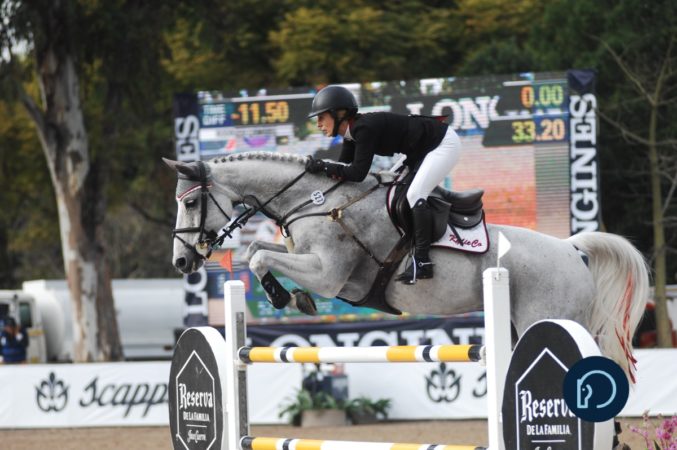 In the barn, Bo has a lot of personality.

It’s just that you never know which Bo you’re going to get. He can be very, very sweet when it’s just him and me or him and his groom. But if he feels like people are watching, he pins his ears back and is like, “Ah, don’t touch me!”

He really is a loveable horse though. He likes to be funny and play games. If you’re not paying attention, he’ll try to very slowly step on your foot. He looks away, picks his head up, but then slowly tries to puts his foot on yours. He’s never gotten me, but he likes to try. He’s just always playing around. 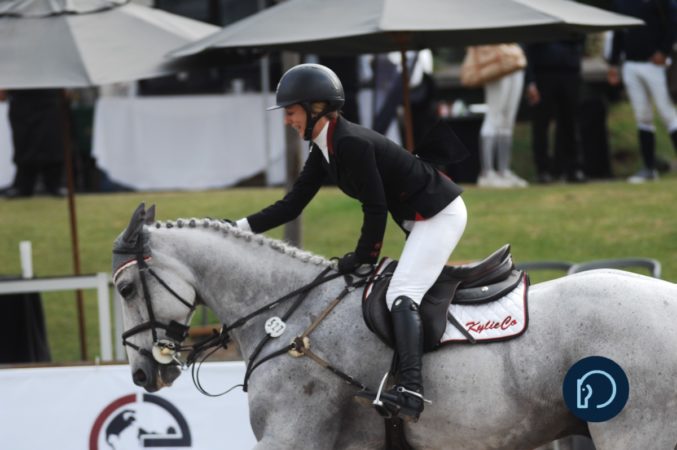 Last summer in Europe, Bo had a little bit of a cough. It wasn’t bad. He’d cough once or twice when I started working him, then it would go away and come back. We started him on Haygain steamed hay and ever since he hasn’t coughed at all. I was shocked by how fast I saw a difference.

It’s improved his appetite dramatically, too. He used to leave a lot of hay waste in his stall. With Haygain steamed hay, he eats every piece we feed him.

In the ring, Bo is a spectacular partner, a really good boy.

I think he trusts me. For sure, I trust him. I know he’s going to try his heart out. At the World Cup Final in Omaha, it was in a little indoor and it was a tough course and it was really hard. I had a hard time riding that course and just every jump I felt like he gave me a 120 percent. I remember thinking, Are we going to finish this course?! Because he was jumping so high! I really had to hold on.

But he’s also quirky and unconventional. Early in our career, sometimes it would make me a little nervous when he would spin in the in-gate or mess around before the timers. But I know him well enough now to know that once I get going, he’s game. He’s paying attention and he’s focused. He’s not playing around. Sometimes it can be hard to get in and get started.

I’ve come very close to falling off in the prize giving too! If he sees another horse acting up out of the corner of his eye, he’ll start spinning.

The trick with him, I think, is keeping it in the box. Relaxed.

I usually get on really early because sometimes he’s relaxed and quiet and other times he’s a little more up and it takes me a little longer to walk and just get him to trot nicely and all that. But I’m so used to him now, it doesn’t really bother me. I just have to allow time to work around that a little bit.

Haygain is committed to improving equine health through scientific research, product innovation and consumer education in respiratory and other health issues. With offices in the USA and England, Haygain distributes products for healthier horses to 19 countries, including its Haygain® Hay Steamers, ComfortStall® Orthopedic Sealed Flooring System and Flexineb® Portable Equine Nebulizer. Visit www.haygain.us for more information.