But before we get to that story, we have to start with one about a well-educated “antique junkie” working in the nonprofit sector of academic management. Because obviously.

Rebecca Yuhasz Smith, the creative force behind Rebecca Ray Designs, comes from a long line of artists dating back to her great-grandmother—among them a leading florist, a sculptor, an architect and an illustrator. She has deep family ties to the show dog community. (Both her mother and grandmother have judged international dog shows; Yuhasz Smith breeds champion English Setters.) And she has a Master’s degree in education that led to a position running a nonprofit vocational community outreach program for teens. 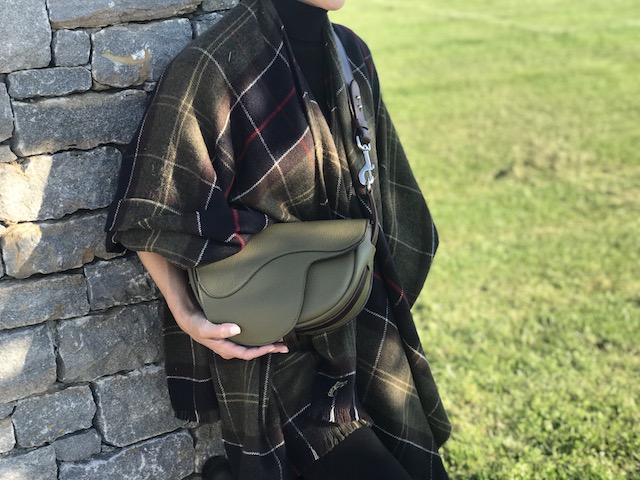 Necessity is said to be the mother of all invention. For Rebecca Ray Designs, it was her husband’s job change.

During the dot com boom, Yuhasz Smith and her software exec husband relocated to California. Finding herself out of work and in an unfamiliar city, she started looking for “something to do in design.”

“I am an antique junkie. I need a 12-step program,” laughed Yuhasz Smith. “I’m not a hoarder and I’m not particular on provenance, I just love interesting things. Through the years, I have amassed a sporting art collection—sporting dogs, hunting dogs, equestrian art.

“I wanted to do something that combined my collection and some form of art with a product.”

“I sewed the bags myself,” said the designer, confessing, “I’m not a very good seamstress, to be honest.”

It wasn’t long before her custom creations picked up steam in the dog show world. But it was a few years and a contest in Country Living magazine later that launched her hobby into a business proper.

“I was in bed one night reading the magazine and told my husband, ‘Country Living is having a contest for female entrepreneurs. I think I fit the criteria! I’m going to enter.”

Yuhasz Smith ended up a top seven finalist; it was the spark that lit the flame to expand Rebecca Ray Designs. 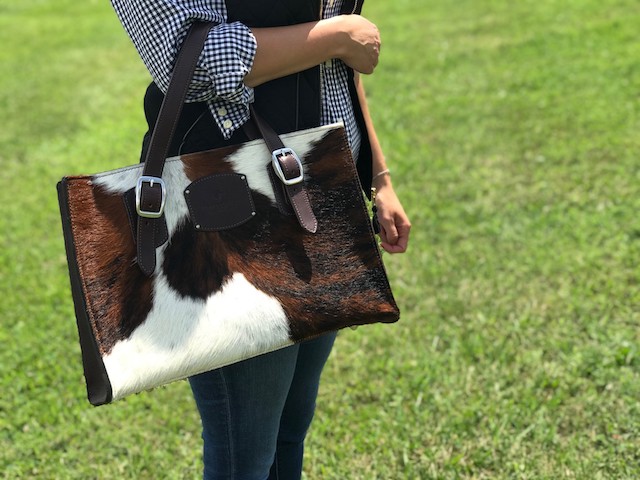 The contest clued the bag craftsman into the greater potential for her brand. But if she was going to make a go of the business, there were parameters inspired by her previous work in community outreach that she wanted to satisfy first.

“My education and teaching was in helping high school students find vocations. I was used to making these partnerships and connections in the community. I told my husband, ‘If I do this, it has to be a win/win for the local community—we have to offer employment and vocational jobs and the products have to be made in America.’ The business had to check off a lot boxes for me,” she explained.

“I was shut down on all fronts. I didn’t know a lot about the Amish community then,” she said. “I do now.”

It was while renovating her house that she found a foot in the door of the close-knit community.

“Our contractor happened to be Amish. One day while he was up on a ladder working, I called up: “Hey, do you know anyone in your community who likes to sew?”

“But is she any good?” Smith questioned.

He gave her a funny look, “She sews all of ours clothes.”

The contractor’s wife, Mary Ann, agreed to meet with Yuhasz Smith. A short tutorial in the Smith’s basement later, Mary Ann took home a pattern and some fabric with a promise to see what she can do. Two days later, Lester returned to work with the bag.

“She made it perfectly!” said Smith. “We became fast friends. We both had infants when we started. Mary Ann now has 13 children, I have one, and she runs organizational circles around me!”

The Mary Ann bag, one of Rebecca Ray’s best-sellers, is named after the seamstress. 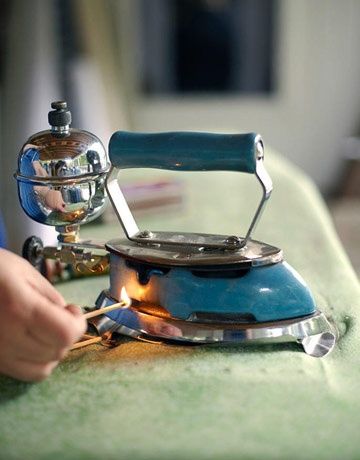 “Mary Ann still works for us. She now manages up to 13 Amish seamstresses out of her home,” said Yuhasz Smith.

“They do all of our soft goods. It’s all made by hand on foot-powered treadle sewing machines and using non-electric tools, like flame-heated irons.” 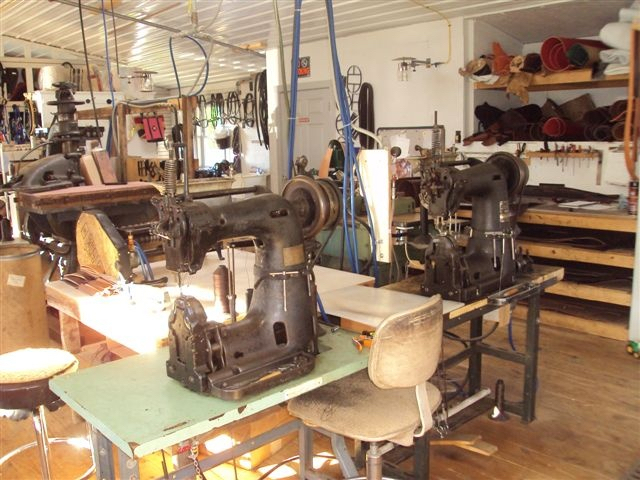 When Yuhasz Smith decided to moved into leather goods, she again turned to the Amish community.

“I was intrigued by harness makers and thought they could do the same job,” she said. “We found a group in Lancaster that made horse collars for the Calvary back in the day. They’ve been with us for 10 years.”

In keeping with her commitment to American made products, 90% of Rebecca Ray leathers are harvested in the USA, using responsible tanning practices and a water-based finishing process.

“What we’re doing with this leather, if you could see the process, each product is a piece of art,” said the designer.

“The snaffle bit cuffs alone take 20 plus steps. It literally starts with them rolling out a hide.” 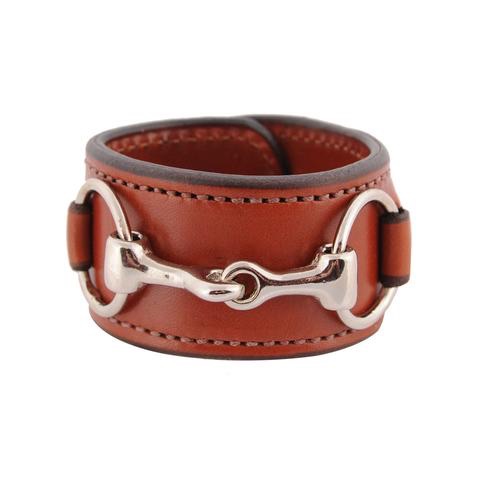 “We have some stamps,” she continued, “but the big pieces are all cut out by hand and the edges are hand burnished. There’s nothing automated about what we do. We makes bags that are meant to last forever.”

For equestrians, the most distinctive feature of Rebecca Ray products are the subtle nods to horse life. The line launched in the world of competitive dog shows, but Yuhasz Smith, a lifelong equestrian, is a horse girl at heart. It’s an influence strongly represented in her line.

“In our family, we’re all very authentic equestrians—my husband, daughter and I all ride—so that’s what interested me the most. All my ideas were coming straight from horse tack: stirrup leathers, harness, surcingles.”

The innovative craftsman incorporates solid nickel and brass equestrian hardware into her designs. “It’s the same hardware used to make harness and halters because holds up forever,” she explained.

“We use bridle leather and white bridle stitching details. We make replica antique rosettes like the ones used on driving headstalls. If you’re a horse person, you understand how authentic it is.”

For a self-professed lover of antiques, it’s fitting that Yuhasz Smith would create a company that pays homage to the craftsmanship of a bygone era. But her relationship with the Amish extends beyond business.

“Our children have grown up together. I’ve been to Amish weddings and funerals. We stay in their home and have meals together,” she said. “We’ve learned a ton about the Amish community and our children have learned about diversity. It’s a neat social component. I appreciate the Amish culture tremendously and we are really fortunate that they’ve embraced us.” 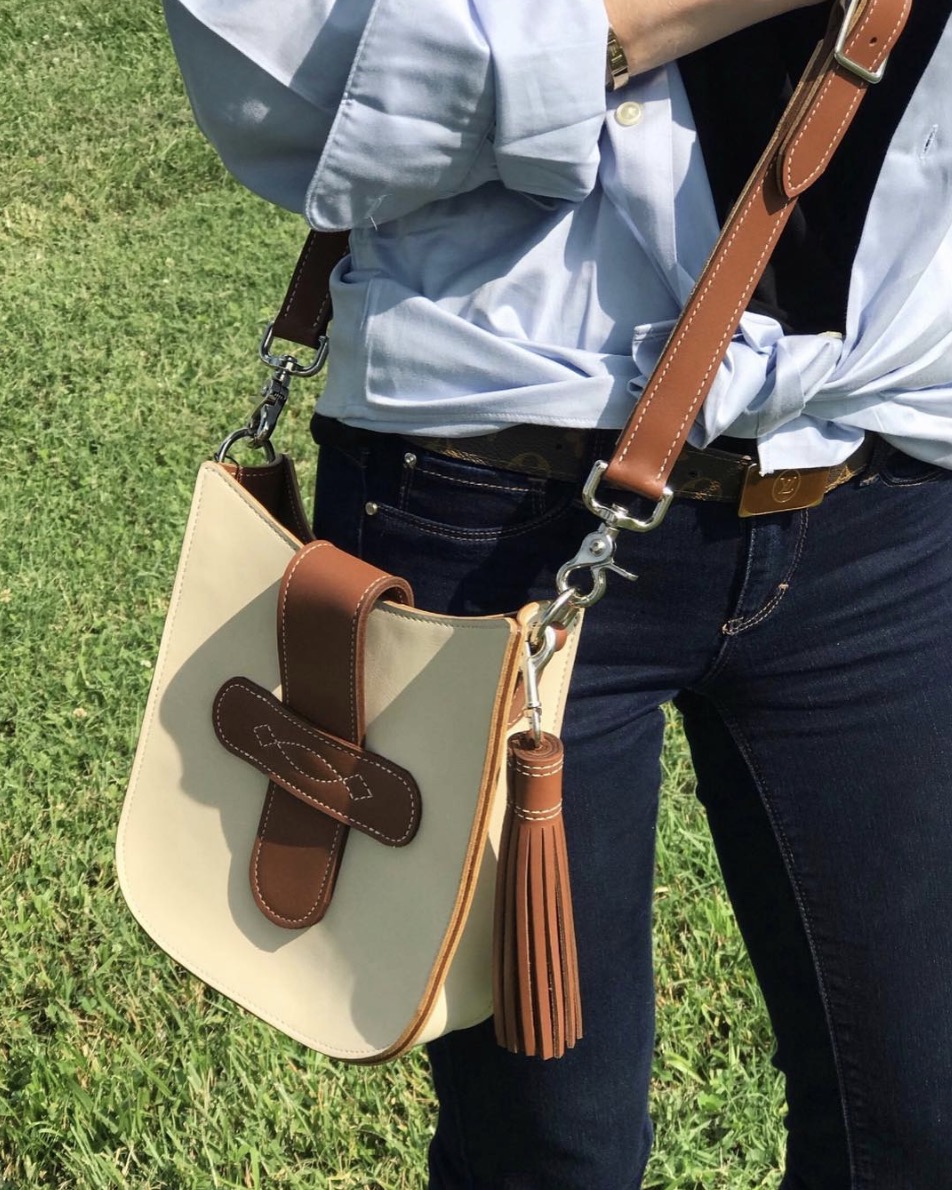 That’s not to say there haven’t been learning curves on both sides.

For Yuhasz Smith, it’s a commitment to running a modern business—Rebecca Ray has made bags for such famed events as the Breeders’ Cup, the Kentucky Derby, the Land Rover Kentucky Three Day Event plus dozens others and supplies stores throughout the country—without the convenience of computers and cell phones to communicate with her production partners. It also means scheduling around canning and wedding seasons.

“We have to mail our orders in. Everything is on a ledger and hand written,” said Yuhasz Smith. “It’s like stepping into the past. We’ll take a lunch break at the workshop and there are farmers plowing with mule power outside.”

For the part of her Amish business partners, some of the design asks can seem strange.

‘“Our lead harness maker is an ingenious soul. He thinks it’s amusing, some of the things we do,” laughed Yuhasz Smith.

The decorative tassels that figure prominently in Rebecca Ray designs is one such example.

“I was showing them how to make them and he asked, ‘What does it do?’

‘Yes, but what’s its purpose?’

“Some of the things we do are foreign to them,” she explained. 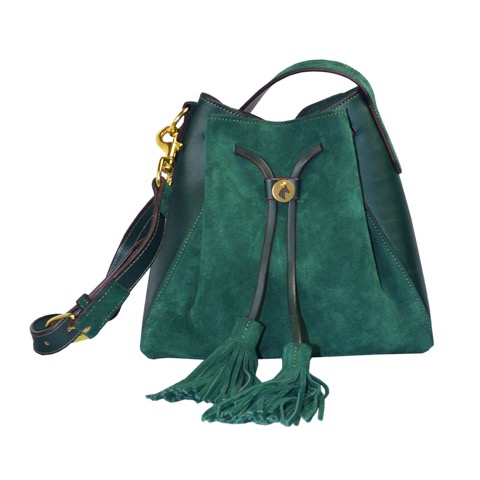 Cultural differences aside, it’s a time tested match. Rebecca Ray is a brand rooted in the traditions of the past, but with a distinctively fresh take for the present day—a mirror of the designer herself.

“I’m so lucky!” said Yuhasz Smith. “Who would have ever thought that I’d get to mix all these interests and parlay that into a viable made-in-America business?”