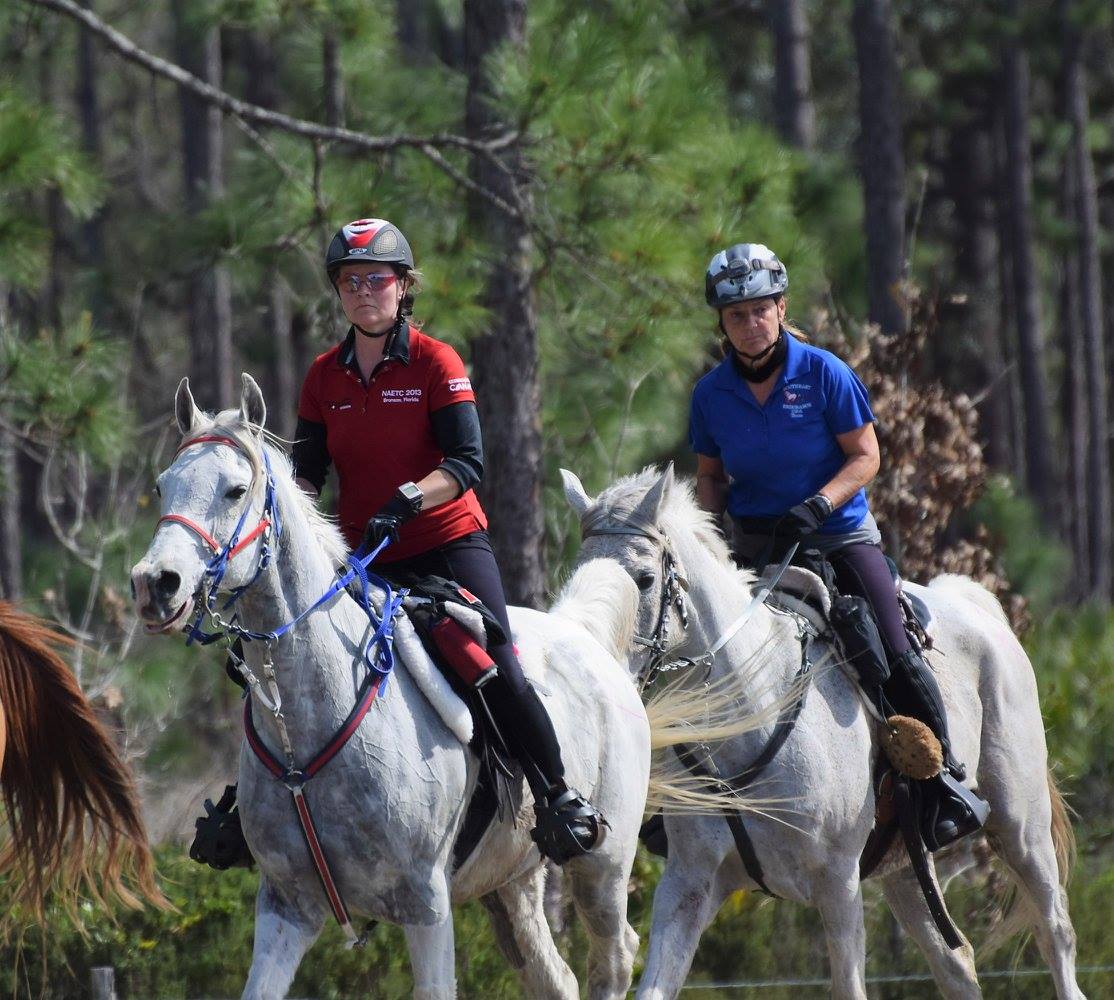 A veteran of the Canadian endurance team, Wendy Benns is no stranger to championship competition. She’s competed in three Pan American Games, the UAE World Cup in Dubai and the World Equestrian Games in Malaysia during her 20 year career. But with no seasoned horse in her stable and a wedding to plan in 2018, qualifying for this year’s WEG is an entirely new breed of challenge. Benns takes us on her whirlwind journey to qualify for Tryon 2018. As told to Carley Sparks.

I wouldn’t necessarily recommend trying to qualify for the World Equestrian Games (WEG) and plan your wedding in the same year—unless you like to take on a challenge!

Each of those things on their own require a tremendous amount of planning and preparation. Put them together and, well, let’s just say there were moments when my fiancé, Jeremy Dupuis, probably thought I was a little on edge. (Or crazy. There’s a good chance that crossed his mind…)

But, in the end, I wouldn’t change a thing. It all came together just perfectly for us!

Jeremy and I were planning our wedding for March in Mexico. It was a destination wedding, so it was a little easier than planning a traditional one at home but it’s still a lot of work. As exciting and fun as it is to dream about your wedding day, a lot goes into pulling all the different pieces together, especially when you have a full-time job—I’m an animal control officer—and a stable full of horses on your property to manage.

I was consumed with all that and really wasn’t concerned about this year’s WEG.

Plus, I didn’t have a horse to do it.

I’ve been competing in endurance or over 20 years. As with any horse sport, always you’re looking to the next horse. For me, that’s usually meant breeding.

We bred my top mare, Flirt with Fyre (an offspring of my Pan American Games mount Flirt with Ecstasy) last year. She just had her foal in June, a chestnut filly that is the first ever Canadian-born/Asgard-bred Arabian. (And gorgeous, if I do say so myself!) Competition-wise, that left me with my upcoming horse Egalite. He only started competing in FEI last year, so my focus has been bringing him along. I figured either the stars would align and I’d qualify or I’d sit out this WEG.

Then the ride on a top endurance horse just sort of materialized.

Synthetic is a tried and true champion in endurance. He’s 18 now and has had an amazing and long career with his owner Melody Blittersdorf. He’s been flown all over the world for international competitions and had top 10 results in all but six of his 28 FEI starts, ten of which were CEI 3* (100 mile races). He’s had a 13 year career, which is just incredible! He’s an Asgard Arabian out of the USA, so he’s Russian with French breeding. He’s just been bred to work at the upper levels.

Melody—she’s an amazing endurance rider—competed with him at the 2011 Pan American Games in Santo Domingo, Dominican Republic. For the 2018 WEG, she was focused on qualifying her younger horse, so she asked me if I would come down and ride Synthetic at FITS in Florida for the 100 mile ride in March 2017.

I was really honored to get that call. Only one rider other than Melody had ever contested an FEI event with Synthetic.

At that point, we weren’t 100% thinking about WEG. I went down a week early to ride Synthetic and talk with Melody about what he needs to get through a competition well. The goal is always to have them finish 100 miles looking like they’ve hardly worked at all. And he did! The race just went so incredibly well and Synthetic is such a lovely and talented horse to be partnered with as soon as we finished and were COC qualified, it was, “Let’s nominate!” 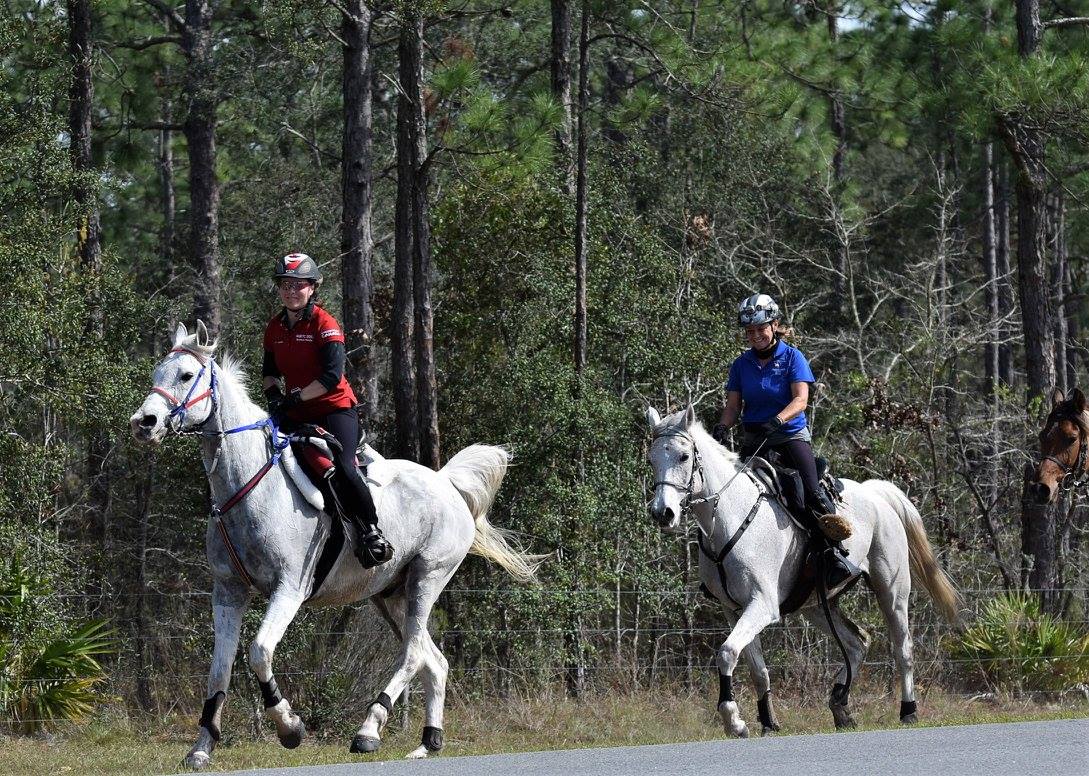 Then the juggling act began.

I’m based in Campbellcroft, Ontario. Synthetic lives with Melody in Florida in the winter. She’s his trainer full-time, so that’s how I was able to manage planning the wedding and preparing a horse for a championship at the same time. She’s does all the conditioning and training work.

I was fortunate to go back to Florida and do some competitions this past spring and they went fantastic. For the first one, I brought Egalite, my young horse, down. He came third in his first FEI 1*. The very next day I rode Synthetic in the 2* and he was first place and best conditioned horse. It was just a magical weekend! We had dry sunny days—you always feel lucky when that happens at an endurance ride. And Jeremy was right there as pit crew looking after us both days.

Not all events are like that. The test event for the 2010 World Equestrian Games was brutal. It poured rain and there were really high winds. The whole vet area ended up flooding, so it was under half a foot of mud. For the crews and the horses, it was a real challenge to get through that competition. And cold! I think I ended up with hypothermia.

At the best of times, endurance is a mental game. On most mountainous tracks, for winning speeds you’re looking at 12 to 14 hours. That’s a long time to be out there. You have to believe that you can go that distance and believe that your horse can too. It’s a test really of you and your horse against the trail. The challenge is all the more difficult in adverse weather conditions.

But when everything is going well, when everything comes together, all the years of training, the equipment is working, the electrolytes are working, the horse is eating well and has tons of energy, there’s nothing quite like finishing 100 miles and feeling like everything just went so perfectly well. You’re just so pleased with your horse and amazed at what they’ve given you, how far they will carry you—willingly.

And some horses have such an insanely competitive drive. They may be leading the event and still just driving themselves down the trail like there’s someone out there to catch.

The past few months, for me, have felt like there own endurance competition.

Synthetic and I did 75 mile event in March in Florida. We finished sixth in 10 hours and 8 minutes. Jeremy and I were off to Mexico for the wedding a couple weeks later, which was absolutely incredible! Then it was down to North Carolina for the WEG Test Event in April (Melody rode Synthetic there) and back home to await our Flirt’s foal in May. It’s been a whirlwind, to say the least! 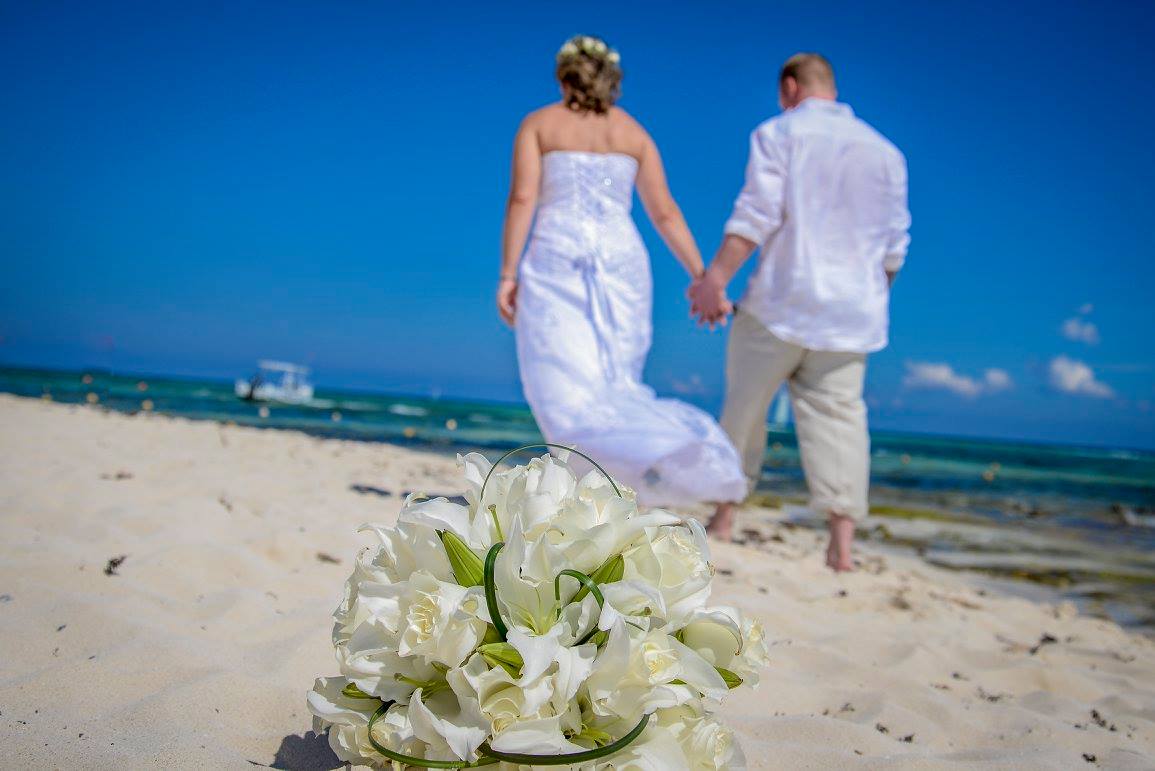 Now that the dust has (sort of) settled, all our energy is focused on qualifying for Tyron and being as fit as possible. We saw at the Test Event that a lot of horses were tired from the hills. The elevation gain is going to be the big challenge, getting the horses comfortable going up and down the hill quickly. And the footing. Depending how much rain they get before, it could make things very slick.

With Synthetic, he spends his winters with Melody in Florida, so he’s training in the sand there where you can do more speed work. In the summer months, he lives in Vermont, so he trains in mountains and humidity, which is absolutely the perfect training for Tyron. So where’s he’s situated is absolutely perfect for this event.

Our immediate challenge though is to get named to the team.

This year, the Canadian endurance team put out the longest short list in history. It’s exciting to see that much interest in the sport. It’s also nerve wracking. There’s still another observation event before the team is chosen. We won’t know until the first week of August who made the cut and there’s a lot of work still to be done.

I think any amateur athlete always probably feels like they are struggling for enough time—enough time to train, enough time for their relationships at home and also if you’re working full time as well. So squeezing everything in can be difficult, you’re up early, you’re staying up late as well. But it’s that passion, that love of the sport that keeps you doing it year after year after year.

Maybe just schedule your dream wedding for a non-championship year.

Asmar Equestrian wants to send you and friend to the 2018 World Equestrian Games in Tryon, NC this September! To enter this month’s #AsmarWEGchallenge, post a short video or photo of your most creative jump to Facebook or Instagram with the hashtag #AsmarWEGchallenge. Each challenge is an opportunity to win the $500 monthly prize in Asmar clothing and an entry for the grand prize of two tickets to WEG, three nights accommodation, a four day car rental, and $2000 in Asmar clothing. What are you waiting for? Take the leap!

Missed the first four challenges? No problem! Every challenge completed is an entry into the grand prize draw: eight challenges equals eight entries! Click on the links to get caught up on Challenge One: Vaulting, Challenge Two: Dressage, and Challenge Three: Eventing and Challenge Four: Endurance!