Preakness 143 May Be a Messy Affair 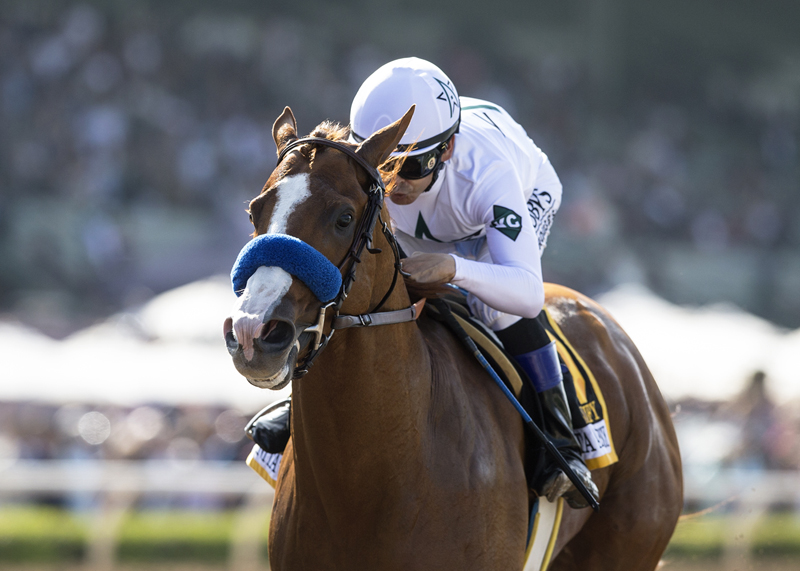 It’s very possible the 143rd running of the Preakness Stakes will be in conditions as messy as the Kentucky Derby.

Rain is forecast through most of the week and on Saturday. Early arrivals have been getting accustomed to the normally fast, now muddy, Pimlico track.

Interest this year, as always, focuses on the Kentucky Derby winner as Justify seeks to gain the second jewel in the American Triple Crown following an impressive 2 1/2-length triumph at Churchill Downs May 5. But, as trainer Bob Baffert notes, “This race is not a gimme.”

Here’s the field in the order of the draw and the post-draw odds, along with some background on the horses that may get him.

The current third choice is no joke. He won the G2 Tampa Bay Derby in March and came back a month later to place in the G1 Arkansas Derby. Trainer Brisset passed on a Derby run three weeks later to give his charge some R&R and the move may turn out to have made sense for those who don’t think the Derby is the end all and be all. (12-1)

If you choose winners strictly on the basis of pedigree, Lone Sailor will be alone at the rear. But he finished eighth in a full-field Derby and was runner-up in the G2 Louisiana Derby. He could be sailing alone on the other end of the finishing order. (15-1)

He’s won or placed in four of his seven starts under Lucas who maintains he “is an outstanding individual” after he was purchased for $5.75K at the 2016 Keeneland September yearling sale. He’s returned $410K of that investment so far. It’s a horse race, so he has a sporting chance. (30-1)

He has four wins under his saddle, including the 1 1/8th mile Federico Tesio at Maryland’s Laurel Park, so he’s the local favorite. Servis says, “He’s right on the money” in training. He’ll have to stretch another 16th of a mile. The upside? Four-time Eclipse Award-winning jockey Castellano, who won this race last year on Cloud Computing. The downside is a third-place finish in February’s G3 Swale and 14th in last year’s G2 Kentucky Jockey Club, run at the same distance as the Preakness. (30-1)

Good Magic had a good run in the Derby and most think he is the only horse that can deny Justify the Preakness after Bolt D’Oro bolted. There is good reason to think he is up to the upset. Trainer Chad Brown brought him early to Pimlico and has been blessed with the kind of training conditions he may face Saturday—very muddy. He’s a son of supersire Curlin, one of two in the race (Tenfold), and they always seem to improve with each outing. His damsire Hard Spun was a tough competitor who was a factor in every race in his career. Reigning Eclipse Award jockey Jose L. Ortiz is the pilot, facing his brother, Irad (Lone Sailor). His chances are real. (3-1)

Tenfold has a thin resume with wins in his only two races but a thick pedigree—another Curlin with the wonderful Tapit as his damsire. It has been awhile for trainer Steve Asmussen since the glory years of Curlin, but Tenfold’s pedigree makes it hard to completely dismiss him. (20-1)

Most analysts agree this is Justify’s race to lose. He’s starting from the same post as his Derby win. With heavy rain forecast perhaps to post time, the Baffert-Smith plan may be identical with their winning one in the wettest Kentucky Derby ever—break well, avoid the early kickback and get in front. Justify broke the mythical Curse of Apollo in the Derby by becoming its first winner not having raced as a two-year-old. Some are proclaiming him yet another Baffert superhorse, but this is only his fifth race so the Secretariat-American Pharoah-Arrogate comparisons are a bit premature. In his favor? Mud. If the weather prediction holds up, this will be the third of his five races in the slop—he’s probably beginning to think this is normal race conditions. Also in his favor is Baffert’s string of never having lost a Preakness with a Derby winner (Silver Charm, 1997; Real Quiet, 1998;  War Emblem, 2002; American Pharoah, 2015 ) and winning two other Preakness Stakes (Point Given, 2001; Lookin At Lucky, 2010). Then, there’s Mike Smith, “Big Money Mike” as Baffert likes to call his Hall Of Fame rider. (1-2)

The view of Calumet Farms when you first enter Lexington, Kentucky is the poster card for racing fans and D. Wayne Lucas is a Hall-Of-Fame trainer. So it stands to racing reason that fans with a long racing memory will have a sentimental favorite here in this Calumet homebred. He’s won three of ten races including the Risen Star and finished sixth in the Kentucky Derby from the 13 gate as a 50-1 choice. Experience and grittiness are no issues, but the post position may be. Following the draw, trainer Lukas said, “My horses are in deep doo-doo.” (20-1)

OK, let’s break this down. Only four horses in the past 34 years have won the Preakness without having run in the Derby. On paper, that eliminates Quip, Sporting Chance, Tenfold and Diamond King. That leaves the two favorites, plus Lone Sailor and Bravazo. While it seems sacrilegious to go against Justify, especially in light of the Baffert-Smith team record, the Derby was very competitive until the final eighth of a mile. So be looking for Good Magic to have some at a shorter distance and, just as the Curse of Apollo was broken in the Derby, look for Quip or Diamond King to possibly add a fifth win for non-Derby runners.