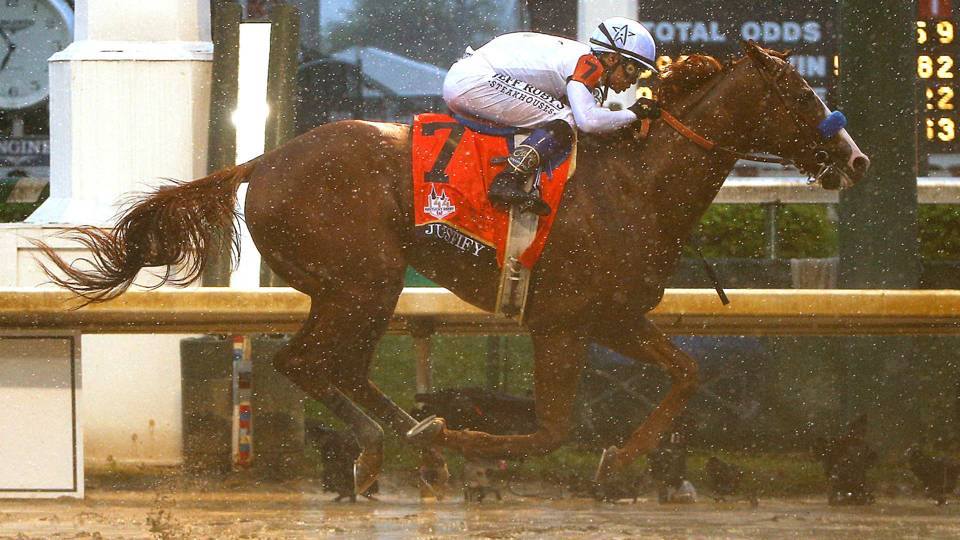 In now-familiar muddy conditions, with an added dose of fog shrouding the track, Justify barely put away Bravazo by a half-length in Preakness 143 to set up a fairytale storyline for Belmont Stakes 150 on June 9 as he attempts to become the 13th winner of the American Triple Crown and the second for trainer Bob Baffert (American Pharoah, 2015). Lightly raced Tenfold took third.

“That was a hard race on him today, probably the hardest race he’s had,” said Baffert.

“He got a little tired,” confirmed jockey Mike Smith.

The race began as expected, with Justify breaking cleanly and heading to the front under Smith as he did in the Kentucky Derby. In the 1/8th mile-shorter Preakness, Chad Brown-trained Good Magic got inside position on the rail and put a head in front rounding the back turn. But, as he did in the Derby, Mike Smith found another gear in Justify as they entered the stretch to bring home a hard-earned victory in front of a tight pack of competitors in 1:55.53.

Perhaps reflecting the weather conditions, the time was nearly a full three seconds slower than the record 1:53, held by Secretariat in the 1973 Preakness.

Given a surprisingly close race against what was seen by many as a relatively weak field, Justify is certain to face a loaded assemblage of competitors three weeks from today at Belmont.