At the Rio Olympics in 2016, Canadian dressage rider Belinda Trussell set two new records for Canada in the Grand Prix and the Grand Prix Special with her famed partner Anton. Now the Pan American silver medalist has her sights set on the 2018 World Equestrian Games in Tryon, NC with a horse named Tattoo 15 — if they can avoid disaster long enough to get there. Trussell recounts their rocky journey to the CDI ring. As told to Carley Sparks.

It’s a funny story with Tattoo, because it’s definitely been a roller coaster ride for the past five years.

But then, it’s a funny story how we came together in the first place.

Tattoo was in Germany. Bred by George Theodorescu and developed by his daughter, Monica, a three-time Olympic gold medalist, he was trained up to Prix St George. When Monica got the job as the German team trainer, she had to sign a contract that she’s not allowed to compete internationally. It was a four-year term and Tattoo was already 10 and showing promise as a Grand Prix prospect, so she decided to sell him.

For me, at that time, my top horse, Anton, was lame. He’d had a year of treatment and it didn’t look like he was going to come back. We thought his career was finished. So Christilot Boylen, my coach, went out and she found Tattoo. She said, “I think this is a great horse. I think this is the one you need to look at and to buy.”

It was a big decision for my husband and I.

We didn’t have Grand Prix dressage horse money in the bank. Buying Tattoo meant that we had to sell our house in the city and move back to the farm. It was a big deal.

Well, the day we sent the money over for him, Anton was sound. It was just like, “Okay, is this fate? I don’t know what this means.”

That was the start of our journey.

The next few months did little to assure us that we’d made the right decision.

Tattoo was wild when he first arrived! I was a little bit nervous to ride him every day because he’s so athletic, he would turn himself inside out. If a horse left the ring, it’s “OH MY GOD, I CAN’T BE LEFT ALONE!”

He wasn’t the easiest horse to work with either. He bites and he kicks and does all these things, but not in a mean way. He does it in a “I’m not okay right now. I have an itch on my side. There’s a fly here! CAN’T YOU SEE MY FLY?!”

He was so erratic, it was hard to understand him. It was like, is he just crazy?

If I knew Tattoo then like I know him now, he’s an emotional horse. He’s extremely extroverted and he’s sensitive and he worries. He had a really hard time adjusting to his new life in Canada. Here’s a horse that had been with Monica his whole life, under her system, used to the way she runs her barn. Then he comes over to North America on an airplane—he’d never been on an airplane—he’s in a strange country, strange smells, different food.

And it was too much.

He colicked in the first three months and had major colic surgery.

When I talked to Monica about it she said, “You know, he’s just homesick.” And I believe her. I think he was just really homesick. He missed her and he missed his life there.

It was a six-month process to get him better again. 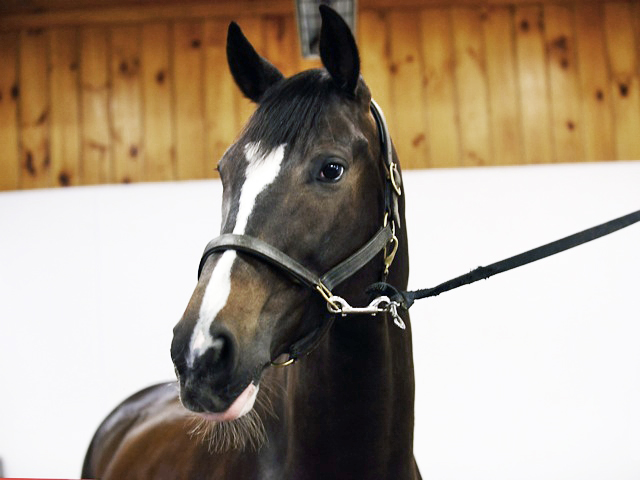 The second year, we didn’t fair much better. Tattoo developed allergies and coughed. He just coughed and coughed. I had a really hard time working him because he couldn’t breathe. He was coughing all the time.

That’s something I still have to manage today. He’s on hay cubes and special bedding. I have to watch the amount of dust around him. He’s turned out for most of the day, often 14 hours a day.

Then, from being turned out for as long as he is, he developed sore feet. So we had to deal with that.

It just felt like one thing after another — and not just little issues, major issues! I sold my house and he’s coughing, he’s colicking, now he has sore feet.

On top of all that, he just couldn’t get the one tempis! Normally, when you’re training the ones, if you can train three, you often can get 15. Well, with Tattoo, I could train seven. But not eight. He was just very difficult with understanding that. The whole time I’m wondering is this horse going to make it? Is he going to be Grand Prix or not?! 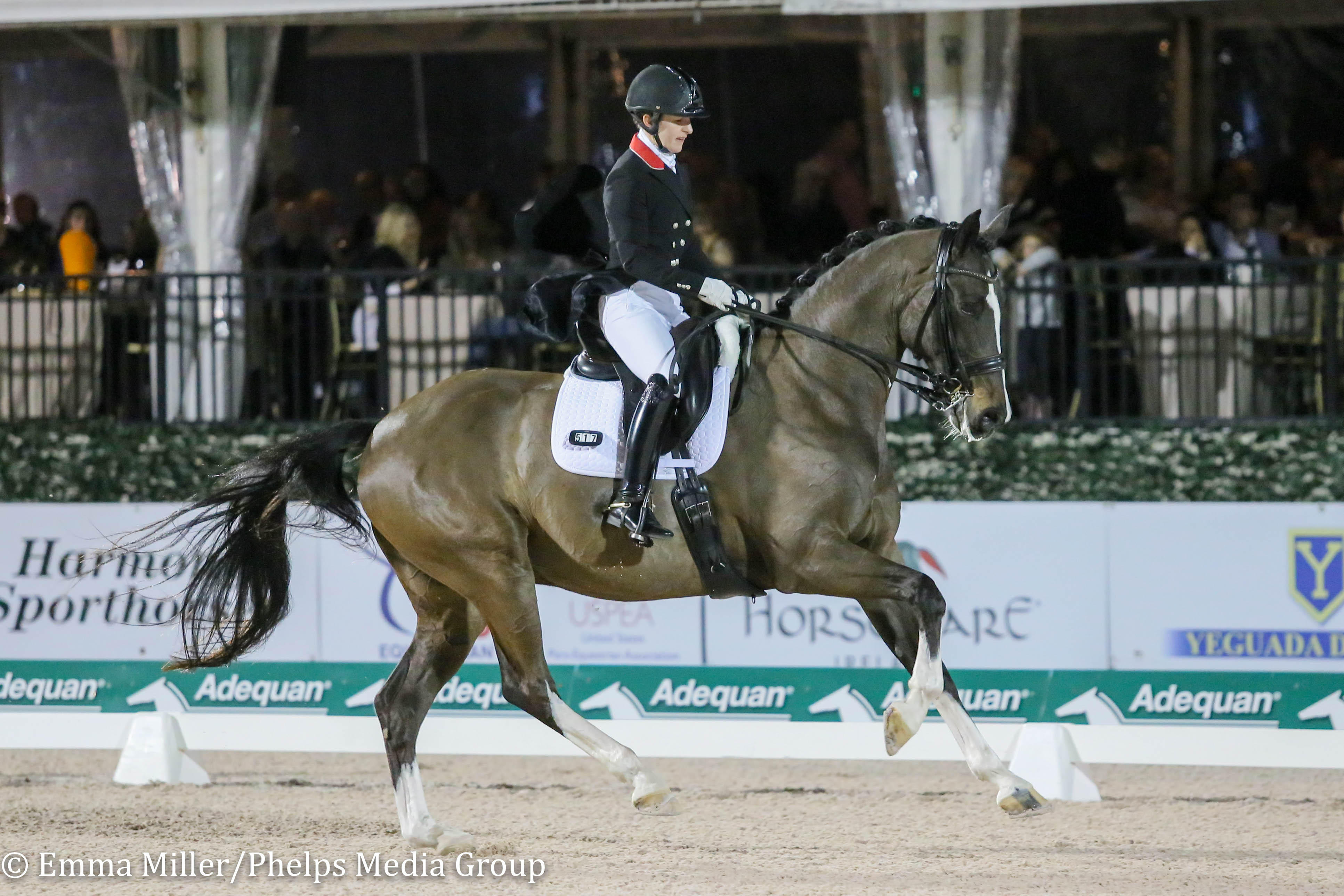 In the beginning, Tattoo had a hard time and he missed Monica but now we have a very special bond. I love riding him and I feel he tries really hard for me. Now, if I get clean ones in the ring, I’m getting 8s and 8.5s! It’s such a highlight for him.

It was such a change from Anton, who’s a competitor at heart. With Tattoo, I feel like my role is emotional support. I need to be his leader and hold his hand and say, “Come on, we can do it. Let’s do this together. You’re good at what you do!” And I know he loves it. I feel it from him that he loves it. He’s not as confident inside as Anton is naturally and he takes that from his rider.

It’s been a long journey with Tattoo and we still have struggles. Last year, he got skin sensitivity and lost all the hair under the saddle pad and bridle — I told people he’s my Dalmatian. He’s just my sensitive horse.

I’m sure there’s going to be something next! There always is. But whatever it is, we’ll figure it out.

Because that’s what you do.

Everybody has hurdles in front of them. Sometimes people let the hurdles stop their dreams. But it’s not about the hurdles, it’s about how you jump them. My motto is “The solution is waiting to be found.” You just keep fighting for it, finding your solutions. Life isn’t meant to be straightforward and simple. That’s what makes it challenging and rewarding and special and it’s why winning a gold medal is so incredible — because of all those hurdles you jumped along the way. And you did it! You did it.

I always say to have a Grand Prix horse is a gift. They don’t come around every day and if I hadn’t persevered with Tattoo, then I wouldn’t have one right now and I’m so grateful.

Belinda Trussell is aiming at the 2018 World Equestrian Games in Tryon, NC. Asmar Equestrian wants to get you there too! Enter the #AsmarWEGchallenge for a chance to win two tickets, three night’s accommodations, four-day car rental and a $2,000 Asmar Clothing Package! Plus monthly draws for $500 Asmar Clothing Prizes! (Full details available at AsmarEquestrian.com)

This month’s challenge is for the multitasker in us all! Asmar wants to see a short video or photo of you performing three tasks at once. Post it to Facebook or Instagram with the hashtag #AsmarWEGchallenge for your chance to win!

Missed the first two challenges? No problem! Every challenge completed is an entry into the grand prize draw: eight challenges equals eight entries! Click on the links to get caught up on Challenge One: Vaulting and Challenge Two: Dressage!